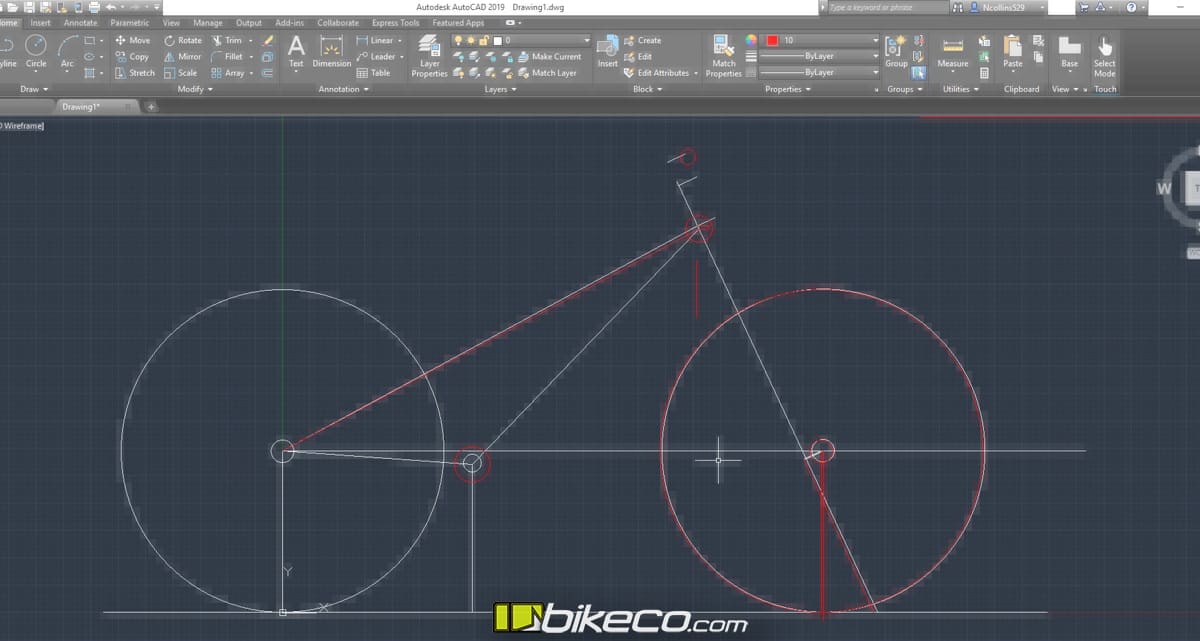 I wrapped up the 150 vs 160 comparison and needed an image. I grabbed BikeCo’s demo SB130 (with a stock setup) and mine with the 160 fork and headed out. And struggled. I couldn’t get an image to show with any level of credibility the difference in crown race height. With a 10mm steer spacer in hand I tried to figure out how to photograph such a small difference.

Some quick math said the axle to crown height difference when the forks were standing straight up would be only 1.76%. Less when you factor in the headtube angle when viewed straight on.

Intrigued I downloaded a trial of AutoCad recalling my old design days.

I recreated the stock geometry of the SB130 and then modified it with a 10mm taller axle to crown. I used the CAD images to help define where the differences actually were, and, somewhat begrudgingly at first went and found the formulas to double check what I was seeing.  Although admittedly I was excited when the math put the CAD drawing accurate within 0.1% – (for instance CAD 119.5mm vs Formula 119.63mm).

The differences seem very minute compared to what you feel riding on trail. How can I feel a distinct riding difference in the front end of my bike when I really only raised the front end about 6.8mm if measured perpendicular from the ground?

Let’s get a disclaimer out of the way so my inbox doesn’t explode. This study ignores the system in sag, or at lean angle which will compound the changes in my opinion. That said, I feel it does display some interesting factors of change.

Deciding I was unimpressed with such small measurements I reviewed the percentage of change across effected measurements. This helped me understand what where the tangible personality changes are most likely occurring. 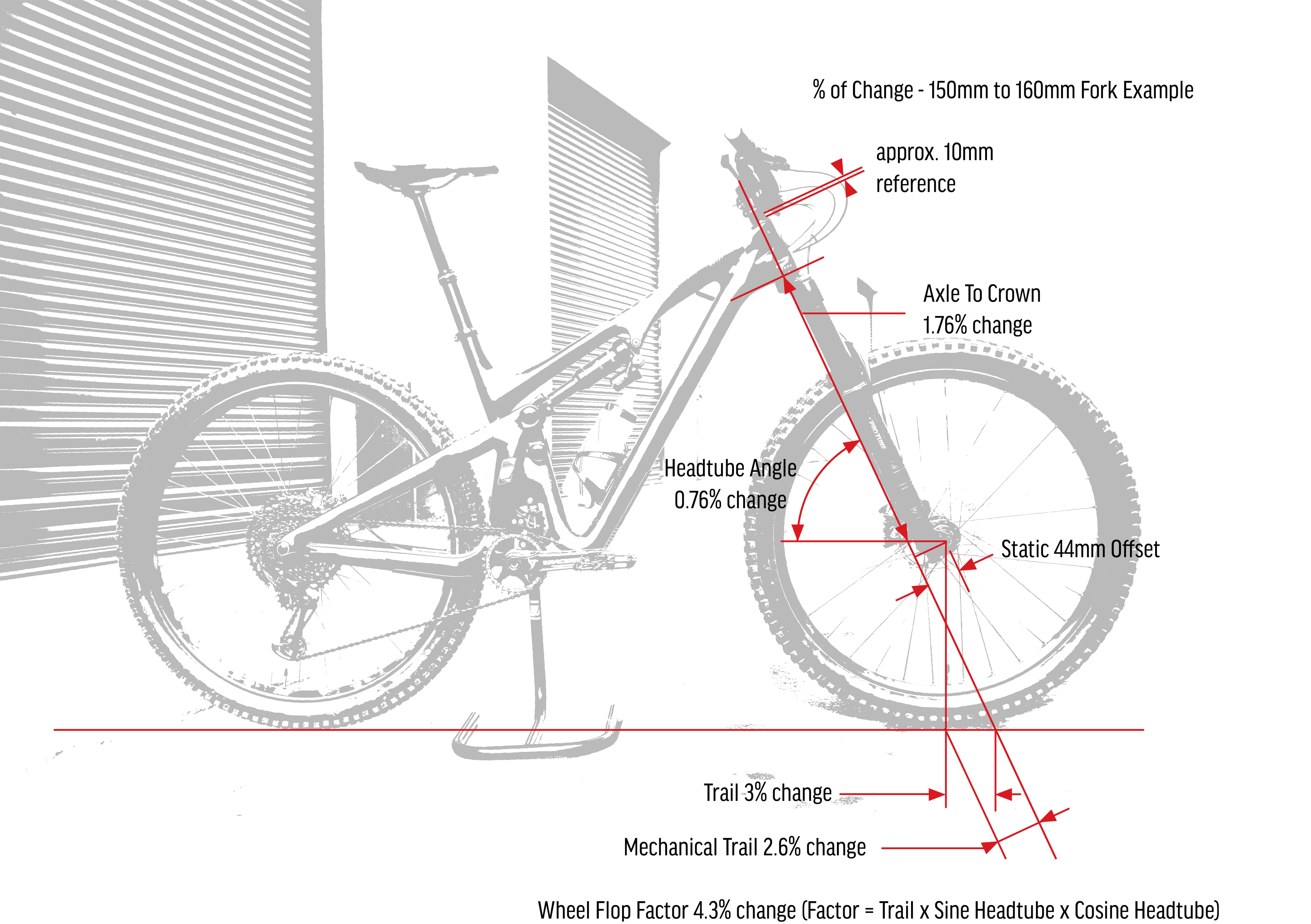 So, here we go. The axle to crown distance was referenced above as 1.76% difference. Let’s continue with the talked about, in fact often vehemently argued about headtube angle. Close to a  half degree was the shift in the CAD model. This factored out to a 0.76% change. Well with the longer fork I feel a difference, but I just don’t think I’m good enough to feel sub 2% changes. Right?

Continuing down the rabbit hole I looked looked at the trail, mechanical trail and wheel flop. Here’s where it started to become more interesting to me.

Trail – the horizontal measurement between a line straight down from the hub center to the ground and the steering axis’ imaginary contact point with the ground. Our fork modification changes the trail measurement by 3%.

Mechanical Trail – the perpendicular dimension comparing the contact points between the steering axis to the hub’s vertical ground contact. Mechanical trail was slightly less affected at a 2.6% change.

Flop Factor – google this one if you want, Wikipedia has a good explanation. Essentially it’s a measurement of movement if you input a 90 degree handlebar input, which you wouldn’t really do – but it’s a clean comparison number.

Greater wheel flop means the bike’s geometry will be more affected from steering input. The fork comparison created a 4.3% change in the wheel flop number.

Well, 3 and 4% changes start to make sense on what I think I can feel riding a bike.

There are a lot of other factors involved with why bikes will or won’t accept geometry changes. Riding style, aggressive on the bars versus further back over the rear tire, cockpit height, etc all make a big difference and will be explored down the line.

Some other interesting numbers from this exercise:

Wheelbase – the 160mm fork increased the wheelbase a mere 0.3%. This suggests any “longer” feel is from the trail / flop characteristics.

A change that I found interesting in the CAD model was the crossing point between the steering axis and the hub vertical. While this only changed 1.2%, slightly over 3mm taller for the 160mm fork, I imagine that this and the trail play a large, large role in front end personality.

I hope this exercise provides readers with a bit more understanding of some of the factors that go into a modified geometry beyond “what’s the headtube angle brah…” As mentioned before there are a lot of other factors that go into how your bike handles and we plan to explore more of them in upcoming articles.

See you on the trails – Nate at BikeCo.com