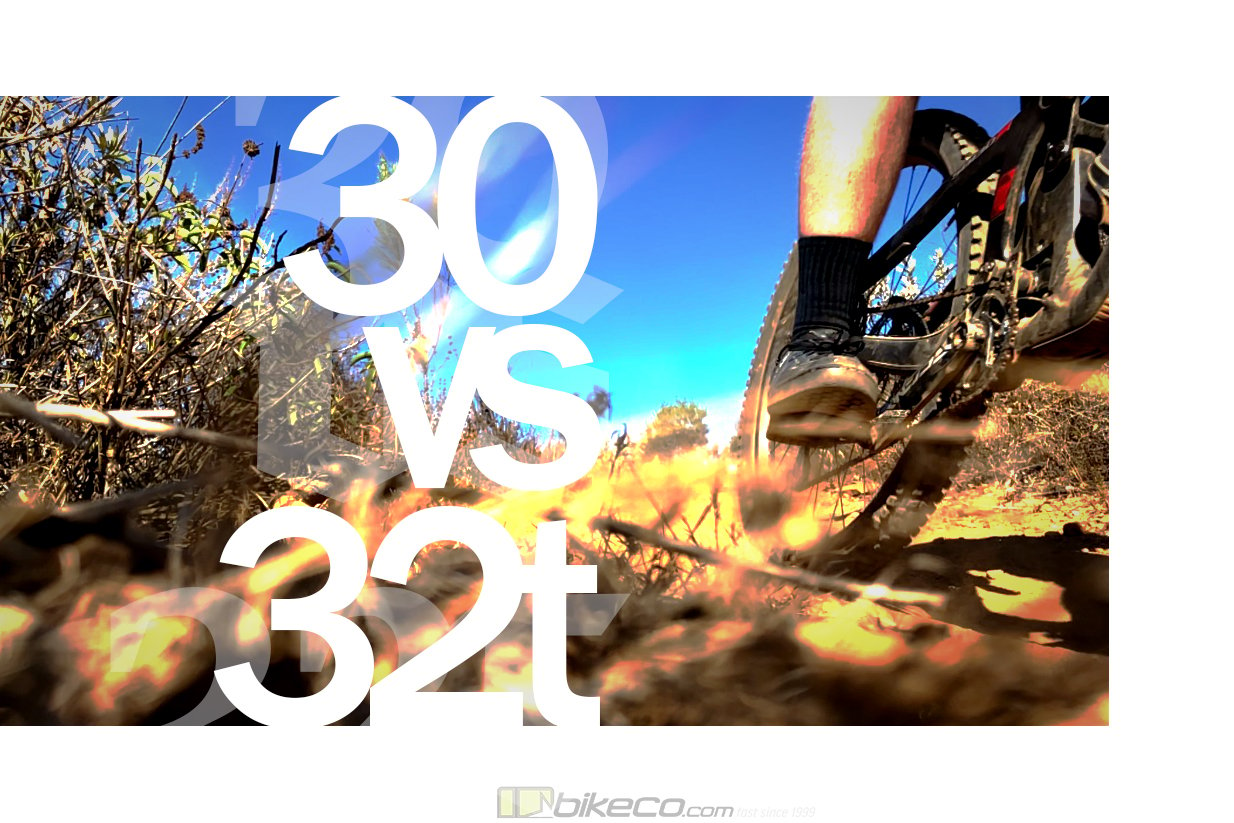 We get a lot of questions on chain ring options. So when my old cranks finally gave up the ghost, press-fit eventually gets sloppy and the creak / get loose often, I decided to go to a bigger ring. So here’s a 30 vs 32t comparison – from someone who’s never, never been a climber.  Keep reading – it’s more than a saga of pain and suffering…

My last couple bikes were 27.5″ setups so I ran a 32t Eagle setup. This gave me a pretty solid balance.

When I went to my SB130 I decided to give myself a bit of an easier gear to compensate for the larger wheel uphill. Wait, 29s are faster rolling right so wouldn’t you go bigger? Not exactly. 29s roll faster and maintain more speed on flats and most climbs until you go anaerobic. Now that is a moving bar and varies both rider to rider but possibly even day to day. Point is – when you have power to hit the gas the bigger wheels are easier. When you’ve barely got power to spin the wheels? Longer leverage as well as added mass (more rubber) of the 29s isn’t as “fast”. This is a big reason you see even strong riders spec’ing smaller rings on the 29s so they can spin on climbs.

So did I decide I was giving up speed with the 30t? Not really. Did I decide I needed an ego boost? Far from it I’ll hike a bike if I think it’s faster or I’m blown out. I just wanted to see where the differences might lie for, well, probably a slightly below average climber. I hoped it wouldn’t be “well this is un-rideable” hahaha…

My initial concern was that it would put what I consider “average” climbs into a full make or break effort. If you’ve followed my posts over the years you know I don’t go to full failure anymore – and my lower back really does appreciate it. If its getting close to that point I’m hoping off to hike it.

I first rode the 32t on my new local loop here in San Diego in the Mission Trails. Nothing really long and sustained as a climb (except right out of the parking lot…) but here’s a handful of short, punchy switchback sections.

The initial climb from the parking lot had me intimidated a bit. It’s not super bad but its right at the launch and just enough to be a bit of a grind. I figured I could get up it no problem but how much more effort was it going to be? Was it going to mess with my, shall we say, delicate climbing stamina?

Pretty obvious conclusions on the climb. I had to put a bit more effort into the system to maintain that happy speed to efficiency feeling. I’m not sure how to exactly term that by the way. You know where you find a cadence / power balance where if you dip below it it’s somehow no less painful but the efficiency drops notably? That’s kind of what I mean.

While the 32t took that bit more energy to keep it at that pace it also got me to the top of the hill slightly faster, thus suffering slightly less? Well across the easier climb / false flats I thought OK, research done. But it wasn’t in the grind climbs that I really noted the difference. It was in “explosive” climbs. Forgive me if you’ve seen me climb and are laughing at the thought of an “explosive” section for me – but let me explain.

So if we’ve given up some of the spin, ease up the grind hills what did we get? Lotta people are going to tell you more on the downhill. Technically ya. But it’s more than that.

What I most noticed, most appreciated going to the larger ring was how the bike behaved getting on the gas in switchbacks or technical areas of the climb. That little bit of extra effort produces a nice boost of speed which greatly helps with both balance and attacking terrain.

Can you do it by spinning a 30t faster in the same gear? Ya, I’d imagine so. But it seems like a notable enough difference with the 32t. I get that momentum without my legs spinning frantically. Somehow advice I’d gotten years ago started making more and more sense, particularly about climbing switchbacks. Roll up, jump on the power and ride through em. Well with the additional teeth if you can jump on the power the momentum does really give you a “ride through em” advantage.

Downhill I noted a bit of the same thing. Jumping back onto the power took a tiny bit more effort but resulted in additional acceleration for sure. I’m not the guy that’s spinning out a 30/10t combo anyhow so I can’t comment on that. Maybe next time I do the Luge I’ll sprint down the road to see.

The real area of appreciation was in semi-technical (not just grind) climbs for me.

Should I Stay or Should I Go

aka iTunes is heavy on The Clash today on my mixes.

I’m not going to be the guy changing rings between rides, that I can tell you. No knock if you’re that guy – but I’m the: here’s my window to escape I’m grabbing my bike, and hoping a pump, some chain lube and a helmet are in the truck or hanging on the bars…

I saw the downside grinding out a Mustard climb in Whiting with a buddy this weekend. I’ve been riding a lot, I have to work super hard to keep up with him in the flats, it was hot, excuses, excuses, but I gassed a bit on the last chunk of the climb. Probably could have slowed down and maybe done some S’s up the trail for a minute or two to regain it but I didn’t. He’s still gonna drop me but maybe I could have stayed in it a bit longer if I could have just spun a bit higher cadence.

Right now I’m leaning on keeping the larger ring at least for a while. This is based on a couple factors. One, it’s not like the first time I’ll ever have to hike something if I pop on a climb. Two, and more importantly at least for now, I appreciate how it helps through the more technical climbs. That’s been different and fun for me.

So if you’re debating “the climb” versus “the descent” split up “the climb” into sections when you compare chain rings!

Maintain your 12sp drivetrain with BikeCo’s Builder! Pick out the bits you need and get a personalized price quote.