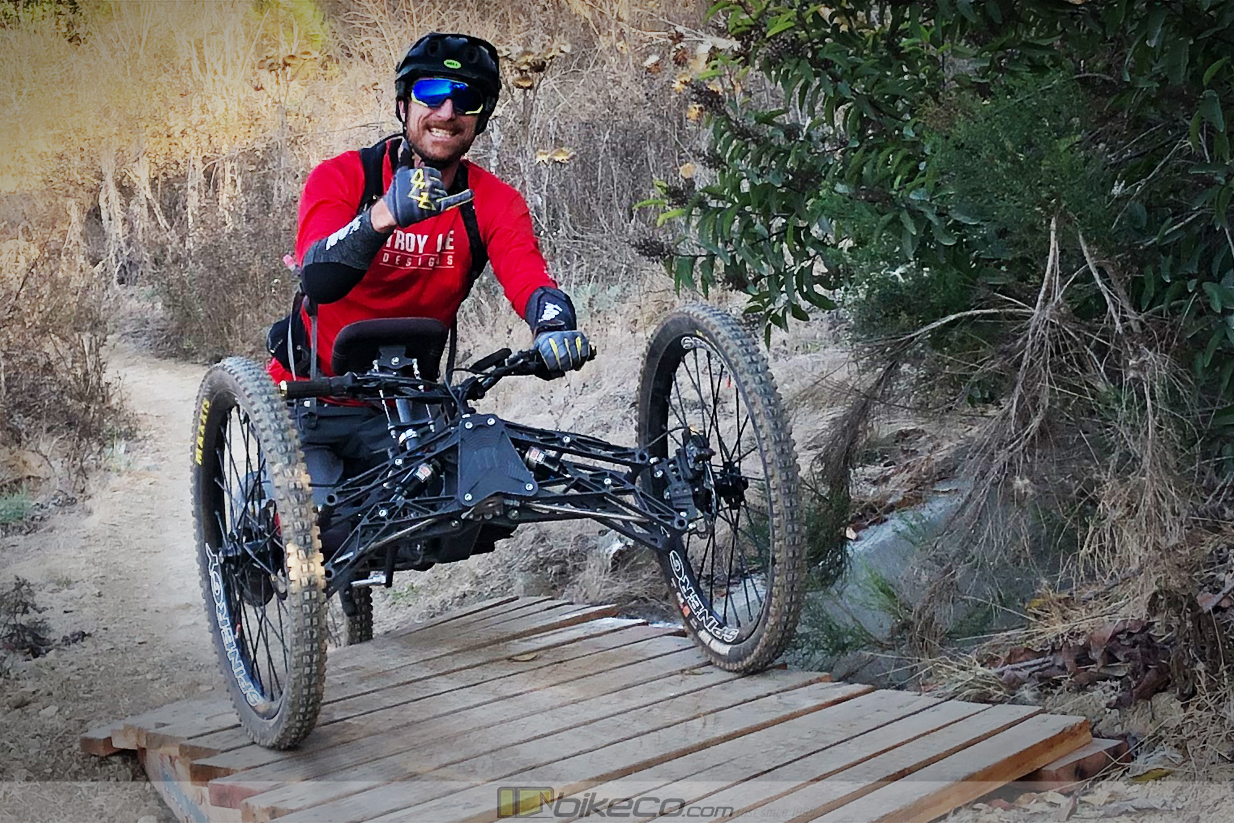 An introduction to Adaptive MTB with Jeremy McGhee

Recently I had a chance to hit the trails with Jeremy McGhee a rider on the cutting edge of the adaptive, or AMTB.

Jeremy and TrailForks are working to identify which trails are friendly to adaptive riding. Recording rides on a GoPro Jeremy documents a wide range of trails across the country. Terrain that’s fun, challenging, or in some cases impassable. Providing this data on his YouTube channel and through TrailForks rating system allows other adaptive riders to plan fun and adventurous rides without as many of the pitfalls he has experienced.

Pedaling a loop at Black Mountain in San Diego was a real eye opener to challenges, capabilities and potentials in adaptive off road riding.

To begin, let’s get this on the table right here, it’s not the goal of adaptive MTB to make every trail accessible. No one is going to widen all the narrow, steep, tight switchback singletrack out there. Simmer down.

However, providing AMTB riders knowledge of accessible trails means more people are able to enjoy the outdoors. Being outdoors, interacting with nature and the adrenaline riding bikes are important to me. I’m all for what Jeremy and TrailForks are working on. I believe that adaptive MTB opens the door outdoors to people who might never have enjoyed it. If my world suddenly stopped where the sidewalk ends, well, I’m not sure I’d deal real well with that.

We met at the trailhead. Admittedly I wasn’t super sure of what my role would be. Turns out it was just Jeremy and I so I would be his support rider.

“Sometimes I might need a push up a climb, particularly like a rock ledge. My bike has a hard time up steep ledges since the weight isn’t on the rear wheel”

Hm, sometimes my bike has a hard time up steep ledges because I’m not in the best shape…

“or I might need a reset once in a while to get my rear wheel around a tight switchback.

Also it helps having a spotter on off camber stuff.

I’m not sure if you saw my instagram with the helicopter last time I was here. I rode solo and ended up off trail. No one came, so I called for help. Funny how much shit I got about that, like real deal gnarly hate from people.”

I thought about my “love” of social media and some of the brave interactions I’ve seen. I was blown away to hear people would go out of their way to harass a paralyzed rider.

Anyhow. Most of those people aren’t outside – which is why I love being there so much. I was excited to learn about out Jeremy’s program to help more adaptive riders get out there. And I was stoked to get out for a Saturday pedal. All wins.

We pedaled and chatted up the first couple climbs. I was blown away watching Jeremy navigate from both hands pedaling, one hand pedaling one hand steering, or popping up to get on the bars on the quick descents.

Jeremy explained that he had ridden Black Mountain a couple times and thought that a clockwise loop on Manzanita would work better than counterclockwise which he had done previously.

Jeremy and I looped through Little Black Loop, Manzanita Loop (Clockwise), over to Nighthawk trail, and down Miner’s Ridge (my favorite in that park).

It was really intriguing for me to sight a feature and try to deduce if it was going to be an issue or not. Equally interesting was how narrow of a trail Jeremy’s setup could handle. I didn’t measure it, but his front wheelbase seemed just a bit wider than my bars.

A couple ledge-y climbs were easily negotiated. One or two notably steep ones required a quick push. Notably steep like I was hiking up them either way. As a side note Jeremy harassed me for walking up them saying I was showing off. I told him I’m quite vain and had to peacock where I could. We had a pretty good laugh.

It’s a one rider sample size – but I’m guessing people brave enough to ride adaptive MTB are adrenaline, outdoor junkies stoked to be in nature and having a good time just the same as my 2 wheel riding buddies.

Jeremy impressed me as we rode down some fun rocky sections with the famous San Diego waterbar drops (I swear they’re everywhere down here).

On one of the first descents when I noticed how the 3 wheel design challenges AMTB riders.

The bike doesn’t “lean into” the turn when cornering, or on off camber sections. The wheels actually “lean” the wrong way. This creates issues with how the weight vectors down with gravity. The wheel’s force is pulling you the opposite way compared to a two wheel bike. On bermed turns the three wheeler is not effected. In open terrain with flat or off camber corners it is. 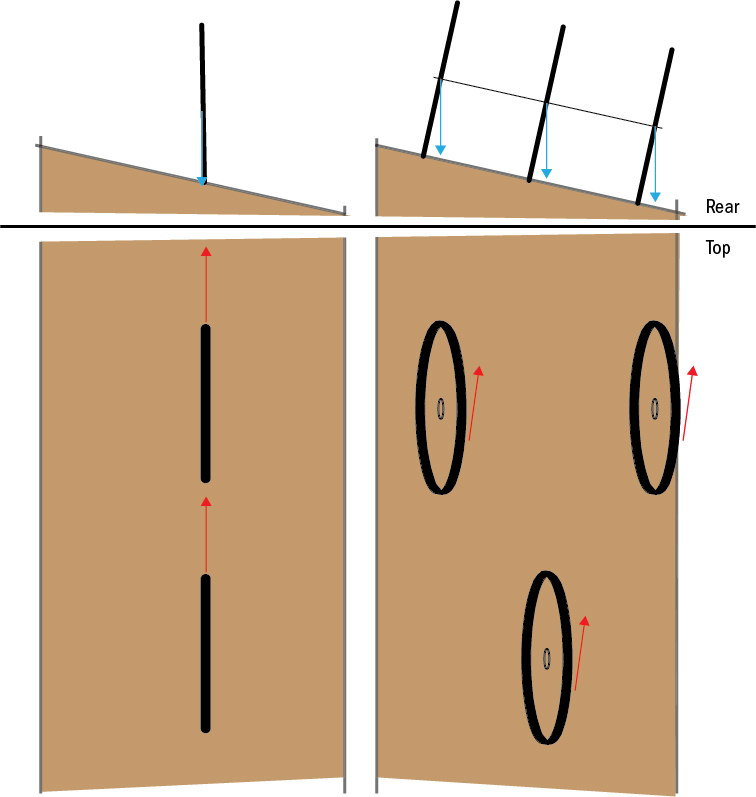 Excuse my basic reference sketch above.. blue arrows illustrate the pull of gravity and red the “pull” of momentum. You can see how the 3 wheel system requires more attention off camber.

I watched Jeremy huck the bike into a series of quick turns at speed. The rear wheel seems to drift off exaggerating the front wheel’s tracking radius. Couple this with it counter intuitively driving off rocks or lips. Your two wheel bike leans in, hits the rocks and punches into the corner with the lean. The three wheeler punches out of the corner. I could see where this would be intimidating to a new adaptive rider to understand and deal with. Jeremy assured me you pick it up quick. Again I thought, well, sure is better than doing laps around a mall…

Engineering students / scholars – let’s see some designs with improved mechanical (or for the young guys I guess computer controlled) lean systems! I sat up a couple evenings sketching suspension that would somehow pull the chassis against the gravitational forces to compensate (I used to design hot rod / custom car suspension) but haven’t come across the answer. Someone smarter than me should!

After watching the bike’s personality it didn’t surprise me that the first place Jeremy needed a spot wasn’t particularly technically burly. It was off camber, slightly narrow with a high and low line. On two wheels you could choose either. On three you choose both.

“So here’s a tight section for me. Can you spot me? Just make sure if the bike starts to lean downhill you shove me back the other way that works best.”

I’m not going to lie I was a little worried about the whole shove thing at first. But hey. If someone asks to get shoved who am I right?

The first couple sections my spotting was limited to watching. Then on one I did have to work.

The bike lifted a wheel and quickly began to rotate on its axis headed downhill off trail. Much faster than I thought it would. A quick push and Jeremy back was back on the trail and that was that. But it illustrated how it quickly  an adaptive rider could end up off trail.

I spotted as Jeremy sighted his line. He committed, rolled in and pedaled out. No shoving from me to keep him on the trail. Redemption. I heard the classic MTB excited yip.  I turned to walk back to my bike. And fell down the goddamn side of the hill. Jeremy laughed pretty hard. I’m praying he didn’t capture it on GoPro.

The rest of our ride was fun. An occasional spot, an even more occasional wheel reset to keep him from “Austin Powers turns” (backing up using his hands on the front wheels then pedaling forward repeatedly). It was a solid loop on a sunny day in San Diego.

We finally came across Lilac Canyon which had slightly too narrow of bridges for him. We rode through a parking lot and dropped onto the road to Ahwee trail. 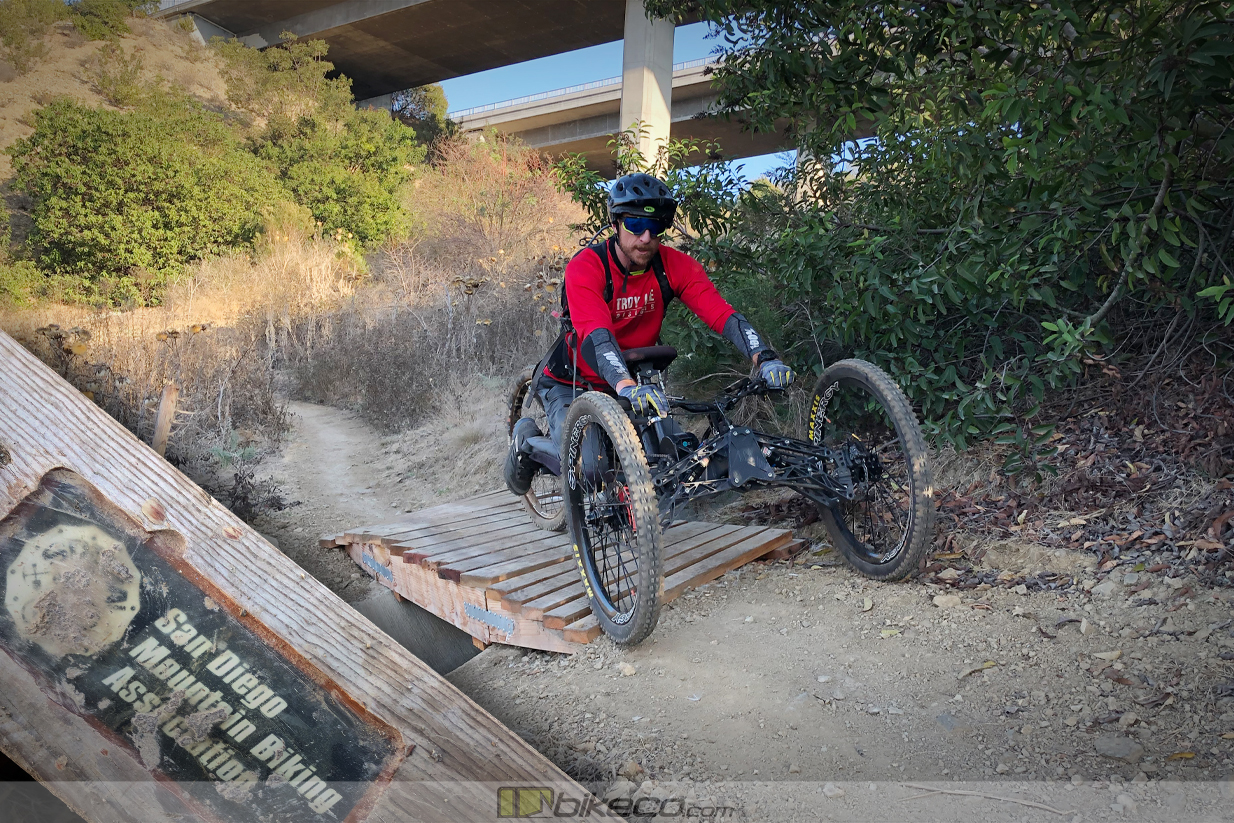 Ahwee trail had become AMTB friendly simply by widening a bridge over a water run off. Which apparently had again drawn the ire, I’m assuming of people who aren’t familiar with adaptive riding, thinking it was making the trail too g-rated I guess. None of the rest of the trail was different than I recalled from previous rides. Just a bridge which accommodated a wider track setup.

We weaved back to the cars and came across a variety of trail gates. Some Jeremy ripped under. (One or two that I thought, ‘hm, that guy’s about to smack his head on it’ – but he never did) One that he rode between the “v” . Over the diagonal gusset bar from the vertical pivot to the horizontal beam. That one was impressive.

Then we came across a couple we got stuck at.

Now, I understand gates. But it kind of blew me away the access was narrow enough that we had to find other ways around.

Jeremy’s setup isn’t super wide so a car, not even a golf cart, is fitting through a gate that’s adaptive friendly. We backtracked and found ways around a couple. We lifted the bike through one. And, ah, well we found an “easement” on one. Luckily San Diego’s MTB community has been actively documenting these issues to produce more adaptive friendly access.

The Stoke Is Real

We wrapped up our ride and like most MTB adventures sat and bullshitted at the cars for a bit. It was a fun day for sure and I would 100% do it again.

We chatted about San Diego trails (I’m new to the area so mostly listened) as well as OC areas to check out. After seeing what Jeremy as an adaptive rider was capable of the list of trails that are a lot of fun for me and would be a lot of fun for him, without ANY modification, is pretty long.

Keep an eye out for more on AMTB. Get involved sharing the outdoor experience with people who might not know it’s accessible. Spread the stoke. It’s worth it.

(Jeremy and I chatted about a ton of stuff but not really about what got him into AMTB strangely. But he’s clearly enjoying the adventure, peace and access to nature it brings)

See you on the trails – Nate at BikeCo.com

Check out more about Jeremy’s project at The UNPavement.com