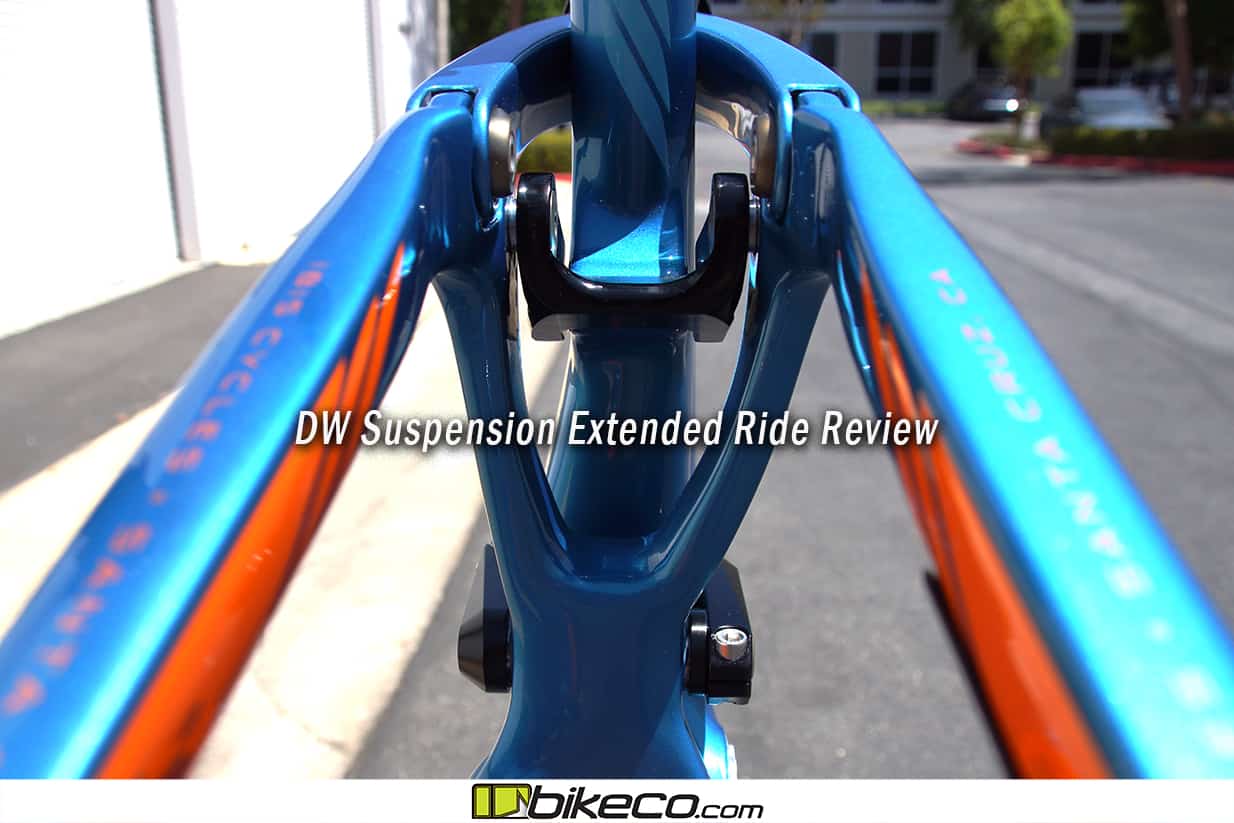 With the Ibis Demo here at BikeCo we have a lot of new faces coming into the shop. Many of these riders have advanced past lesser suspension systems and researching the leading options. Let’s take a look at what they can expect with a DW Suspension Review.

My DW background: I’ve been riding an Ibis HD4 for about a season and a half. I’m also spoiled, I can jump on demos for quick “marketing” loops when they’re here… I’ve spent considerable time on the early Mojo and Mojo HD too. I feel very confident speaking on the DW suspension.

The early DW (Dave Weagle) Suspension on the original Mojo’s was good. The modern DW is better.

With each advancement to the DW system, as well as damper improvements, small bump compliance has improved.

However the most notable update to the modern DW Suspension is it’s efficiency much deeper into the bike’s travel. Efficient into the 50-60% of travel the DW linkage allows riders to aggressively jump on the power out of corners. DW bikes are well behaved during standing climbing as well.

Balanced. Behaved. Predictable. Confident. All words I would use to describe how DW suspension rides on trail. When you add all of those words up you get “fast”.

My previous VPP bikes required a lot of front end input to keep the bike from “pushing” over under-steering through corners. If you sat neutral in the cockpit the front end simply didn’t want to bite during direction changes. Riding front heavy provided more front end tracking at the cost of feeling somewhat twitchy as I lost the balance to the rear wheel. Not so with DW suspension.

DW linkage allows riders to stay central, get low on the bike and focus more on lateral weight changes.

Since DW is suited to central riding positions they make a lot of sense for smaller riders as well. Shorter or lighter riders don’t have the same leverage available will find that the DW bikes don’t penalize them as much as other suspension might.

Now the DW personality that I’m so fond of has a lot to do with Ibis’ geometry as well. Balancing suspension performance and geometry behavior is a difficult task. Ibis produces bikes that are confident and balanced in their terrain sets.

I’ve found that Ibis bikes are well balanced when floating off hips, rocks, etc. I’m not much of a jumper, in fact even less since I’ve gone to flat pedals, but I do like floating off lips at speed if there’s a landing. The Ibis bikes are forgiving on the occasional “whoops I meant to bunny hop and I guess I’m just manualing through this!” moments.

Climbing I’ve found the DW platform quite comfortable. Of particular interest is the standing climbing. My VPP bikes tended to have wheel spin when I stood to climb. I’ve got a temperamental lower back and that wheel spin SUCKED when it grabs and your body “thumps” on itself. The DW suspension is efficient thanks to traction. It’s always working to move forward without loss of wheel contact, which is inefficient. The DW bikes don’t often spin wheels which makes my lower back that much happier on trail.

As a heavier rider I do add a volume spacer to my shock to provide a bit more support and pop. Nothing crazy, just one larger spacer than stock typically gets me dialed in. Or on the X2 you can run a bit more compression to increase the support as well. Which brings me to my only “hmmm” question on the DW suspension. I find it has a bit less “pop” when pumping the trail than say a Switch Infinity bike. That could be something that’s more notable for larger rides I think. I could probably tune more in with compression or volume spacing as well. What the DW gives up in “pop” it makes up for in “thump”. Like hmm, that rock section seemed way bigger until I ripped through it at full speed on my Ibis!

I’ve always been impressed with how well DW suspension and Ibis bikes translate motion. ie – they seldom wear bearings, meaning there isn’t much thrust load through them. This is another product of stiff designs with minimal lateral flex. Better tracking, longer lasting – good stuff.

Lockouts. I go back and forth using lockouts on Ibis bikes. For longer, trudge climbs I will use the trail mode. In more technical climbs I prefer the open suspension for improved traction.

Do you have questions? You should! Chat with our expert sales team about your riding style and which suspension best suits your needs.

Looking for ideas on your next build? Check out the Ibis Factory Builds, Frames and BikeCo Custom Frame Builders. At BikeCo.com we will ensure you get the best spec, setup tune and pricing in MTB.