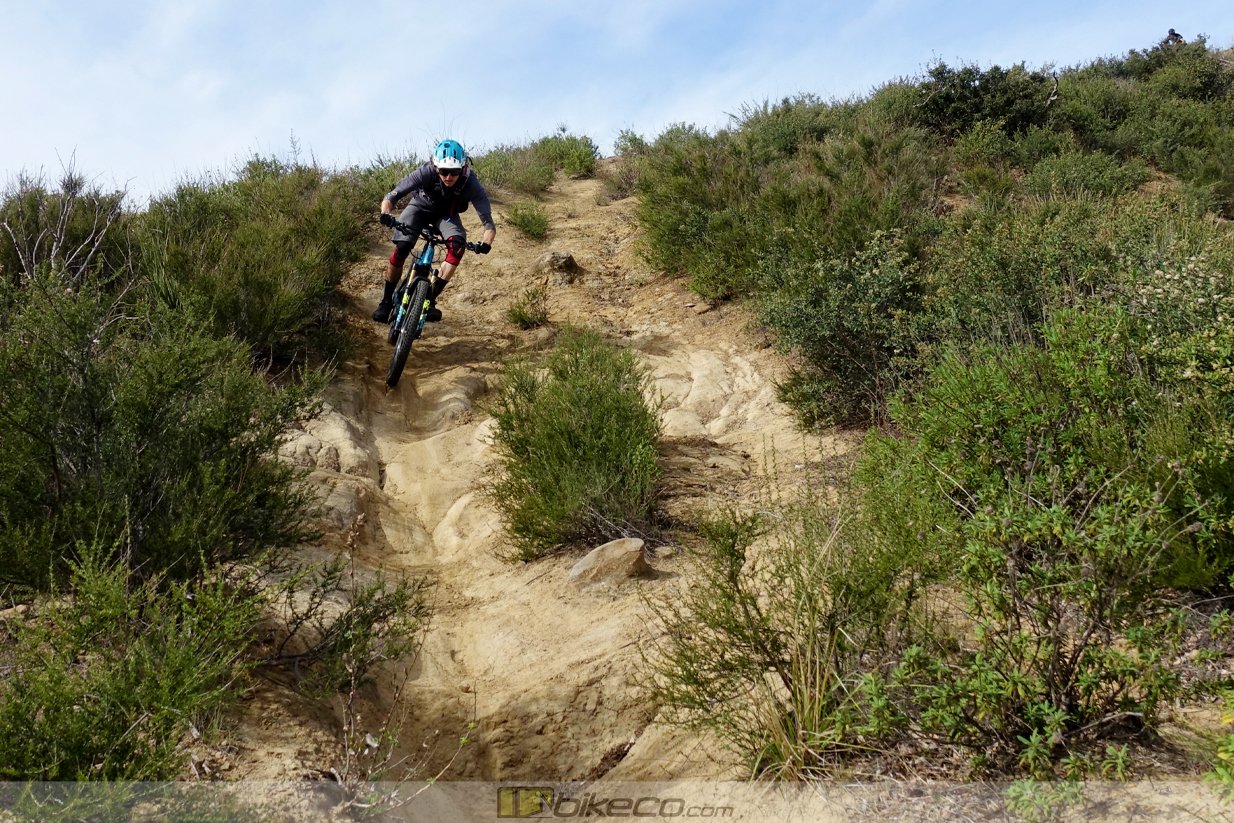 There are as many suspension theories, and patents for them, and pretty much all market to be the be all end all right? Of course. But just like pedal bikes we can quickly narrow down the real deal from the fakers.

You can quickly eliminate suspension designs that are intrinsically laterally hard on bearings. There are a lot of suspension designs that suffer from this in both pedal and eMTB. E-bikes have greater stresses due to the additional weight and torque potential. Suspensions with too much lateral flex are going to eat bearings, axles kits as well as just ride noisy and sloppy. Not what you want from your new purchase right? 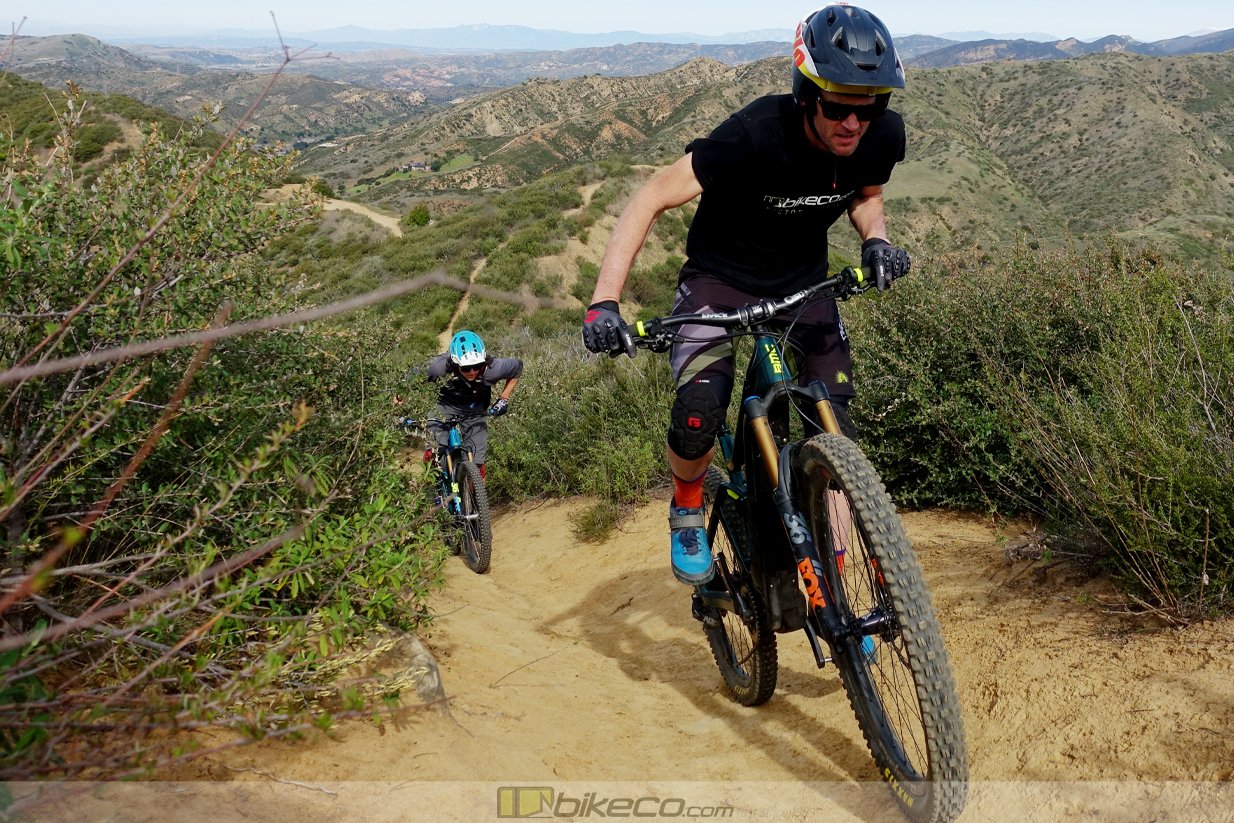 How does your suspension work climbing? Well, it should work well!
BikeCo owner Joe Binatena and Pro Rider Kevin Aiello attack a steep climb out of the saddle at speeds that activate the travel when the terrain dictates.

Bikes with drastically different suspension feel through the “meat” of travel won’t ride as confidently as bikes that maintain an efficient pedal platform deeper into the travel. E-bike riders will attack the trail differently than pedal setups. More torque opens up new lines when you climb. Faster speeds and more aggressive terrain mean you’re now more actively utilizing suspension uphill while under power. Taking the next step in that line – your suspension’s uphill performance matters much more now!

A suspension design that might “lock out” with chainline torque is going to bounce you off the trail on an eMTB. The best riding e-bikes are going to have suspension that is efficient through traction. This will provide excellent balance of efficiency as well as real suspension uphill.

When a bike’s suspension “locks” under power it tends to become bouncy and hard to control. On a pedal bike climbing in burly terrain you’re not likely to be going super fast and it might not be as big of an issue. Add the extra weight and speed (remember high school physics: velocity is mass times speed) of an e-bike and its’ even more difficult to control. This is particularly true when climbing in the saddle.

E-MTB Suspension Downhill is Important, Too 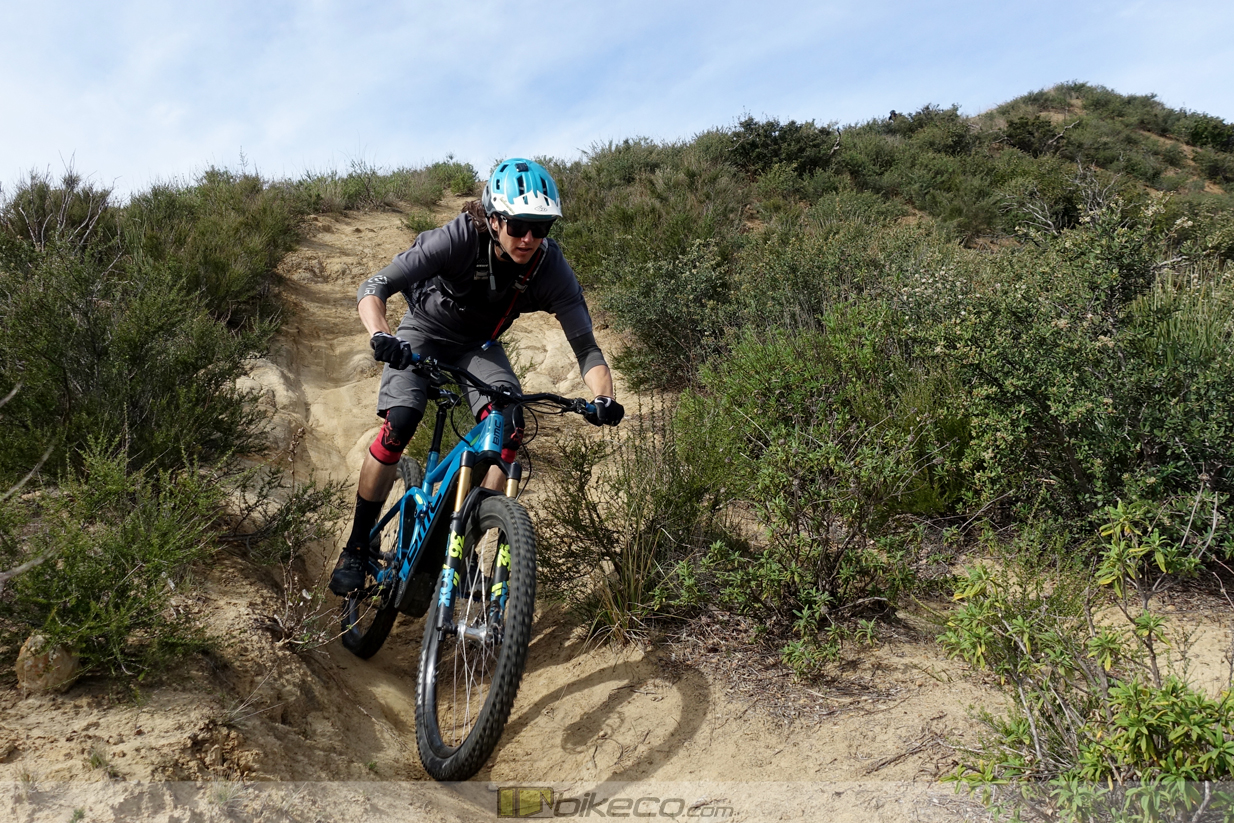 OK so now you’re looking at what types of suspensions are going to offer the best efficiency through traction with large pedal platforms. That’s good. Fact is you’re looking at e-bikes to extend your adventures and you’re still going to be spending time climbing. But now let’s look at the important downhill personality factors.

Again the additional mass of the motor and battery are important to consider.

Let’s say you’re riding a suspension design that doesn’t provide great simultaneous feel on front and rear wheel on pedal bike. The type of suspension where you’re forced to input A LOT of body english as you ride at speed. Well, having to control a bike with more mass, poorly balanced between the wheels isn’t going to be fun. In fact it’s going to be sketchy as hell.

The ideal setup allows you to comfortably and confidently control the bike from central in the cockpit. That’s going to give you the best feeling descending and cornering.

Our good friend Kevin Aiello runs SoCalSpeedClinics.com and has some really interesting things to say about cornering an e-bike.

“I have a lot of clients who get onto an e-bike and instantly notice how much better they can corner. There’s some really obvious factors that help that.

First, an e-bike’s extra weight gives it some additional stick, or grip to the ground. But also the battery and motor’s weight, at least with a good suspension design, is in the right spot. It helps compensate for riders who may still be struggling to keep their hips central, weight central and control the bike.”

Key here: ‘with a good suspension design’. Again, a bike that’s suspension is notchy or ill balanced isn’t going to have these benefits. In fact, its likely to create more on trail issues as riders work to control more mass driving through the dampers. 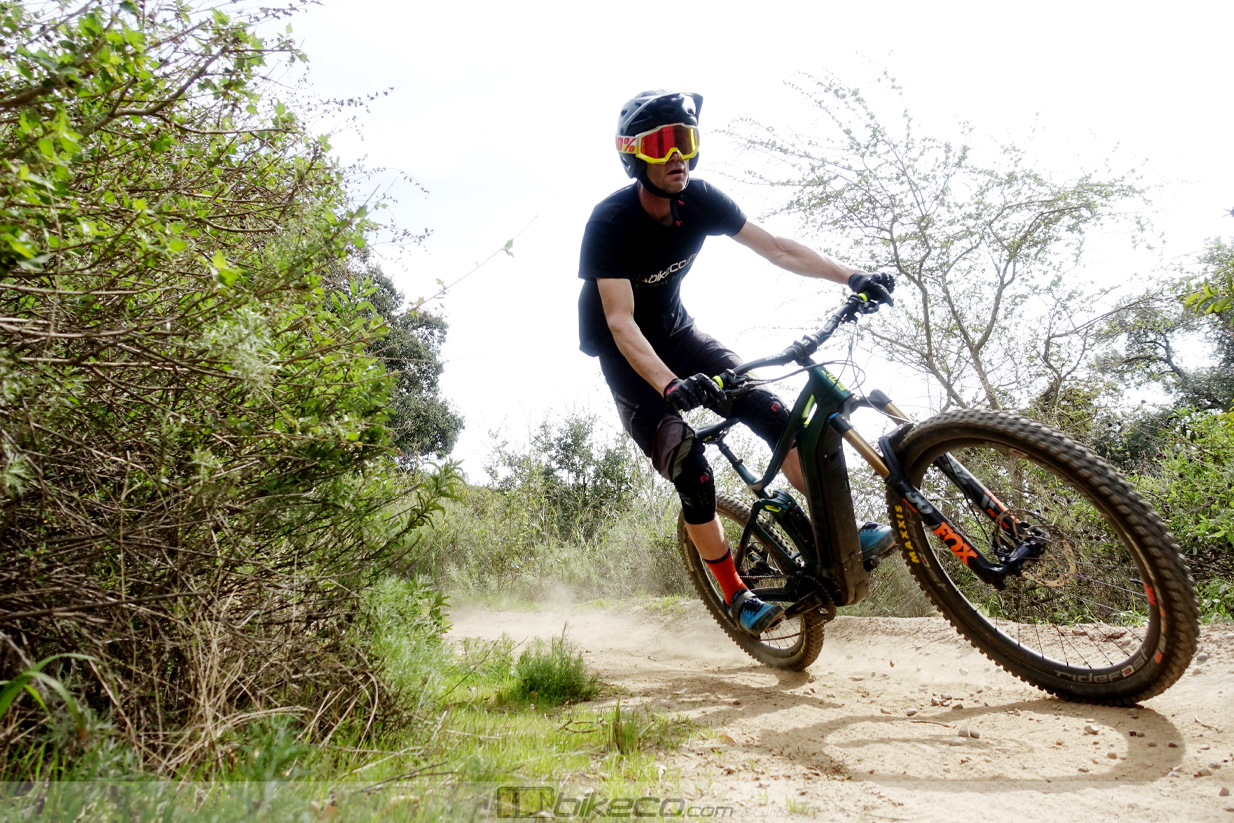 This BMC TrailFox AMP has been modded with a longer travel fork as well as 29″ front wheel making a mullet e-bike.
BMC’s modern geometry allows this type of personalization while maintaining excellent performance. Chat with our team for more details.

You’ve probably put together the photos all show BMC AMP bikes. You know why? Just like you, a shop has to buy into what they feel the very best product is in any budget. After a lot of research we are excited to bring clients the BMC AMP lineup.

The BMC lineup stands out for a handful of reasons. The biggest is the Advance Pivot System or APS suspension.

APS Suspension is confident and competent. It’s intuitive to ride. Frankly my first extended ride on an e-bike I noted a handful of differences to my pedal bike. Stopping distance, cornering mass, etc. But the BMC’s suspension did just what I thought it should on the descents.

With the extra mass low on the bike I had prepared myself for a bit more of a fight to stay with the bike. Nope. Really a comfortable jump to make.

Frankly there were three things I noticed riding the APS suspension on the BMC AMP SpeedFox.

First: I could pedal up far more ridiculous lines as I had access to the required torque without blowing myself out for the rest of the ride. This is where I really discovered how important the suspension is under power. Several large obstacles required the suspension to work without me having enough momentum to stop pedaling and lunge. It was really fun to actively pedal and lunge the bike up things I’ve seen but never thought of on my pedal bike.

Two: The suspension did its’ job in a few things I came in way faster than I intended at the beginning of the drop. Braking distance is a thing my friends… haha. A couple corners I came in hot enough to contemplate the “try and stick or bail” question. I looked for anything to plant against and pushed in. And the BMC did it’s thing.

Third: You should be better at dragging out the rear end than I am before you try to scrub over jumps on an eMTB… Can’t blame the bike that one’s all me… But my usual scrub line got way more adventurous as the motor mass tried to pass the front wheel when I got it headed that direction. I think Issac Newton had something to say about objects in motion or something.

Out of the saddle, using some different muscles than a pedal bike. eMTB isn’t necessarily a free ride up the hill but a different way to engage it.

In the market for a class leading, enduro capable, upgrade optional e-bike? Check out the factory BMC builds on BikeCo.com. Then chat with our expert team to help you understand what upgrades will take your new bike’s performance to the next level.

We look forward to seeing you on the trail! 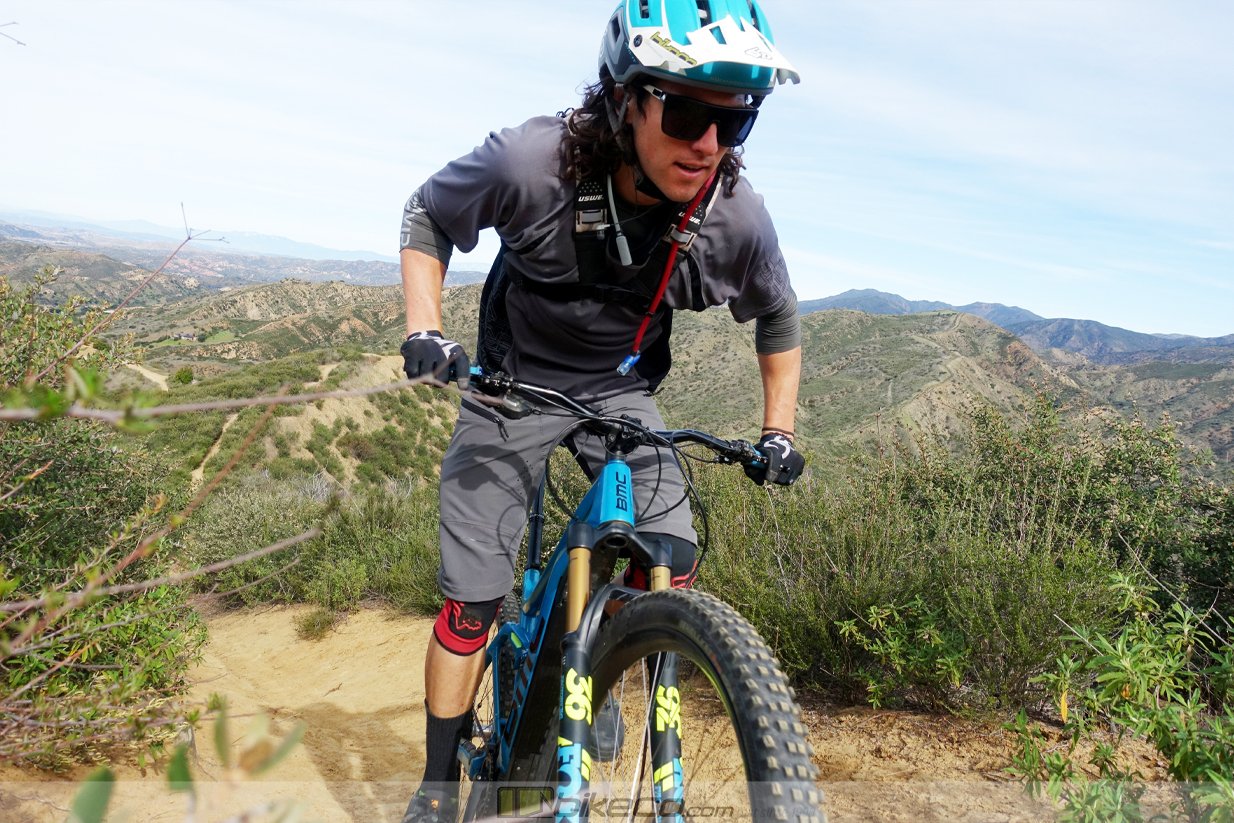