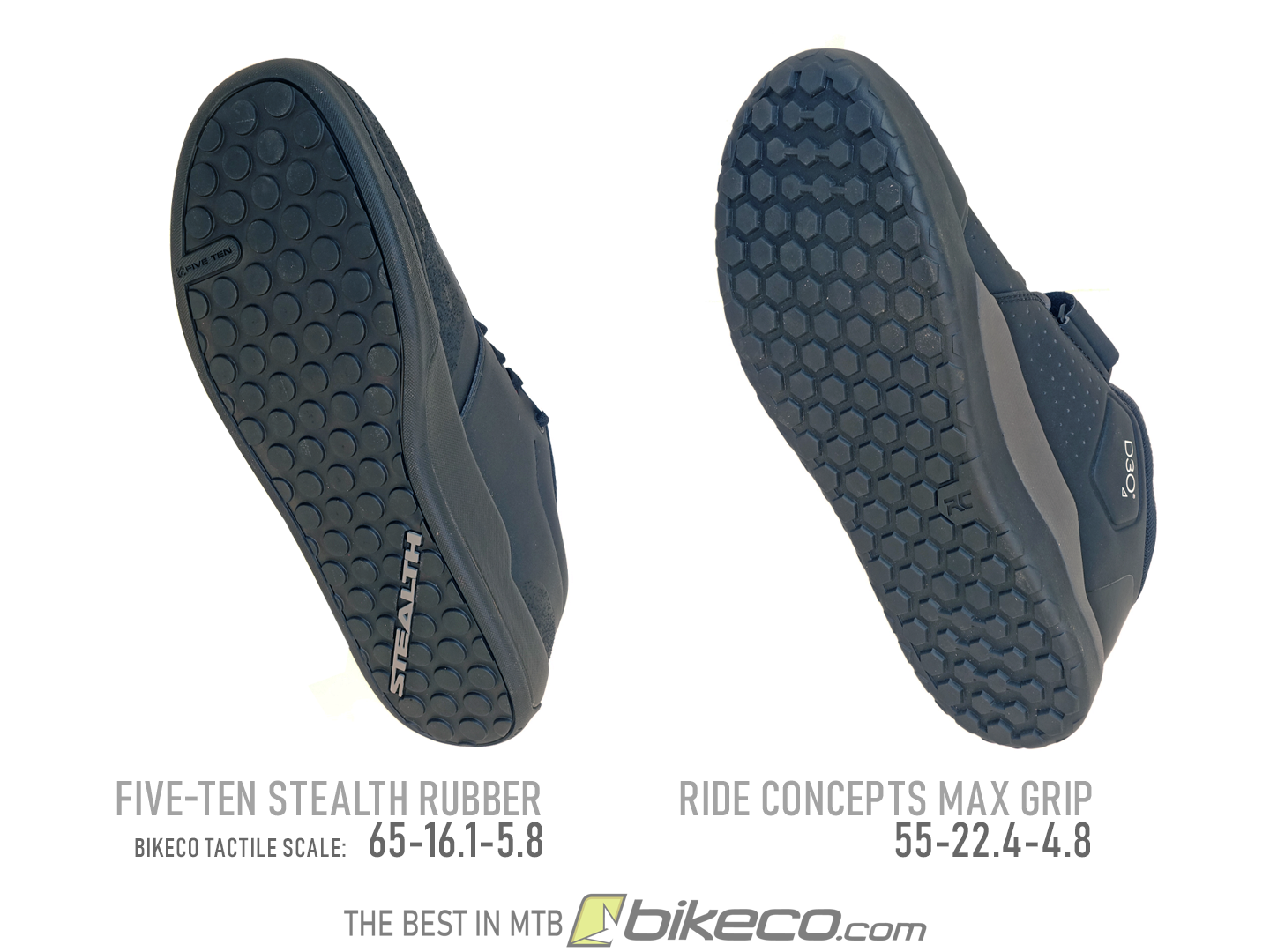 So what’s similar? They both work well. Confident and predictable grip is critical to enjoying your ride. Both of these shoes offer that.

Both the Stealth and Max Grip utilize lugs flat with the shoe’s edge and a gap left between pads.

The Five Ten use a circle while the Ride Concepts design features hexagons. Pretty close size between them as well.

At BikeCo we’ve been working to provide our online shoppers as close to an in-store experience as possible. To that end we’ve developed a series of tests that allow us to publish a scale to help with product comparison.

With experience on both of these platforms the Five Ten and Ride Concepts shoes were a big part in developing a system that provided numbers that passed the experience test.

Let’s look at the three numbers in the scale and how they apply to the Stealth and Max Grip soles.

Durometer is a basic “hardness” test – but if you really get researching it durometer is kind of vague on what it actual measures. In the world of MTB shoes it’s a decent barometer for wear as well as how easily pedal pins will “bite” into the shoe. When measuring durometer a series of readings are taken and averaged.

The Ride Concepts Max Grip sole on the TNT shoe measures a bit softer on the durometer scale coming in at 55.

Surface Tension, or Tack, or Grip, or Sticky…

So durometer doesn’t necessarily dictate how much “tack” there is on the sole of a shoe. A lot of variants go into that – but we wanted to have a repeatable test and developed this weighted drag reference.

Dragging this sled across the sole, averaging the results and taking into account the contact patch size we define a value (watch the video if you want to learn more about what we’re up to!)

The Five Ten stealth rubber tested to 16.1 on the sled test.

As a reference, a standard pair of Puma casual shoes I had in my office tested to 5 and the Five Ten gum sole tested to 10.8…

The Ride Concepts shoe came in with the highest surface tension of anything I’ve tested so far at 22.4.

This result compared to the Stealth rubber makes sense to the “finger test” when you have the shoes in your hand – which really was the goal of putting these metrics together. We want to have some tangible comparison for clients reviewing product here at BikeCo.com.

Finally we looked at the sole’s ability to damp impact.

This is probably the most exciting test, with a drop rig, steel balls, electromagnets… And comparing shoes it’s probably pretty close overall since the shoes all went onto the same jig in about the same way.

We take an average of 3 to 5 drops, disregarding any way off the average since they might have hit funny or whatever. We divide the drop height by the average rebound distance (and move the decimal point) so that the higher the number the more damping it has (or the smaller rebound measurement on the bounce).

The Five Ten Stealth came in with the most damping of anything we’d tested so far, a 5.8.

The Ride Concepts also had good damping at 4.8.

Improved damping helps neutralize trail vibration back into the rider. As a reference the gum sole Five-Ten had much more rebound with a score of 3.2.

Riding the shoes I believe that the Ride Concepts insole actually provides a lot of additional damping as well, and I’m not sure how much of that is factored into this particular test.

The TNT is a slightly more “robust” or aggressive shoe and the insole feels slightly taller than the Freerider.

So, our final numbers came out as follows:

The Ride Concepts Max Grip sole on the TNT model came out slightly softer and tackier.

My experience with the shoes, which I have to admit end up as both riding and work shoes – both at the shop and chores around the house, parallels what we’d expect to see from numbers like we calculated.

Both shoes are MUCH more tacky than others giving you great pedal feel and grip. Pedal pin penetration (how’s that for alliteration) is confident in both while you can still move your foot when you want.

It’s interesting that the Five Ten’s sole has more damping properties and that in general Ride Concepts uses a thicker, more aggressive in-sole. I imagine that’s how they end up with a similar trail feel between the two shoes.

If you’re using them solely (more shoe puns right?) as riding shoes both offer good wear intervals. Doing a bunch of walking and working in them? You’re going to notice the Ride Concepts will wear faster than the Five Ten. Both have good grip when hiking even in wet conditions (albeit I don’t get to test much in the wet here in SoCal…)

I would recommend either of these options – since we only offer the best in MTB it’s easy to get it right shopping at BikeCo.com. Other shoes may have one of these factors similar to the class leaders, but getting them all balanced and right is harder than it looks. The slight differences are really notable on trail.

For instance, the Five Ten gum soles I tested (my daily shoes since they’re non-marking) tested at 72-10.8-3.2. And those shoes are horrible to ride in frankly. Part of it is the model (which we don’t stock) is too soft and part of it is the sole is too slick.

Well we have you covered. Check out this quick video with more examples of how these tests will bring a better understanding to riders about the performance of grips, tires and shoes.

BTW, looking at Five Ten or Ride Concepts models that will be right for your riding? Shop them here!

Over the years we’ve worked to provide online shoppers as close to an in-store experience as possible. One thing we felt could be expanded on was a scale to better define the feel, particularly of items like Tires, Shoes and Grips.

BikeCo.com wants shoppers to be able to have more than “it’s stickier, because that’s what they say” when picking #thebestinMTB

This video is a quick explanation of the system that you will see being applied across our site over the next few weeks and to new product offerings.

In short, we’re measuring the durometer (or surface “hardness”), the surface tension with a weighted drag test, and the damping with a drop test measuring rebound percentage. Our system will allow you to more easily compare apples to apples across a range of product manufacturers.

Shop the best in MTB at BikeCo.com including Ibis, Mondraker and Yeti factory completes, customs, semi-customs and more!