Lot of questions on the new Mullet concept. Yeti has come out with the geometry for the SB140 as well as SB165 mullet conversions (check out our interactive geo comparison here) but I got a lot of inquires on the SB130 concept. So let’s look at the SB130 Mullet Geometry.

My first instinct, having owned and SB130 since the launch, is that the BB dimension would be too low for most riding conditions. But I’m all for a quick look to see how right I am. OK, or, well, kinda right.

I built out a model of the Medium SB130. When you “mullet” a bike the geo changes are more distinct on the smaller bikes due to the proportion of height change in wheel to total wheelbase. So a large would actually have slightly less dimensional shift than this example but you get the idea.

In the first image let’s look at the standard SB130.

Now, I didn’t build out a total CAD model – but our illustrations have been well within 1% when we audit – so I’m confident the numbers will be close. 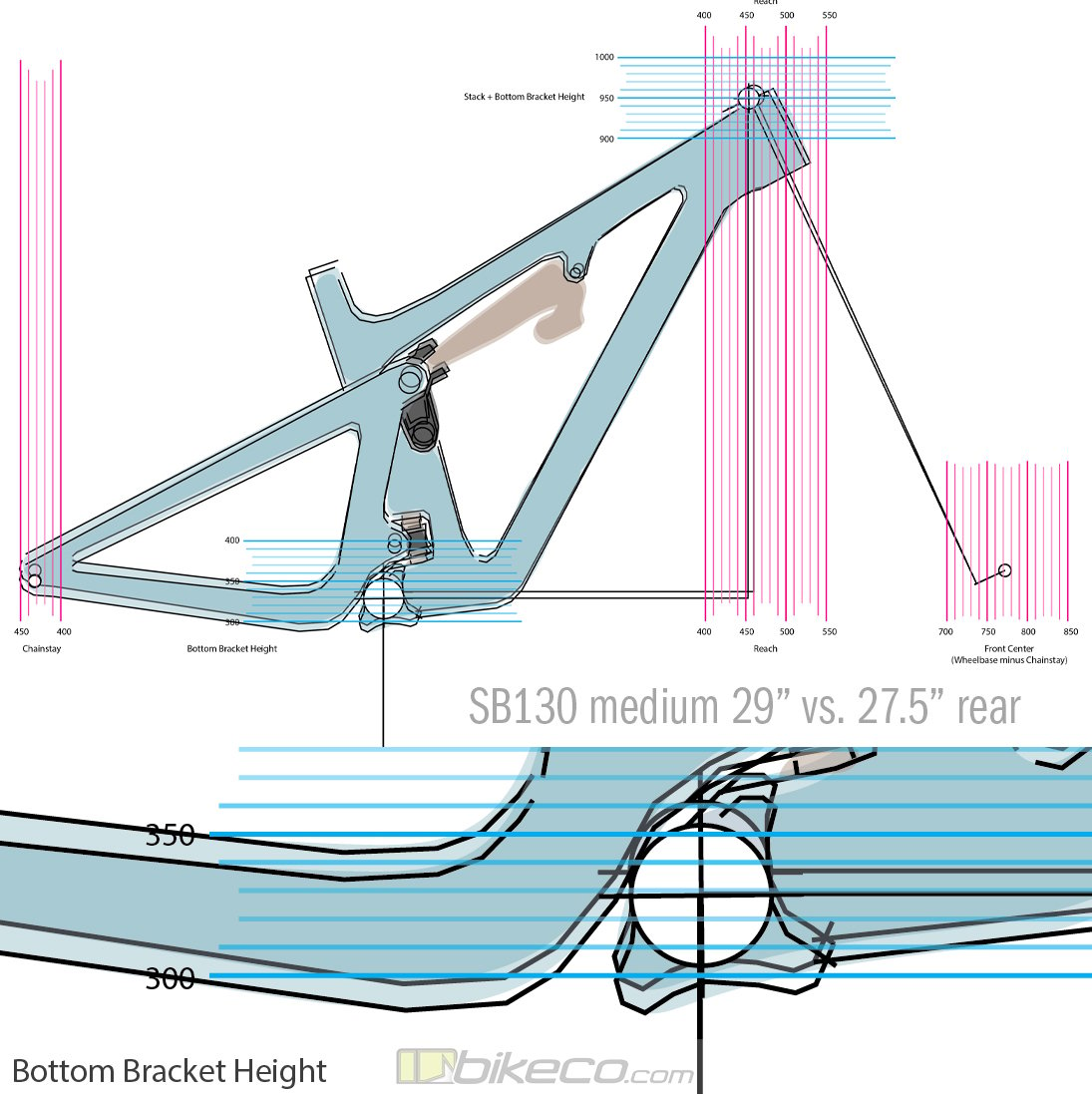 Also the headtube slackens notably. From the stock 65.5 our model shifted to about 64.9. This is actually slightly more slack than the SB130 LR configuration.

Concepts are all the same here. 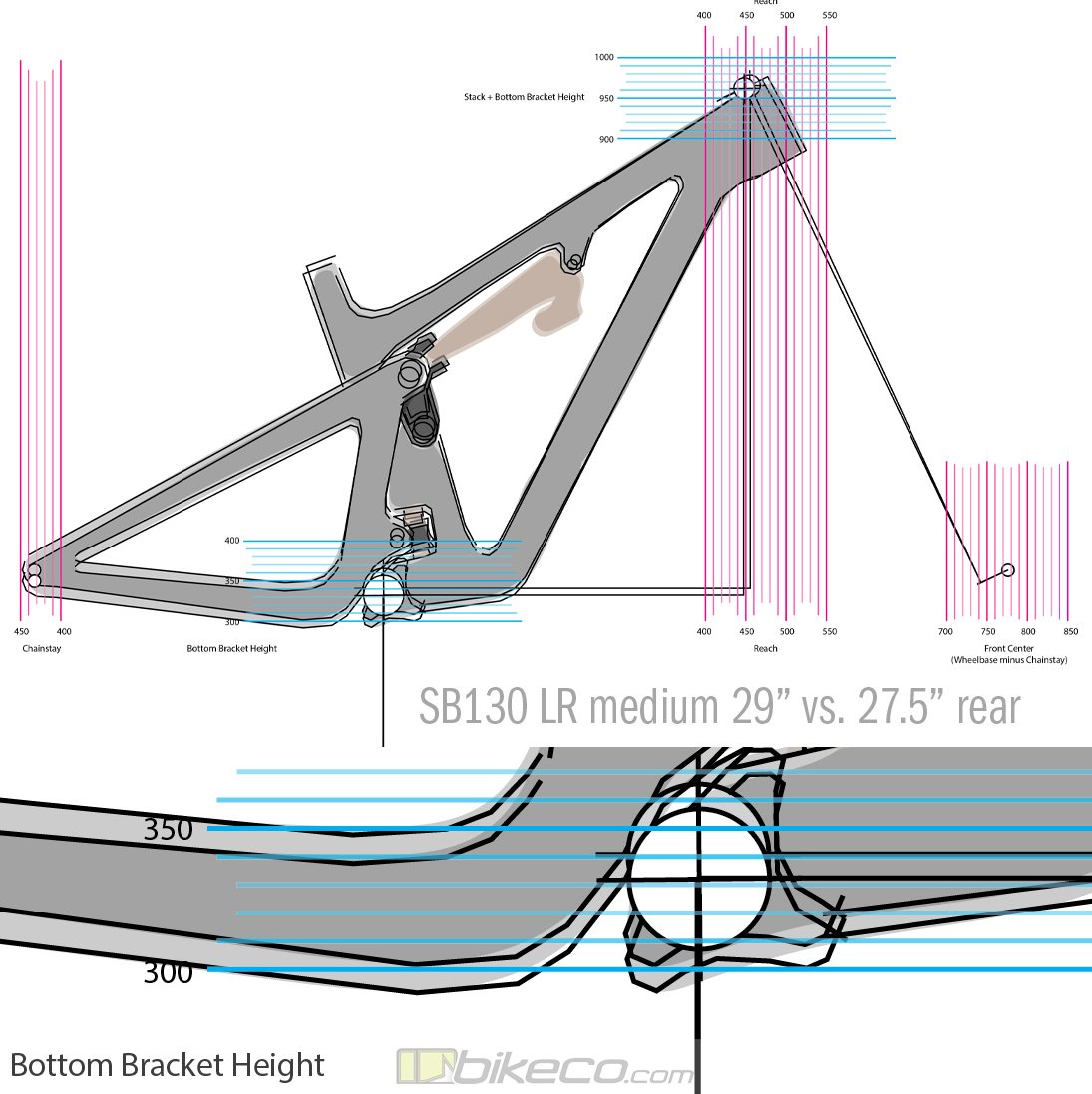 The bottom bracket shifts from the LR 340.8mm down to 332.2mm. About 8.6mm. This is less than the standard SB130 as the Lunch Ride’s longer fork increases the wheel base. The longer wheel base modifies the proportion on the rear wheel’s height loss, if only slightly.

I’ve run the Lunch Ride configuration on the SB130 for quite some time. The slightly taller bottom bracket than stock has been enjoyable to me. With a slightly slacker headtube the Lunch Ride setup isn’t quite as nimble but is confident in steeper or faster terrain. I wonder how much the climb would be modified nearly doubling the headtube angle change? Headed into the 64.5 range puts the Mullet into the SB150 headtube angle but with 10mm less travel in the front end.

As you rotate the geometry down, pivoting from the front wheel axle, you also decrease the reach and stack – but really only slightly.

Well looking at the numbers does have me a bit interested. Do I think the SB130 mullet is the bike for me? Nah, not really for all the reason’s Joe so kindly described in the Alchemy Nine7Five chat we had. But since I own a SB130 Lunch Ride and have access to 27.5″ rear wheels I might go at least try it out – it has me kind of interested. 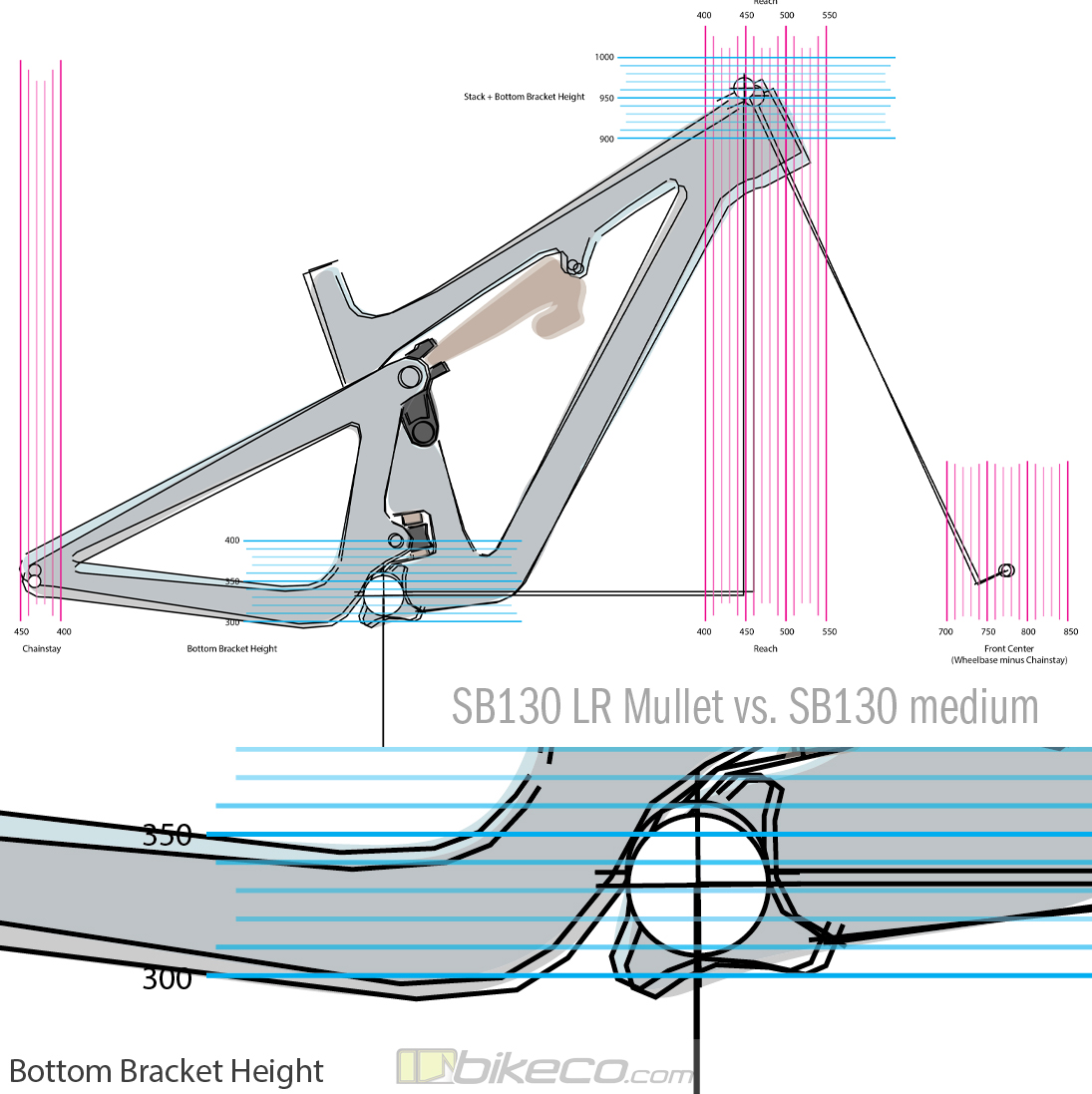 Again we’re looking at the medium SB130. If we use the Lunch Ride 160mm fork geo to bump up the bottom bracket, then drop it with the 27.5″ rear wheel what do we end up with comparison wise? Funny you should ask.

Bottom bracket height goes from 337.7 to around 332.2mm or a 5.5mm drop. That’s pretty low overall – but I’ve written before that I’m not sure I’m precise enough to pick up on 5mm, or 3 quarters stacked up, so maybe my bottom bracket concern isn’t as much as I think.

What I wonder about more looking at the numbers, is how the bike will behave climbing or jumping back on the power with the equivalent to an SB150 headtube angle but without the additional travel front and rear. I don’t ride steep into steep enough to justify losing much front end balance on my personal bike.

I’d also be interested in seeing how much the bottom bracket height is modified at sag. My instinct is that running the same sag percentage would result in a more pronounced bottom bracket drop. I could be wrong about that. If I decide to test this on my rig I’ll make sure to get some numbers on it.

If I had to pick a safe bet on the SB130 Mullet concept – it’s not the same bike as the stock SB130. Would it be fun? In some scenarios I think it might. Enough that I think I will find a rear wheel around the shop to test it.

Is it perfecting an already brilliant bike? Probably not for a majority of riders – but if it does for you right on. In the market? Chat with our team to help define what your riding style and aspects of your physical build that would steer you one way or another…

Steering. That’s probably now my biggest concern looking at the geo on an SB130 Mullet…

**modifying a bike from stock may effect manufacturer warranties.**