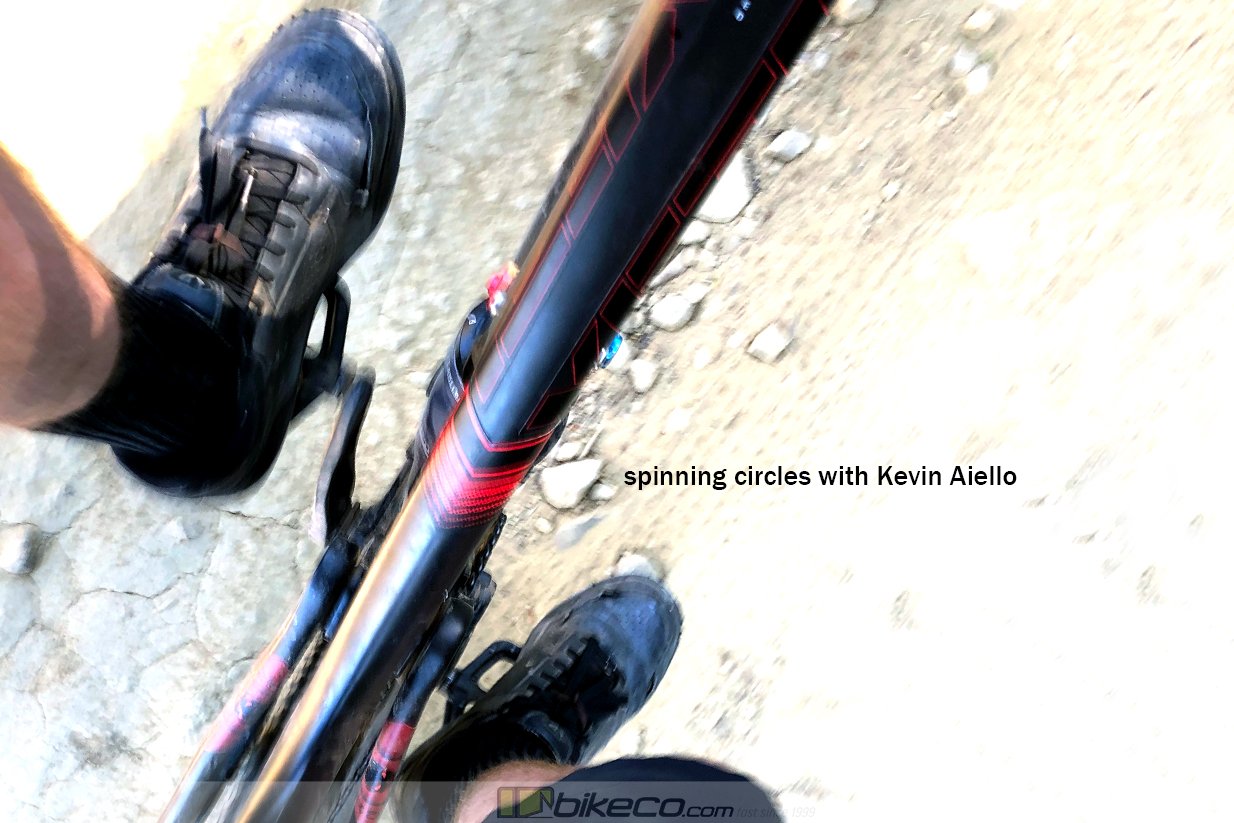 Like a lot of jobs mine has perks. Lately one of those has been spending a lot of time in the shop and on the trail with Kevin Aiello from SoCalSpeedClinics.com. As I’ve mentioned Kevin blows me away with his MTB coaching aptitude. He sees something, gives you something to think about and you’re riding better. Kevin’s known for his DH and Free Ride skills. You know if you ask questions about cornering, steeps, chunk, jumping, etc he’s got you covered. So I tried to throw him for a loop with something less, ah, enduro I suppose. Help me pedal more efficiently.

We were chatting about my continual flats versus clipless inner dialogue. (which is coming as a write up soon) I mentioned I never felt really efficient on clipless (which was oft confirmed by my brother and Joe making fun of it) so maybe flats weren’t hurting me uphill. Kevin challenged my thinking on it.

BTW – the post image illustrates fairly accurately why I ride flats. I wiggle my feet all over the place. Particularly on the uphill. Forward. Back. In. Out. Right foot more duck foot. I dunno. But I do find flat pedals have taken a lot off stress of my lower back pedaling… You can check out more about how flat pedals helped my back on this blog.

Kevin asked, “You mean pulling up? So you don’t pedal clean circles then?”

Ah, ya. So I’m told by many faster riders than me…

“Well if you’re not pedaling clean it’s hurting you on flats almost as much. Sure you’re not attached to the pedal for the up-pull – but if you’re only mashing as the pedal swings over you’re missing it.”

Great. So now I suck climbing in both setups?

“I’m gonna prove it to you today. Every little bit helps right? So if there’s a more efficient way and you can train your body to just do it right all the time why wouldn’t you want that gain? It’s like cornering or riding chunk – you just have to work on it until its’ second nature.”

This conversation was getting ready for a pre-work loop at The Luge, a local trail with a bunch more climbing than descending frankly. And a road climb. That I hate. Anyhow.

“Go with a high tire pressure for the road climb today. That will help make my point more clearly. Pedaling clean circles is going to make you more efficient and you can feel it. The road climb is somewhere you’re gonna notice it 100%. Then think about how much you’re giving up on the rest of the ride. Sure it might be only a bit but it’s a bit for an hour or more. And its costing you efficiency making you work harder while being slower? That sounds lame right?”

It did sound lame. And I figured it was worth a try to see. I put in a few extra PSI for the road climb and headed off.

Sidenote: the steep part of the road climb is at least that point you’re off the main highway. So that’s a bonus I guess. I don’t know how road riders deal with that all the time. MTB or Gravel for me thank you.

We kicked into the climb and Kevin’s calling out when he sees me hitting the power.

OK OK OK. I started concentrating on pedaling over-sized circles. I’ve heard the concept before over and over. Lopes wrote about it in his book (still one of my favorite resources too). My brother has explained it a million times. Joe just laughs at me. Kevin’s in a long line of fast riders who seem to care more about be being efficient than I have.

Except riding up the road concentrating on spinning oversize circles I did feel much more efficient. Instantly. Not like going to catch Joe up the climb faster, but more efficient, like I was expending much less energy to do my thing. I’m not sure if its relieving stress by not loading / unloading so hard instead staying somewhat more of a constant exertion? Maybe that’s better? I am far from a fitness person – anyone with a guess here is as good or better than mine hahaha…

Alright. So what other pedaling tricks you got Kevin?

“Do you know what cadence feels best? Like where you feel most efficient without burning tons of energy without the ground speed?”

Ah, hm. If my legs are moving I’m usually happy but I know what he means. Understanding the cadence or pace that allows you to stay on the power without blowing yourself up is a powerful tool. For some reason I tend to forget to shift and find myself spinning my legs faster or powering in a harder gear. It’s notably less efficient.

“So when you find it gets easier and you feel that ‘thump’ between your feet and cranks because the pressure’s not there you need to shift to a harder gear. A lot of the time it’s more efficient than trying to spin your legs faster. Your legs are heavy man. They have a pace they want to go. You’ve got 12 gears to make that happen.”

Pushing “harder” to stay in a gear is pretty obviously more difficult. But I hadn’t put a ton of thought into it being less efficient to stay in an “easier” gear. On our ride I worked to keep at a more optimum cadence and frankly watched Kevin and BikeCo’s Joe Binatena to see what their personal programs were. Both seemed to keep their legs moving at a pace and shifted gears significantly more often than I usually do.

We chatted about the levels of output during pedaling. To over simply a bit – exertion, rest and recovery. Other people may have other names for this but these made the most sense to me. Exertion is pretty obvious. So is rest. But paying attention to cadence provided a much wider range of “recovery” pedaling between exertion. This allowed me to more aggressively attack the climbs riding faster up a variety of sections. Riding faster gave me a more confident feeling utilizing momentum to challenge the terrain versus bouncing off everything and being redirected a million times.

So now the trick is to make these second nature. Frankly it’s not quite as amazing as having a quick counter steer become second nature (I almost had a cartoon level high side into the mountain later on the ride – second nature reactions are important hahaha) generating improved habits on the climb will make riding your bike more fun. Need some pointers? Contact Kevin Aiello with SoCalSpeedClinics.com today.