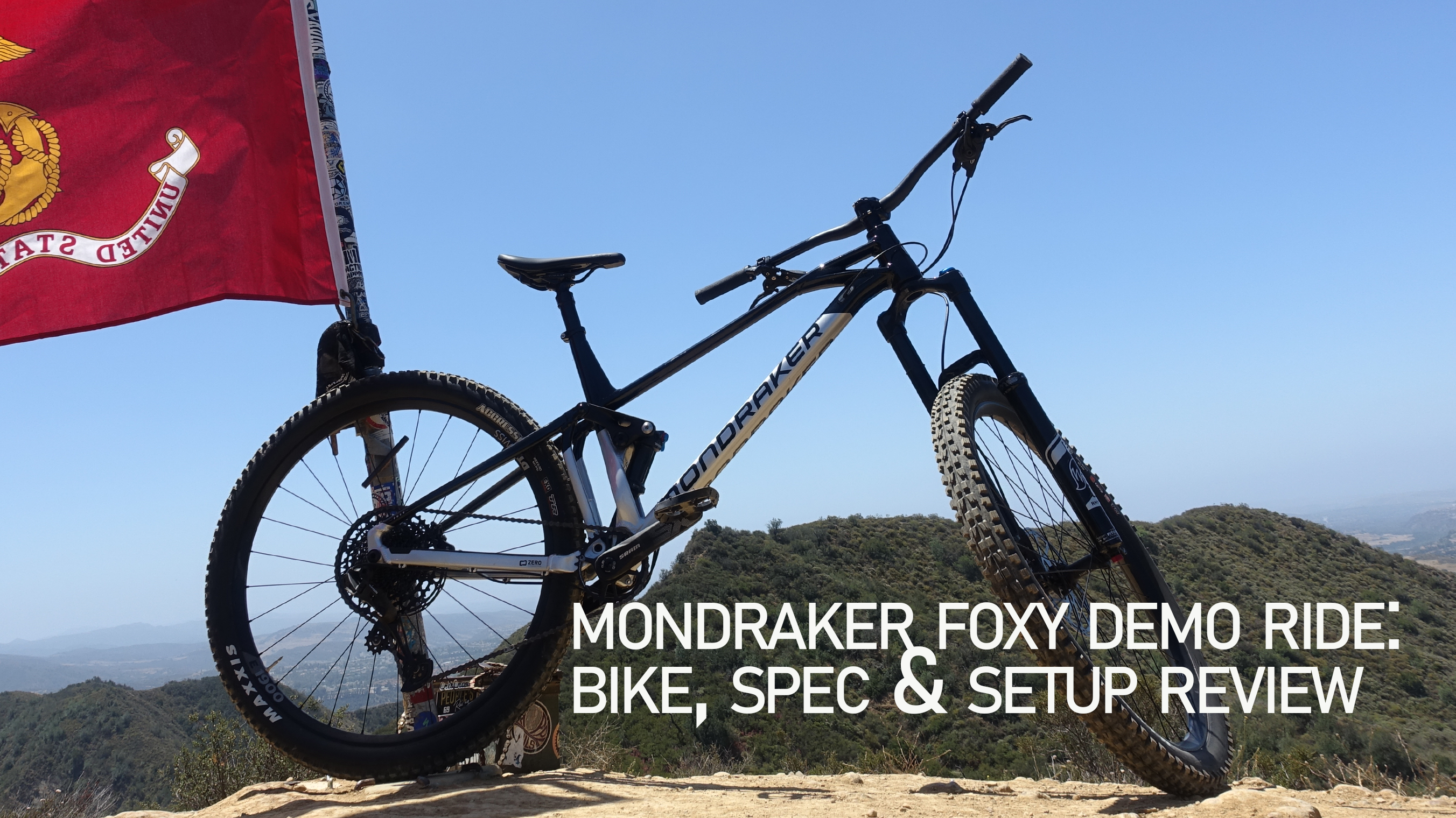 I hope you enjoy the video with both my real time thoughts on the 2022 Mondrakers as well as some concepts to review on demoing not only the Mondraker but really any MTB. (Click to see part 1, “What to Look for in a MTB Demo” video)

With the modern economy demo fleets aren’t necessarily full of each size and each model you’re looking for. So, its more important than ever to be able to work and define whether you’re noting the Frame / Suspension Design, the Spec (Components) or the Setup. All three are critical in dialing in YOUR dream bike, however, the reality on a quickly setup demo you’re going to have some accommodations to be aware of.

This Mondraker FOXY was a very poignant illustration of that. With all of the carbon bikes allocated to dealers (like BikeCo.com!) the demo fleet is made up of more entry level aluminum bikes.

This made it more important than ever to be able to understand what performance attributes would be due to Zero Suspension Design and Forward Geometry, which are shared with the FOXY Carbon R while being able to decipher what influence the aluminum construction and more cost-conscious spec had on my demo ride.

So what did I find?

My Mondraker FOXY First Ride made one thing really clear: Zero Suspension is notably compliant and competent. The Mondraker FOXY rides well planted and is confident in fast direction changes. The Mondraker suspension also is exceptional putting power to the rear tire. The planted feel minimizes rear wheel slip under power even in less than idea climbing conditions.

How was I able to determine this? Just beyond amazing demo? Ya, not exactly…

Well, it might seem somewhat counter intuitive to be really impressed with a design when the ride experience was kind of just above so/so right? Not when you can break apart the bike design, spec and setup.

The FOXY demo had FOX Performance DPS rear shock and FOX Performance GRIP 36 fork. Both of these are quality bits, but neither has the external compression controls of the FOX Factory or Ohlin’s products to help provide more rider support quickly. Also, demo bikes are done to accommodate the widest range of riders. Well, many riders, especially lighter ones or riders with slower ground speeds, prefer less ramp rate so the suspension tends to have fewer volume spacers than you may run.

In short, I knew the suspension dampers were going to be somewhat overwhelmed – I tried to make up for some of this with a bit more aggressive air pressure but the mid-stroke of both fork and rear shock were going to be slightly lacking. Now, if the bike was mine could I get that dialed in over a few rides? Ya, with volume spacers and PSI variants you could get it close. With Pro Tune suspension you could get it even closer with size and speed based tuning in the circuit. But back to the FOXY.

The Mondraker Zero Suspension was exceptionally confident even with dampers that I knew were being overworked. How did this manifest on trail? Well, the bike didn’t squat into corners. In fact, even with a relatively soft mid-stroke in the rear shock the bike felt like it stood tall heading into turns.

Now, a little bit of that would be because the fork was being overwhelmed and allowing the weight to shift forward, but not all of it.

The FOXY was sure-footed and competent even with my body weight being tossed around a bit to make up for the lack of front end support. Impressively the bike was quick to change directions in both high speed “S’s” as well as medium or lower speed bermed switchbacks.

The demo bike was setup at 160mm with a 66 degree headtube angle. Personally I would be setting it p with a 170mm fork, not so much for the additional travel but to slacken the headtube, increase the trail measurement and raise the front end up just a bit.

This combined with a personalized cockpit (the demo bike even with full spacers underneath the stem was still a bit low for me) would have dialed in the front end and allowed the rear end to perform even better.

The Forward Geometry is what we expect in modern MTB geo. The Large Mondraker fit very similar to my current Large Yeti SB130LR.

Climbing you’re placed in a comfortable, powerful position allowing you to attack technical ascents. In fact, for a 150mm rear bike I was blown away with how well it climbed. The energy you invest pedaling can be felt in the acceleration.

Descending riders find a confident position able to control the front and rear wheel in a position without extreme body English movements.

I often tell riders to try to avoid coming back from a demo with a “I loved it” or “I didn’t love it” attitude.

Its tough to have all the bits line up to totally fall in love with a bike on a short demo. It’s not too hard to decide you’re not into the right bike if you don’t break apart what was based on bike design, bike category, spec or setup.

Being able to work with a resource to help define this will go a long way to understanding if you’re on the right bike with the wrong bits, or if you’re in the wrong category of bike (honestly the FOXY is probably a little bigger than I would ride – I’d probably lean into a slightly burly built RAZE – or maybe a faster spec’d FOXY… hmmm now I’ll have to go back and look again!)

Suspension had very consistent, confident, planted feel yet with power the bike was incredibly efficient. Felt like it was shorter rear travel than it is while climbing, found traction even in challenging conditions. Felt appropriate acceleration for increases in energy output.

Bike stayed behaved even when pushed past fork’s ramp or compression – that’s to say when I got in some “oh boy” moments and undoubtably was throwing my body around the bike didn’t spit me out but stayed competent and neutral.

Bike had good support in rear into corners, which must have been mechanical design as the shock was under ramped and didn’t have finite low speed compression controls.

Geometry felt right for pedaling. Felt like I expected that size bike to feel. Didn’t feel a way off from my Yeti’s fit. (check dimensions)

Wheel and tire spec was as expected on a bike of this category. Not my ideal but worked fine.

3 Things I Would Change

Brakes. Magura or Hope for improved modulation and confident power. I’ve run both over the years with excellent results.

Suspension. Performance Suspension on the demo Foxy lacked the compression controls for fine tuning the feel. Combined with a much more linear feel due to fewer volume spacers than I would run had the bike diving more than I would have liked to see, but it 100% felt like it could be tuned out with volume spacers in Performance Suspension and volume spacers and compression settings in Ohlins of FOX Factory Suspension. I would likely end up with the Ohlins’ spec’d on the FOXY Carbon R for this bike, or a Factory Float X and Factory 36 if I went with a Raze.

Cockpit: Hands were a bit low on test bike (bars sat taller than Yeti next to it, but BB difference probably made back up for that). Getting your hands in the right place is important for finite bike feel.

In the market for #thebestinMTB? Work with the experts at BikeCo.com to get dialed in on the best bikes, with the best suspension designs, spec for your budget and setup to your needs.

See you on the trails! Nate at BikeCo.com

Learned something about the 2022 Mondraker FOXY from this demo write up? Well see how I put together my personal FOXY Carbon after riding the aluminum demo…