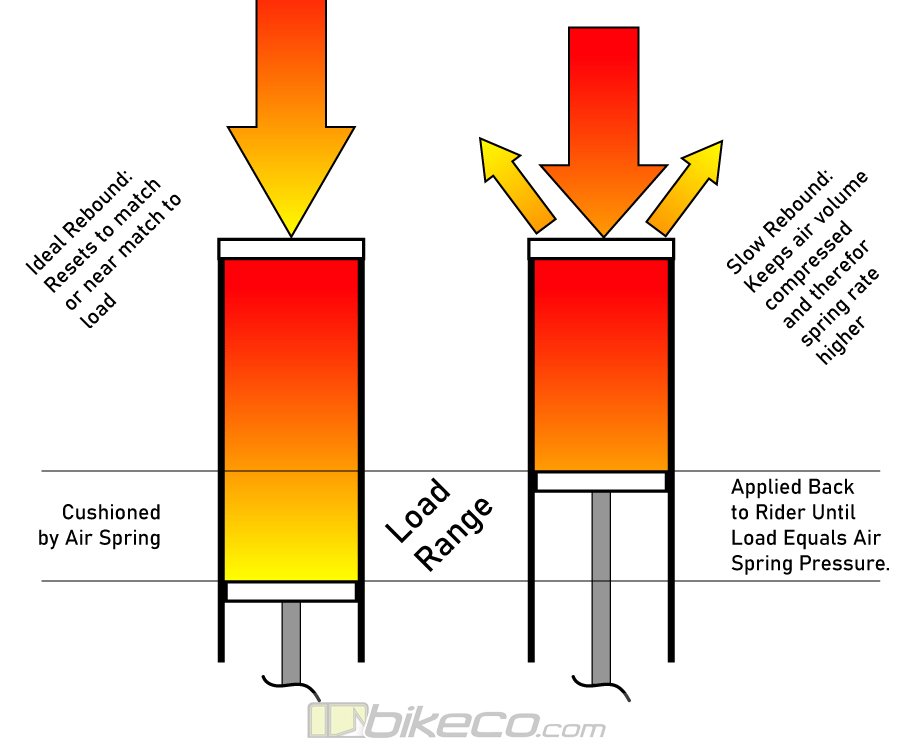 Air Pressure, Volume Spacing, Rebound and Compression work in concert to fine tune you bike’s performance.  Watch the video and read through the blog to be a step closer to understanding MTB Suspension Controls!

Click through the tabs below to learn more about the specifics of Air Spring Pressure, Volume Spacing, Compression and Rebound tuning.

MTB suspension must accommodate a wide range of rider weight. To achieve this nearly all forks and rear shocks use an adjustable air spring.

By varying air pressure riders set a desired sag, or percentage of travel that the bike “sits into” under neutral loading.

Modifying this sag percentage will change small bump compliance as well as bottom out characteristics.

Learning how to Pre-Charge your suspension pump will help you make finite adjustments to sag.

Typically 15% sag is for a firm setup and 20% sag is considered plush.

Fine Tuning Control: Volume Spacing.
Air springs ramp rate, sometimes called Spring Rate, is based on how air compresses in the containment cylinder. As the air is compressed the PSI increases according to the decreasing volume of the containment. This is done via non-compressible volume spacers in the air chamber.

Opposing Control: Rebound.
Higher spring rate will drive the suspension back to neutral with more force than a lower spring rate. To keep the bike from skipping across trail rebound damping is utilized.

As suspension compresses (travel reduces) a piston moves closer to the end of a sealed container. By decreasing the volume of the container the PSI pushing back on the piston is increased.

By adding or removing non-compressible volume spacers riders modify the air spring’s ramp rate which directly changes the amount of support and bottom out feel of the fork or shock.

By removing volume spacers a rider increases the available volume in the suspension. The larger volume compresses less per mm of travel resulting in a lower PSI per mm of travel. This creates less support and is utilizes more travel.

Opposing Control: Rebound.
Rebound may need to be adjusted for volume tuning depending on how drastic of a PSI change is being tuned in or out of the suspension.

Compression controls provide damping to slow suspension travel as a load is applied and the suspension is compressed. (easy one right?)

When riders have found sag and volume spacing preferences compression controls provide minute adjustments to dial in performance. Adding compression provides more support allowing the suspension to ride taller in its travel which is important when dialing in a bike’s personality in corners, etc.

With too little compression a bike will sit deep in the travel. This compromises cornering and braking force resistance. Headtube angle, bottom bracket height, front to rear weight bias, etc are modified as a bike goes through its travel. Maintaining control of the use of travel is paramount for good performance.

Too much compression will cause a bike to feel harsh and not use appropriate amounts of travel.

Generally, compression settings are fine tuned after sag and volume spacing have riders “in the ballpark.”

Low speed compression controls mid-stroke as well as support in cornering and against brake dive.

3 positions switches are a type of compression circuit with Open the most plush, Mid providing some additional support and Firm for climbing. If you climb in firm remember to put it back to plush for the downhill or you’re in for a potentially rough ride.

Rebound damping controls a suspension’s shaft speed returning to a neutral position. Or, how fast the air spring pushes back as the load changes.

More rebound damping slows the suspension by decreasing the amount of fluid allowed to pass through the hydraulic design.

Less rebound damping allows the suspension to return faster with less hydraulic restriction on the damper.

Rebound setting is based on weight, ground speed, terrain and aggression. Setting the rebound properly means finding the right frequency or feel for your riding.

If your rebound is too fast, or doesn’t have enough clicks of rebound, the bike will tend to skip and suffer poor small bump compliance.

When the rebound is too slow, or you have too many clicks of rebound, the suspension may “pack up” creating a harsh ride as each bump uses progressively more travel forcing the suspension deeper into the travel, which will have higher spring rates.

While illustrating what started as a real basic, kind of introduction to understanding mtb suspension controls there were some visualizations of “oh, I knew what that felt like, but when I ‘see’ it it makes even more sense”.

Getting a proper suspension setup involves balancing the available adjustments into windows where each characteristic functions. Quality suspension manufacturers tend to have their adjustments in a ballpark for about 140lb to close to 275lb riders.

What this means is that the 20 some clicks aren’t  all “for you” all the time. (which is one of the big benefits of our BikeCo Pro Tunes where we narrow the performance window for your riding style, goals, weight, ground speed etc meaning each click is controlling a smaller performance window giving you more options but more on that another time).

Your needs will dictate a smaller window of adjustment “works” for you. Then you have to find the sweet spot that all of the adjustments are in a functional state.

It’s kind of like a mixing board with a bunch of slider adjustments. There’s settings that produce a great sound – even, balanced. But if you get one of the dials way out of it’s sweet spot you’re going to have to try to use the other controls to compromise the sound (or bike performance in our case) but it’s never going to be that real true, great sound.

If you want your suspension to work at it’s best you need to identify the “green” zones for your setup and work to keep Air Pressure, Volume Spacing, Compression and Rebound in high functioning areas.

Really the most influential animation in the video, for me at least, was the visualization of when rebound slows the air spring’s return to neutral creating a momentary impact until the forces trying to compress the suspension equalize and overtake the air pressure.

Let’s look at this a bit further.

Pressure A / Volume A = Pressure B / Volume B

The smaller the volume the more the air compresses and pushes back on the walls and piston head.

It doesn’t matter if its your riding weight, an ACME anvil from a cartoon, a tie down strap or a hydraulic circuit that “keeps” the air spring compressed – when the suspension compresses and lowers the volume the PSI rises.

For the following example we’re going to look at too much rebound, or a setup where the rebound is too slow. Mind you this is happening in instants – but it is happening.

The suspension compresses and begins to return for the next feature.

Ideally the system resets with the air spring returning able in a range to support the next input as evenly as possible.

If there is too much rebound dialed in the suspension isn’t going to return to the ideal extension. This does a few things all kind of instantly.

It may change the roll over angle or approach on the next feature. It also may effect the bike’s geometry. This is particularly a bummer in square edge hits that might try to stop the bike while you go flying over the top.

Even in less consequential terrain you lose the suspension’s float momentarily. Since the air spring is being held compressed more than ideal its PSI is higher than ideal. This means when the suspension reengages it might as well be rigid until the forces applied over take the PSI on the piston and allow it to begin to compress.

As an extreme example imagine the difference between punching a padded wall or missing and putting your fist into the block wall behind it. The pad, or air spring, begins to absorb and dissipate that energy so there isn’t the “hard stop”.

This is also the reason you pump the trail when riding. Pushing the bike down and pulling it up give you a secondary, active, suspension system to minimize the shock loads.

Want the worst of all worlds? Set your bike to ride unbalanced on the air spring and then go ride it dead sailor! It’s going to rattle your teeth out, hurt your hands and skip of trail. Exactly the opposite of the balance we’re looking for when understanding MTB suspension controls!

In the image above we’ve illustrated what we’re using colors to represent loads (or weight, or pressure depending on what makes it easiest for you to understand).

On the left we show a setup with ideal rebound allowing the air spring to extend into a range equal to the next input load. The air spring will absorb the increasing forces from yellow into the orange range.

This means the energy from yellow to orange is forced back onto the rider until the darker orange of the air spring equals the load applied at which point the air spring will begin to carry the load.

This translates as a harsh feeling through the bars or pedals.

This creates a harsh ride and sometimes will actually feel quite “notchy” as the suspension transitions from air to damper and back.

All of this circles back to a basic understanding of the ideal ranges of setup and performance and trying to find that sweet spot where the systems are truly working together and helping fine tune performance throughout the travel.

We thank you for the read and hope you took something away that will help you better understand how to dial in your MTB suspension.

We invite you to check out the other content and the best products in MTB here at BikeCo.com

BIkeCo clients have access to our team to help them fine tune stock or Pro Tune Suspension.