What Got Me Outdoors – Nate at BikeCo

I had a vaguely familiar feeling this week. It took a moment to place it. Kind of that antsy, working big hours, staring at a screen, issues large and small, real and exaggerated.

More of a vibration than emotion (shit, I sound like a hippie). I remembered where and when I’d noticed it before. It was just before I got into riding MTB.

At the time I owned an automotive fab shop doing custom suspension design, metal work, etc. Around the ’08 recession it went from being a tough business to not enough work. I sat in an office every waking minute trying to find ways to keep it all going. The four walls and computer screens were my existence. I felt compressed. Like every day the office walls were somehow 3″ closer to me. (sounds familiar eh?)

I needed something, badly. I tried a handful of things.

Exercise seemed like a really good idea, but I hate crowds. Gyms were out. I’d been a bit hard on my knees growing up, well, and frankly I hate the idea of running. Like hate it.

So I got a bike “just for exercise”. And it was over. Just, all over.

My brother was an experienced rider and showed me the ropes. Got me riding in the steeps. Helped me get comfortable outdoors. (like I was so new to the outdoors I was nervous about everything, some of it real most of it exaggerated at best) Looking back, that might have all been in the first few weeks I owned a bike. I went from a total rookie to decently confident and at least aware of what I could and couldn’t do.

What captured me, before I found the adrenaline of thumping down terrain or zen floating through a sequence of turns, but what first locked me into the sport was the connection with nature. The green (or not sometimes, we are in SoCal), the fresh air, the space, the views. But what was magic, like real, actual, not hyperbole magic was seeing and interacting the animals in their element. The realization that this deer, that rabbit, the hawk, whatever, was out doing it’s thing either way. Didn’t matter what was going on in “my world” – they were out doing their thing. I could escape a couple hours at a time and could immerse myself in something bigger. 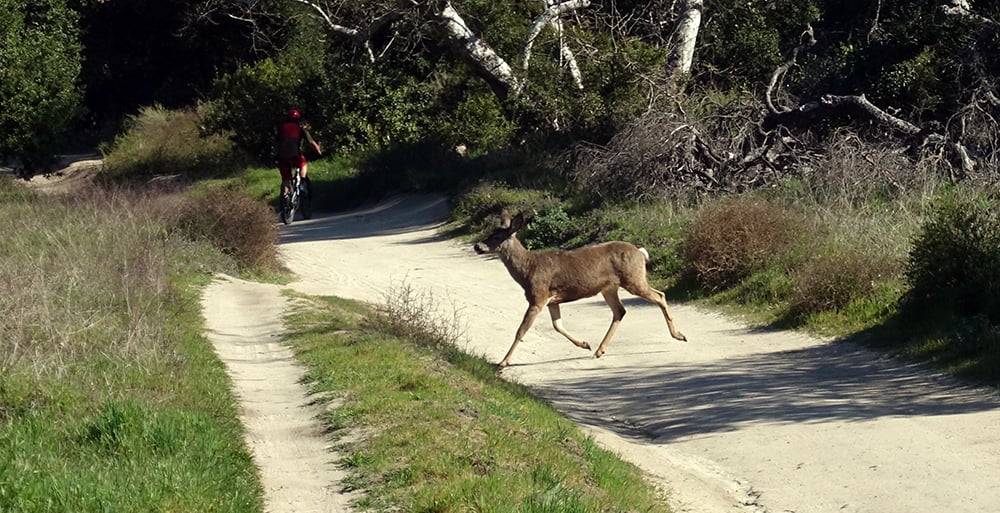 So, the images in this post are some of my favorites from the last few years that are on my phone – some newer, others older. 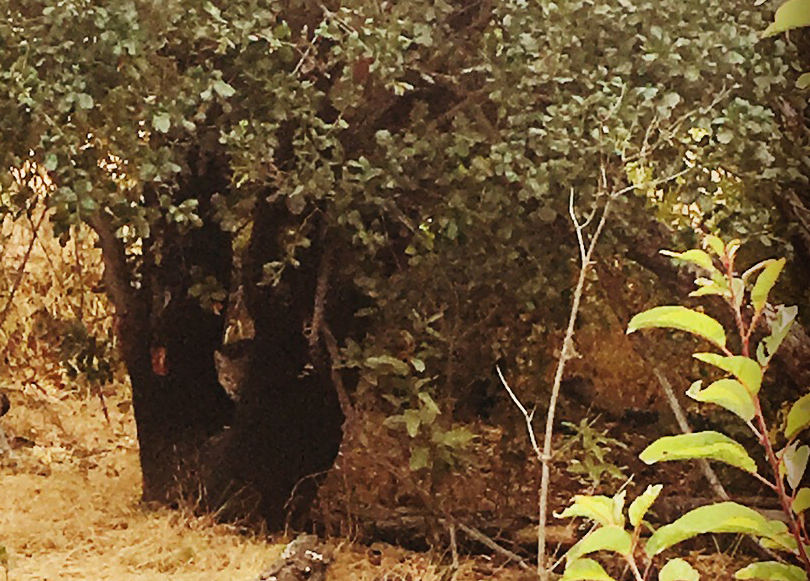 iPhone pic – not my best pic but one of my absolute favorites. I love bobcats. It’s in the crotch of the tree. 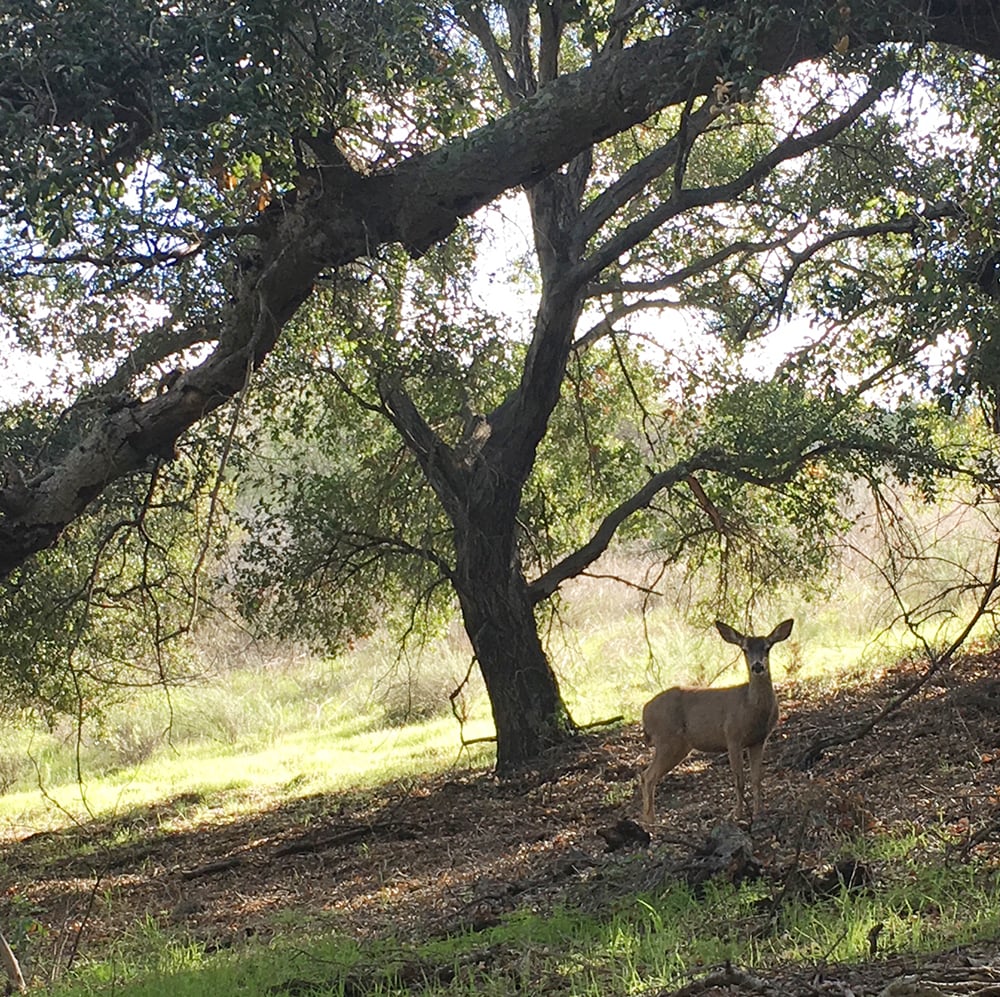 Another iPhone shot. This one was super close on a morning pedal. (always sad on phone pics since it looks so far when you can basically hear them breathe!) 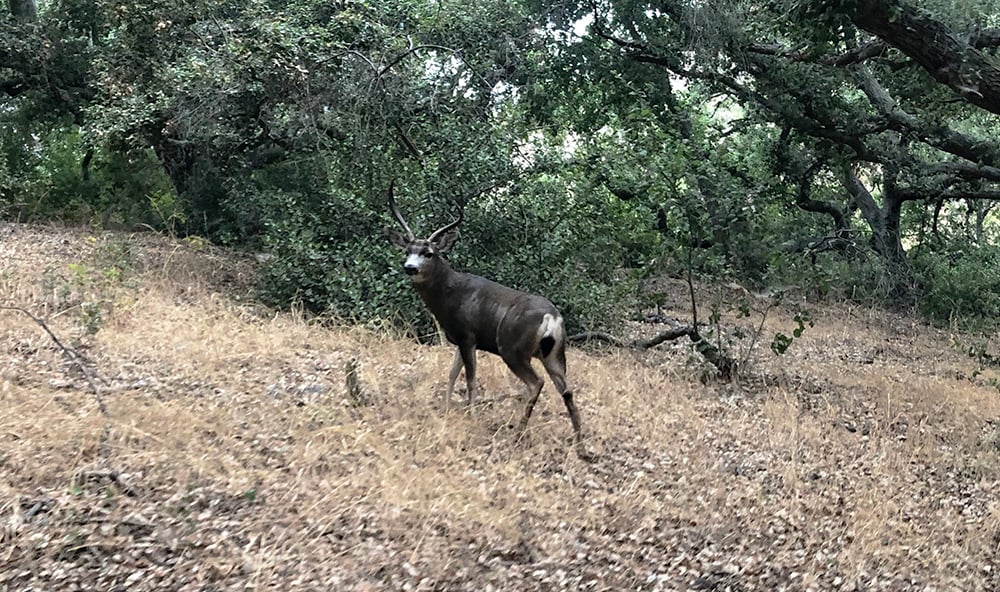 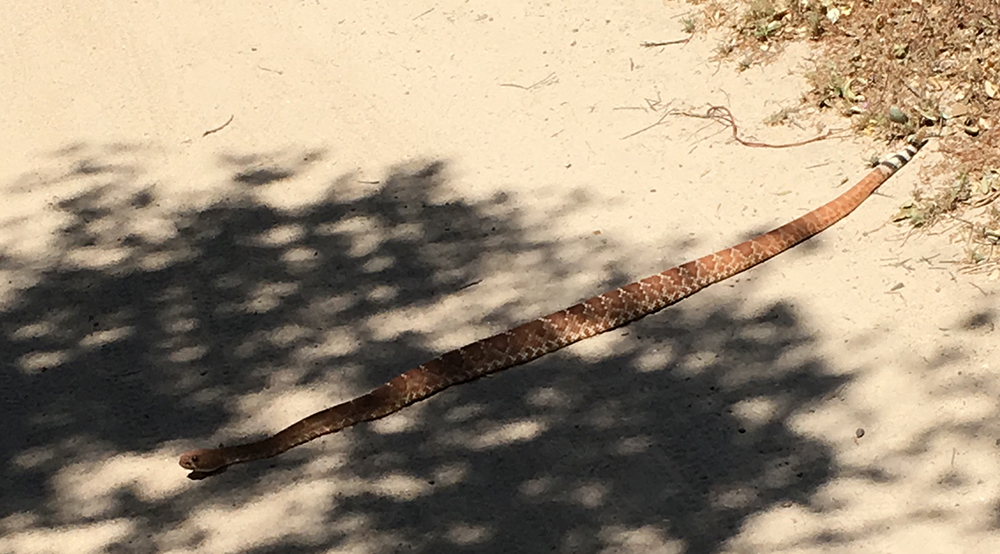 onto animals I’m kind of afraid of… experience outdoors has let me know this is a relaxed rattlesnake. 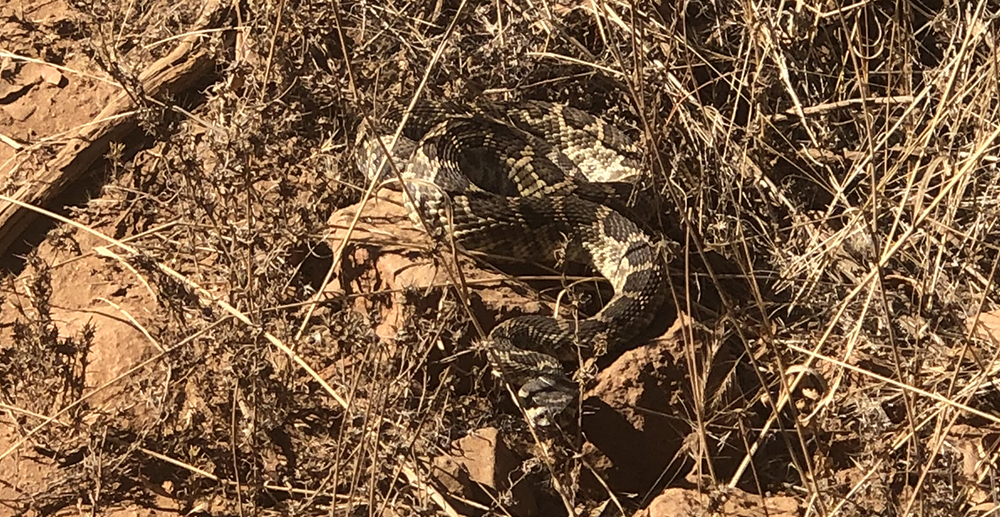 this one, nope, not relaxed. gotta give it a wide berth. 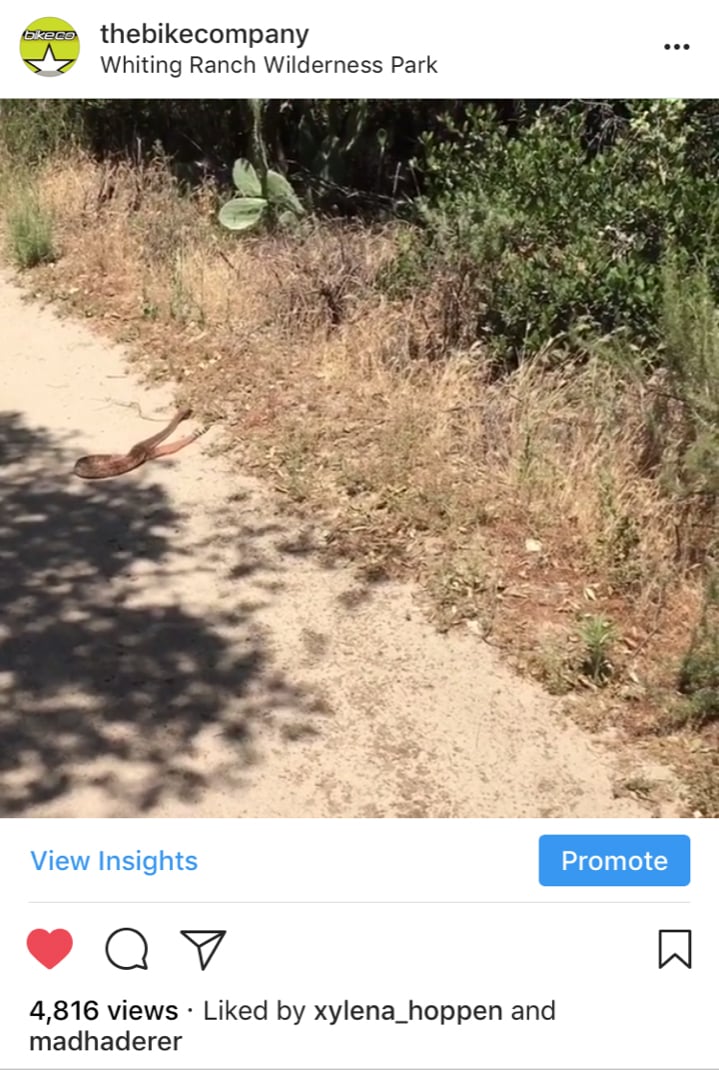 but, experience helped me understand ways to deal with them without getting hurt or hurting them.
through BikeCo we hope we’ve educated many people on dealing with snakes.

Well, whether you see that as a love affair or escapism, your opinion won’t bother me either way, but that magic is a huge reason I rode. And the more I rode the better I got. The more I understood.

First I upgraded brakes. Riding wasn’t as sketchy. Then it was, cutting edge at the time, a coil rear shock with IFP and compression adjustments (I think)… Now the bike stopped and stuck to the ground. It was once again, an entirely different sport.

Once I was confident that I was a pilot not a passenger on my bike my riding greatly expanded. 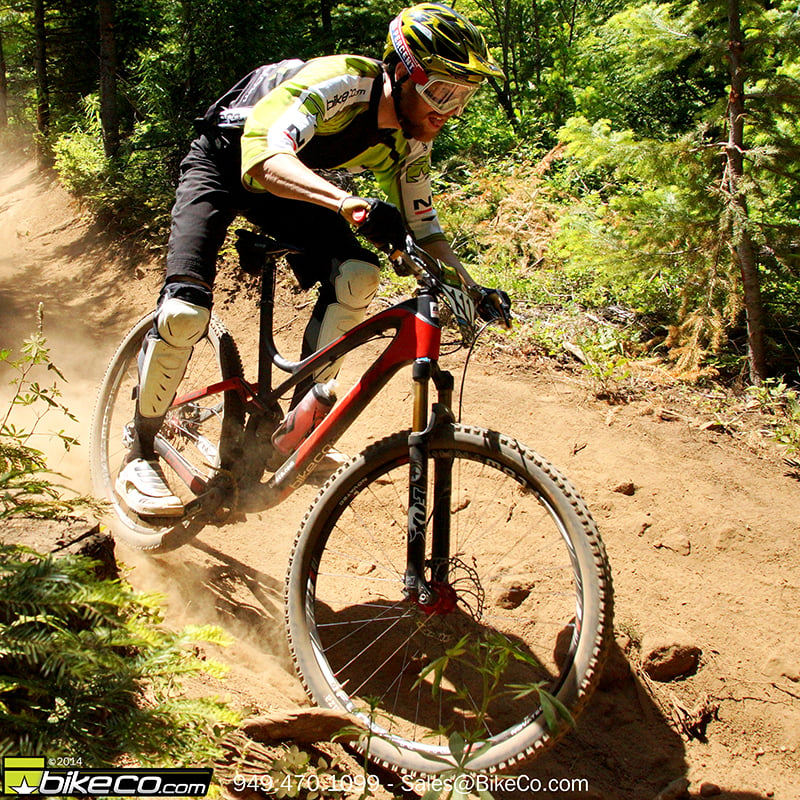 my brother Jon racing enduro in Oregon years ago.

I loved riding with my brother. I found out an old friend rode was well and we reconnected. Whether solo, with one buddy, or up to my personal max of about 3 riding friends (never understood the snake runs of 20 people I see, but hey, to each their own) I enjoyed pedaling. 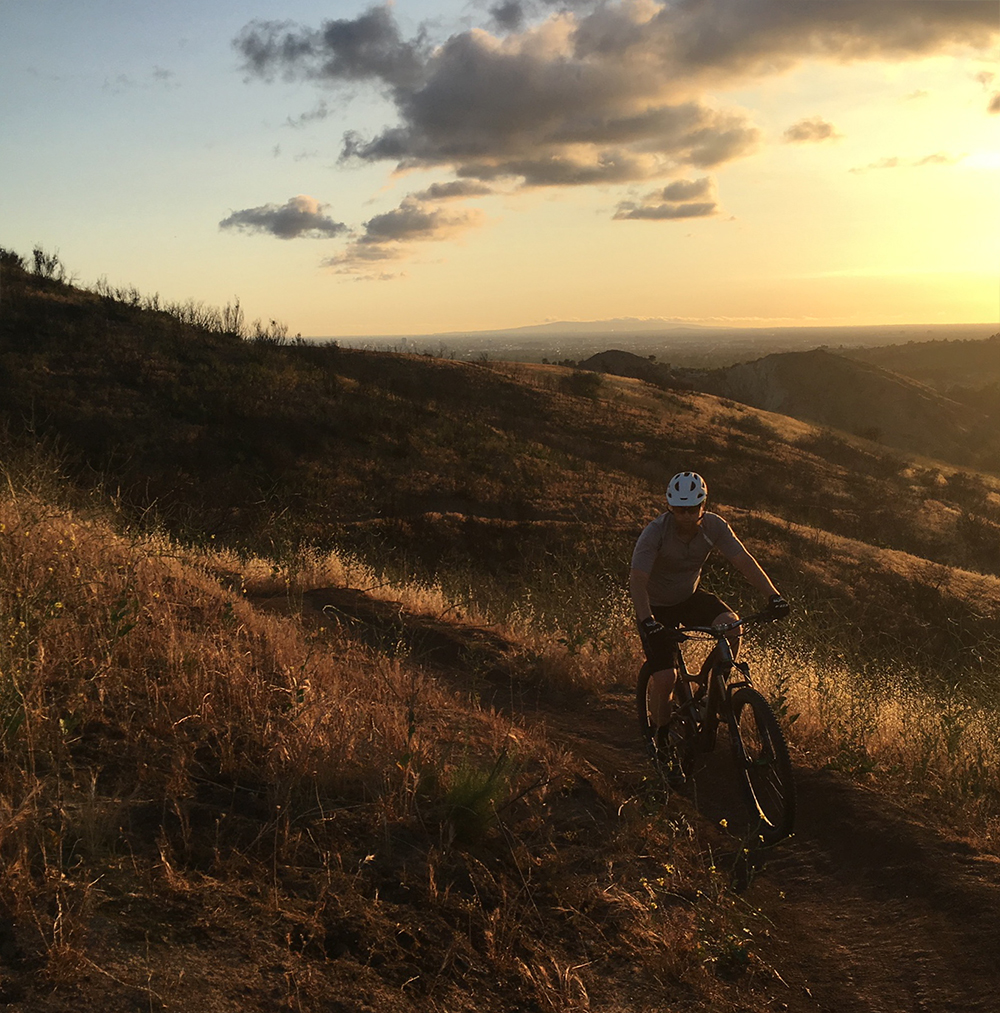 my buddy Leif on an evening pedal in Santiago Oaks 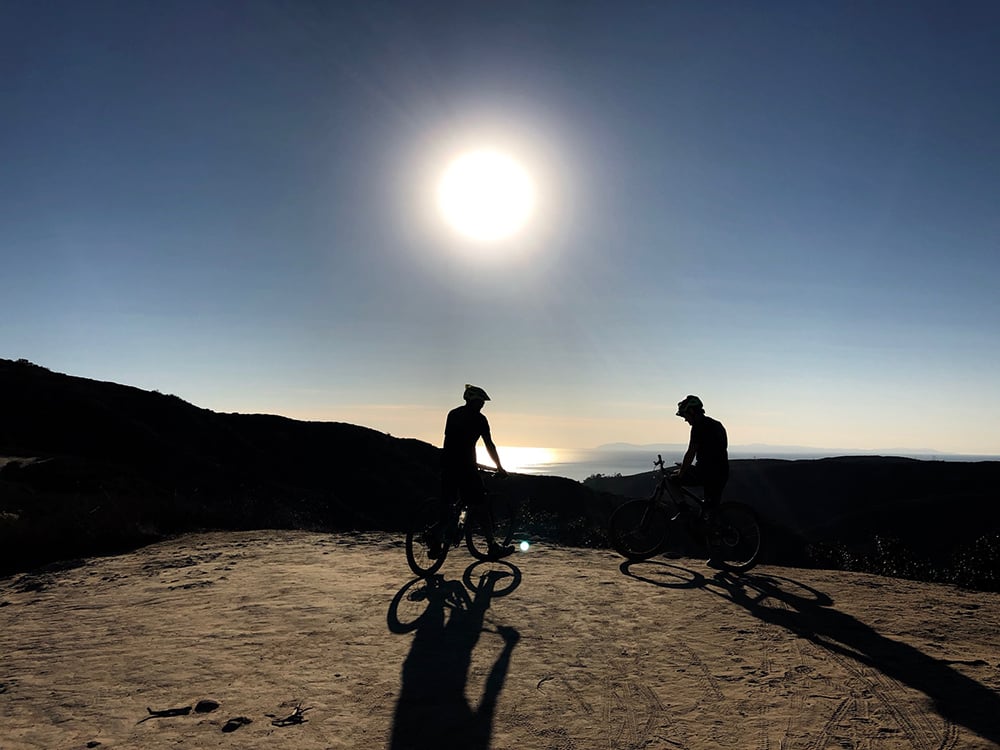 Tracy & Joe on an afternoon spin in Aliso Woods Canyon 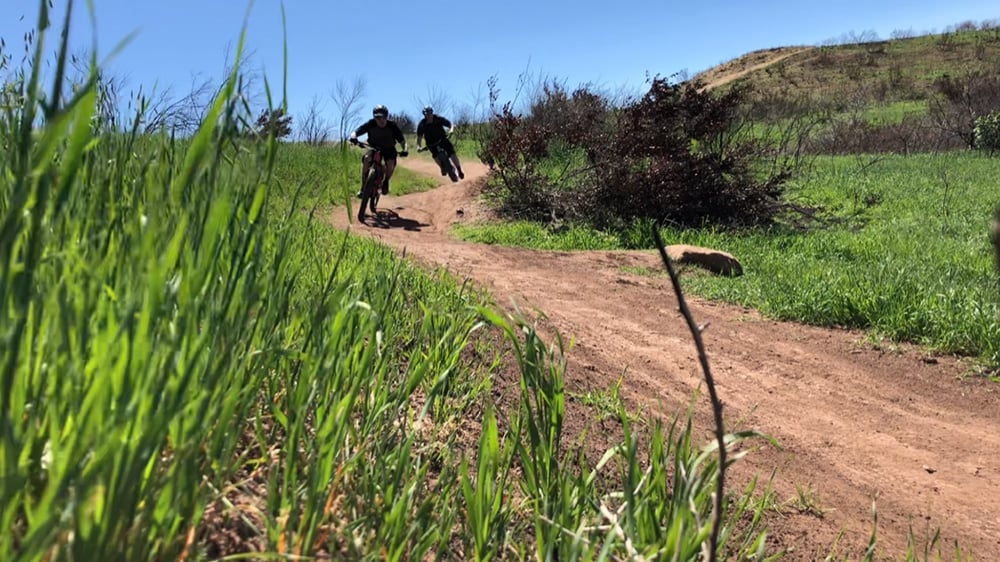 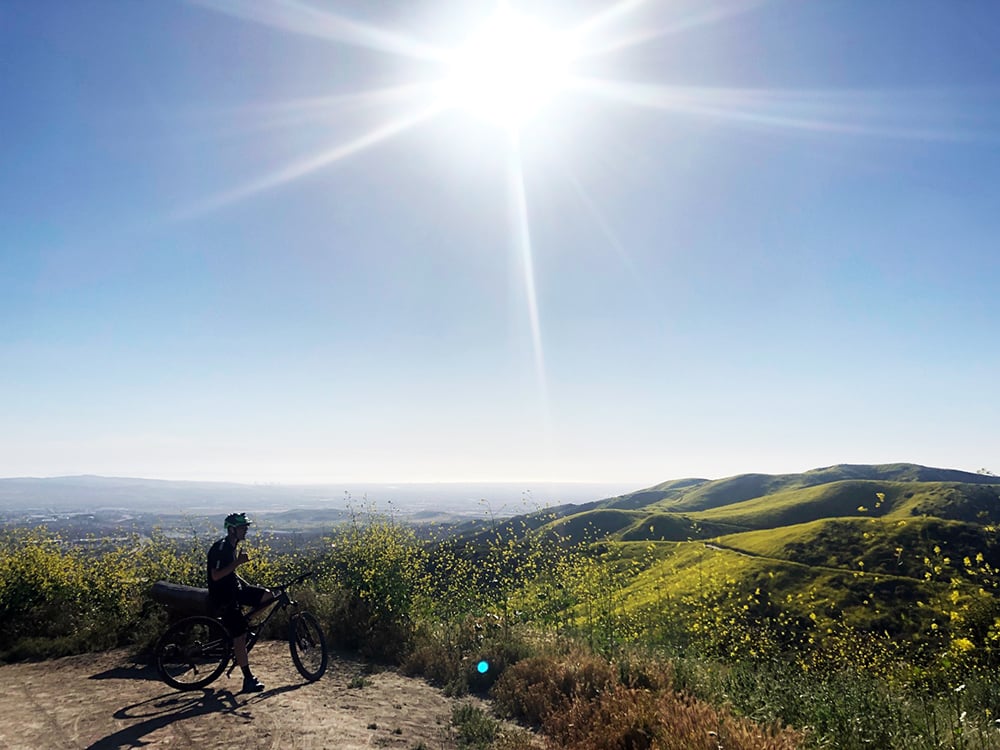 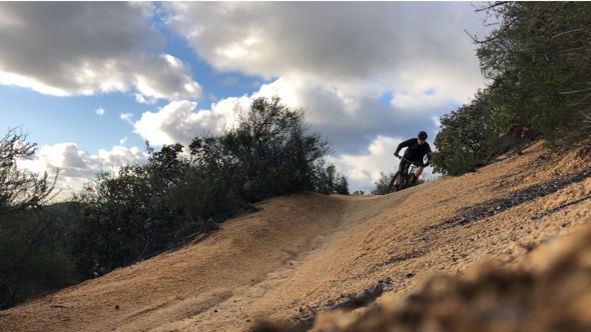 couple self portraits pulled from an iPhone shooting video on the side of a trail. I’m allowed some vanity right?

Starting in the County Parks I quickly expanded out into the National Forest trail networks. I found I was at peace the further I found myself from the masses of people. With some experience I got comfortable outdoors (pretty quickly actually). I had adventures alone and with my buddies.

Even when things got sideways we tended to find something to laugh about later. It almost became the more ridiculous it was DURING the funnier it would be after.

So much elevation we went from hot to snow and none of us had the right kit? Whoops. Try to stay warm.

Caught out in storms? Hero dirt I guess. Gonna be some garage time when we get back on the bikes.

Can’t recall which of the finger valleys the truck is in? Well, it wasn’t in the last one we rode down, so there’s one less we it could be in. (mobile phone GPS has changed a lot of that)

Shit even the occasional mechanical failure and hike back was fun looking back. Like the time a cable snapped in the first mile or so of a San Juan night shuttle. Rather than nursing it down I figured I’d hike back up and bring the shuttle truck back down. That’s a solitary hike in the dark by yourself pushing a bike uphill!! But it was a good laugh over the midnight meal at Denny’s on Ortega.

Over the years I’ve ended up with a much clearer perspective of what’s important to me. And I credit a lot of this to riding MTB.

Animals and environment went from topic phrases to experiences I could speak on. That I could understand. That I could find other ways to support.

I’m in better shape. Physically I know I’m stronger when I ride. Mentally that workout as well as adrenaline dump put me in the most joyful place that I tend to find. Reaction time. Riding MTB improves your reactions. I noted that pretty quickly after I started. Your body and brain tune back in. Actions become instinctual, both on and off the bike. Your brain processes faster and your body reacts quicker. This fact dawned on me the first time my sunglasses came off my head when I managed to swipe at them, knock them back into the air and snag them with my other hand. All before I’d acknowledged (in my brain) they were falling. When I looked up my brother said “yup, that’s riding reactions” and looking back I’d say that’s true.

Being more confident outdoors opened up a lot of other adventures as well.

More remote hikes weren’t as intimidating. (Be prepared, I don’t want to hear they find you with “SCREW YOU NATE” etched in the dirt with a stick hahaha)

I’ve been solo camping in the desert on my motorcycle a couple times.

Recently I bought a small sailboat to mess with. Someone asked “do you think you can do all of those steps quickly?” and I thought, I ride bikes. I can process those factors and react. Let’s go…

What started as “I’ll buy this bike for some exercise” refocused me where I am happiest. Outdoors, in the open, enjoying the world. And I wouldn’t change it for a thing. 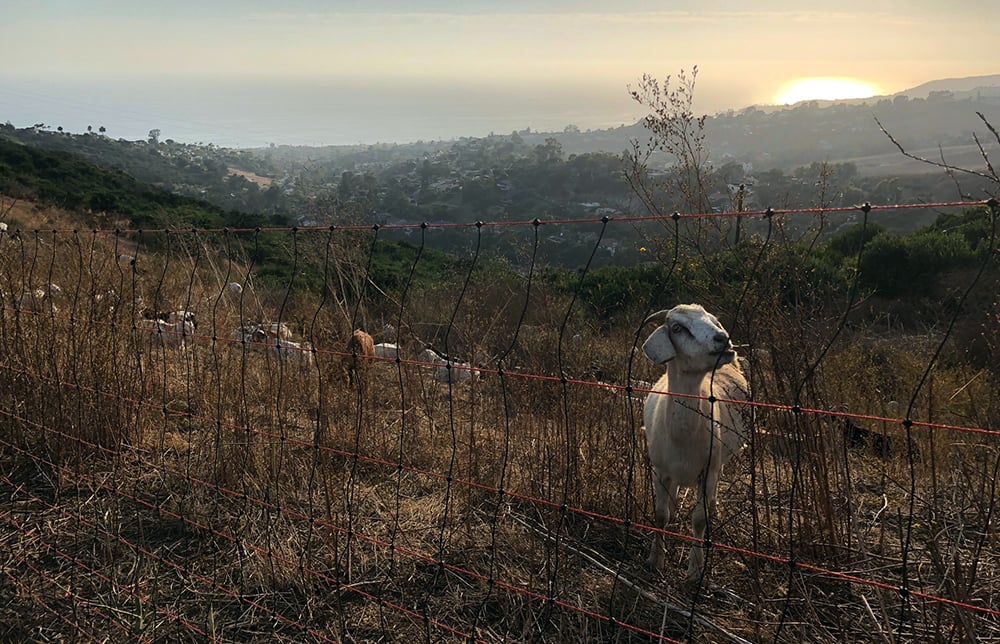 one of my summer favorites, the fire prevention goats.

sometimes its hard times and change, but you ride through it. after the fire in Santiago Oaks.

Cocktail Rock. blue sky, white clouds, no one around.

i’m not even sure if this was a ride or a shooting testing – but MTB took me there.

happy place. solo group ride getting outside and decompressing. 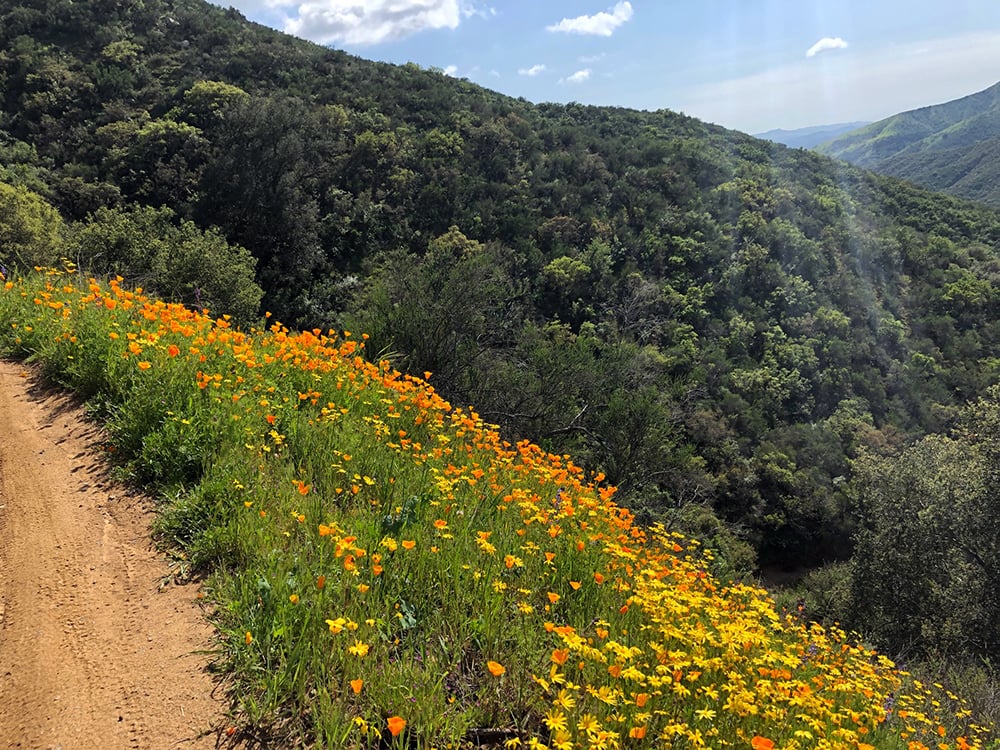 four corners before finishing the climb to Joplin. 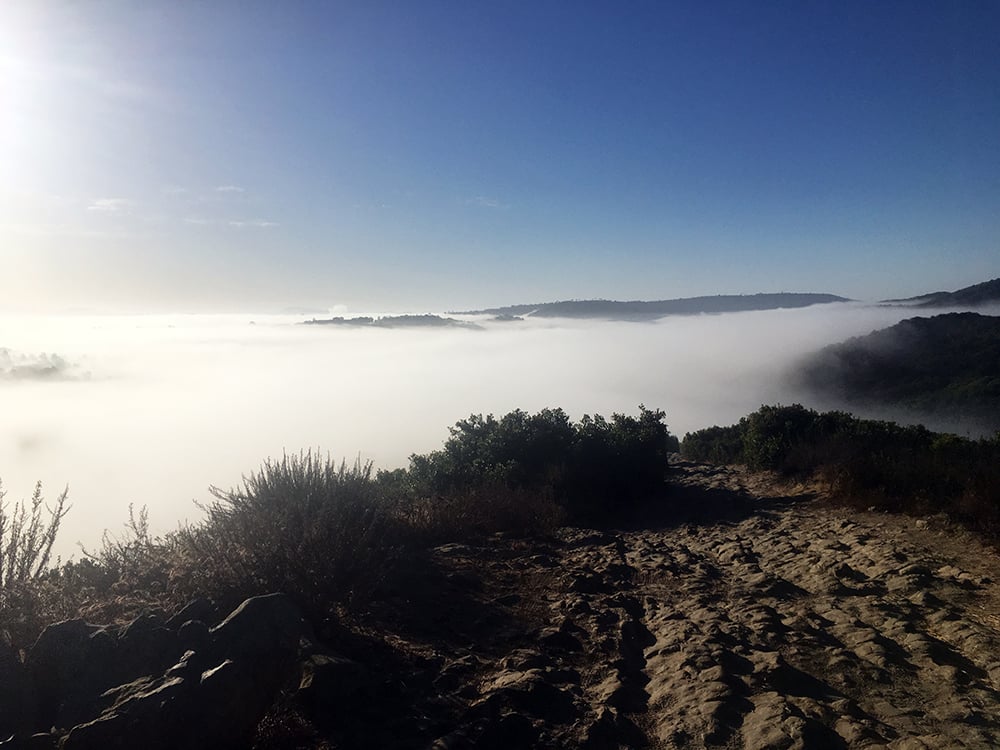 wheres the trail take you? that’s part of the adventure. Rock-It morning drop into fog.

still one of my favorite pics, days, rides.

Thanksgiving, some year. rode to old camp in a drizzle that turned into an out and out proper storm. didn’t see a soul out there. trudged the climb in cold, hard rain. the kind that stings your face. ripped the descent enjoying the adventure and trying not to get hypothermia from the water and windchill. Got to the bottom of The Luge, clouds open up and we get this. ominous clouds but an amazing blast of sun and a double rainbow. its out there if you’re out there.

So what got you outside? Is it similar to what got me outdoors? What’s kept you there?

See you, at a distance for now, on the trails… Nate at BikeCo.com