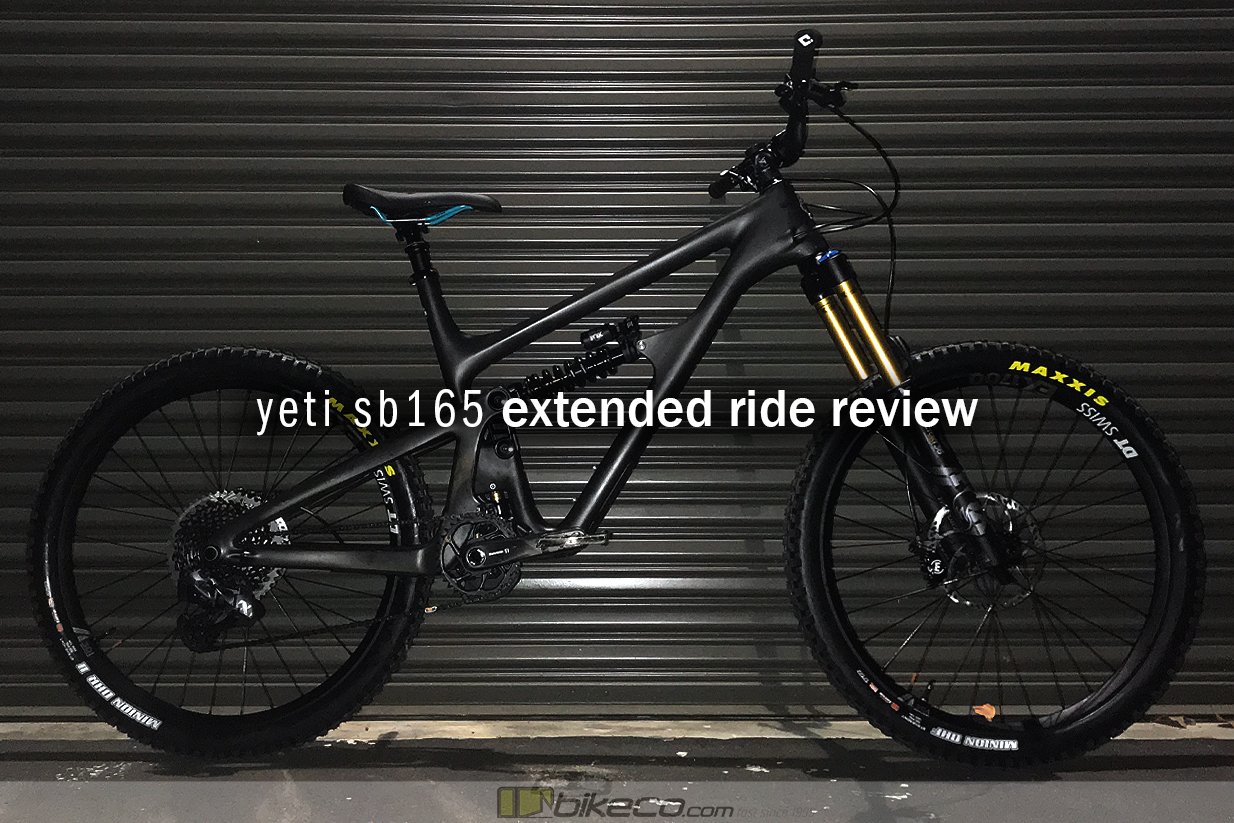 BikeCo’s own Chris Fuller has happily owned a Yeti SB165 since their launch. I sat down with him to discuss the magic he’s found in a Yeti SB165 Extended Review.

So we got the SB165 demos in and you took one out on trail and had to have it?

Ah, no. In fact the SB165 is the first bike I’ve purchased without a trail demo now that I think about it. I saw Yeti’s pre-release teasers on the bike and something about it caught my eye. BikeCo landed the bikes I ripped one around in the parking lot. And I was just blown away. It was absolutely insanely good. My expectations were on “big bike” feel – but this bike doesn’t feel “big”, it doesn’t feel like a park bike or anything. It accelerates. It changes direction. And the thing that’s really hardest to believe but true, the bike has great ‘pop’. It’s a coil bike that pops like an air bike. It feels so lively and that blew me away. Had to have one.

A “Big” Bike with Pop

So the “big” bike’s pop is what initially really captivated you?

Ya the bike isn’t sluggish. It isn’t stuck to the ground like some of the bigger bikes, especially when you put a coil on them.

Unlike a converted air shock design, Yeti knowingly designed this bike around a coil but kept the performance spectrum that the SB series has been known for. I mean it’s really an amazing balance – the balance between the pedaling, the flickable pop and the traction in big, chunky terrain. 180mm front, 165mm rear – that bike should live only in the steep, big stuff right? But it doesn’t. It’s a fun bike even on XC trails. It’s lively, it gets around corners.

I assumed I would really like the bike in the steeps. In the chunk. But I think the biggest shock is really how the bike pedals. How it’s lively in terrain that doesn’t need anywhere near the travel. This bike should be on way more rider’s short lists ya know?

You’ve run 29’s for a while – did you go back to the 27.5″ for a change or was your riding heading more that direction?

Well not really. I mean I guess I’m probably more of a 29 guy all around but I feel like this bike is so ridiculously good I don’t notice the differences. The stopwatch says I’m faster on the SB165. But what feels weird is I’m faster without feeling like its faster. The SB165 is super capable and intuitive to ride. Its an easy bike to get confident on and it feels good at speed.

I have gone to narrower rims than on my previous 29er. 30mm, or slightly below 30mm internal width rims really bring out the snappiness on this bike in my opinion. Some riders might like the higher volume setups, but I find that the bike’s suspension makes up for that. Then with the narrower, faster tire profiles you get that unreal liveliness even on the “bigger” travel bike.

Setup and Dial In

Any tricks you found dialing in the bike?

Well dialing in the front and the rear was a bit of work. Getting the feel right on ramp, rebound, compression ya know?

I’ve tried a couple different springs before I settled in on one I really like. I ended up going to a heavier spring rate than Yeti had spec’d for my weight. Then I worked with Joe when he was between EWS rounds to help me dial it in. The bike was amazing, I didn’t really have complaints per se about it – but I have access to Joe so why not get some help.

Joe helped me refine both the preload on the spring as well as compression and rebound settings. The first ride after his adjustments I was blown away. The rear end was tracking a lot better, which I didn’t know it could honestly. I noticed that the front end just had so, so much better feel. The rear end must have been losing traction and shifting the weight around just enough. Once I had the rear end super dialed the front end came around.

I think it was an eye opener on how you could chase setup in the wrong direction and really get into the weeds without some insight.

In the past bigger bikes tended to mean more maintenance as they’re ridden hard in gnar – how has the SB165 held up?

No issues. I had the frame prep before I built it which I know helps the pivots, bearings and such. In fact with the AXS setup it probably is in the stand less than my previous bikes. AXS is really kind of unbelievable. I’m glad I went that way. I tend to flip bikes every couple years since something new comes around but I was impressed with Yeti’s warranty. They know they build a quality bike.

How does the SB165 compare to other bikes you’ve owned or spent more than a ride or two on?

I mean probably hard to compare my last 29″ DW Ibis Ripmo with the 27.5″ SB165 without getting into a ton of opinion.

I think it’s more fair to look at the SB130. I’ve had that bike out enough to talk about it. Since it’s a Switch Infinity bike I think it’s a bit less opinionated between the suspension types.

The SB130 is super quick handling. Ultra nimble. Maybe likes to dance in the bigger terrain but lacks a little bit of that grunt power to smash things. The SB165 is plenty nimble, but it’s made to behave in bigger terrain. It’s got more grunt to it comfortably.

Both Switch Infinity bikes pump the trail really well. If you jump on the power out of a corner the SB130 is going to accelerate a touch faster for sure. But the SB165 gets up to speed quickly too though and probably comfortably carries more speed into and through chunky corners.

So what would you change if you were heading the design team on updates to the bike?

Ah, nothing really. Like what else can you do? I don’t pay a ton of attention to geo, except where my feet and hands go. So some of the internet “it should be longer, shorter, taller” whatever is just chatter to me. I ride a slightly taller cockpit than it was spec’d with. Stem length is in the right range for performance.

I mean, its’ a bike you could mullet. It’s approved for double crown forks.

Fun on Whiting Ranch days before work. Fast and confident in the steepest trails in Laguna. It’s comfortable riding back country chunk. Not only riding down the chunk but spending 6 hours getting up there to ride it.

The only thing that really shocks me about this bike, and it sounds like such a tag line, but that more people don’t consider it as an all-arounder. It’s that good.

Not sure I can add much to Chris’ thoughts! This Yeti SB165 Extended Review is written from an owner’s take on a bike consistently ridden. After sitting down with Chris I could tell that this isn’t hype to him – the SB165 is that good. The balance between the coil designed Switch Infinity Suspension and Yeti’s cutting edge geo is dialed in. Chris’ bike weighs in only a pound or two heavier than my SB130 (GX / King build) a fairly small price for this level of bike.

Check out BikeCo’s Online Custom Complete Yeti SB165 Builder or get some build ideas with from Yeti Factory Builds!

If you’re in the market take advantage of the team of experts here at BikeCo.com. We will help you get the best spec, setup, tune and after sales service in MTB.

Our team shines selling bikes. Our team EXCELS at dialing in our client’s setups to provide that “AH HA!” riding moment when everything comes together.