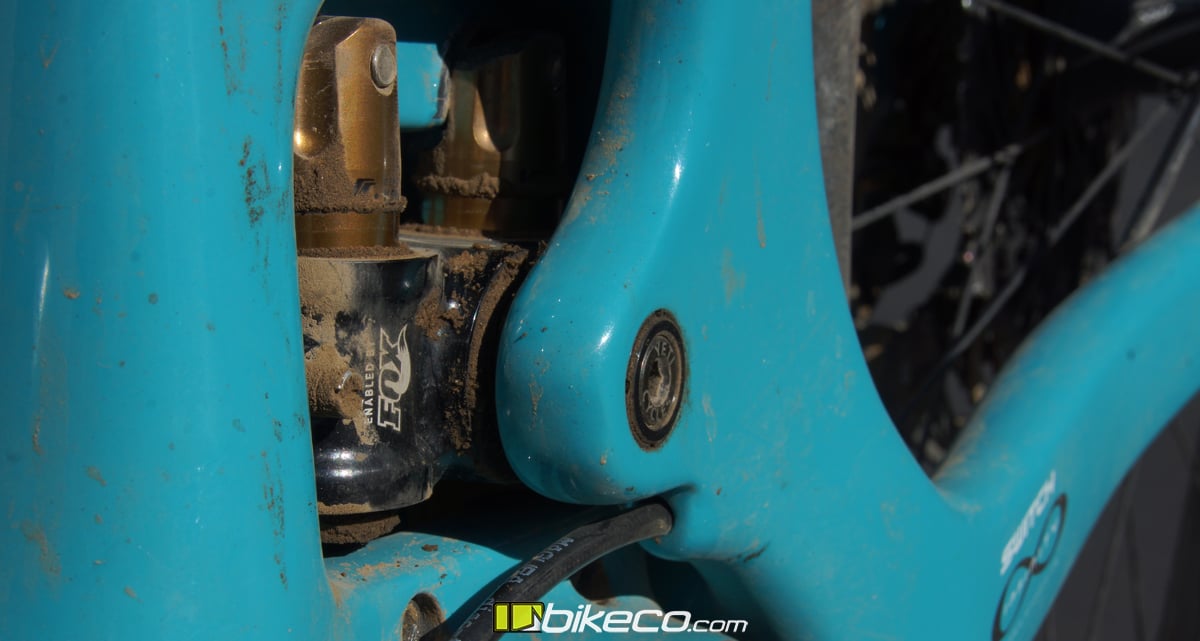 The current Yeti Switch Infinity suspension was a fairly radical departure from previous Yeti designs – but man they nailed it.

Yeti has used the SB (SuperBike) designation prior to the current Switch Infinity design. Earlier Switch Infinity pivoted the lower linkage through eccentric spacers and bearings. This involved large diameter bearings as well as a 2 piece “micro-switch” assembly. Visually it is quite similar to the Ibis Ripley – although it does a bit different thing based on patents, etc.

SB66 bikes featured this design. Whether from geometry, wheel size, suspension evolution, the move to all carbon fiber construction (which allows much better placement of pivots / flow of stress) the SB66 never quite caught on as much as it’s contemporaries. I spent a good amount of time on the SB66 years ago while we were developing 27.5″ conversions (remember those days!?). The SB66 had a 100% race bike personality. 100% race 100% of the time. Problem was (is), I’m not a racer and I don’t ride like a racer.

The early Switch Infinity, coupled with the less refined designs mentioned above, created a bike that wasn’t complimentary to all riding speeds. The SB66 was best behaved at full tilt boogie. It begged for more speed. Until it spit you off! The bike had a bit of a “hard” speed limit depending on your skillset.

OK, why the history lesson? Well if the early Switch Infinity was the last time you were familiar with Yeti’s suspension it is quite literally a different beast. 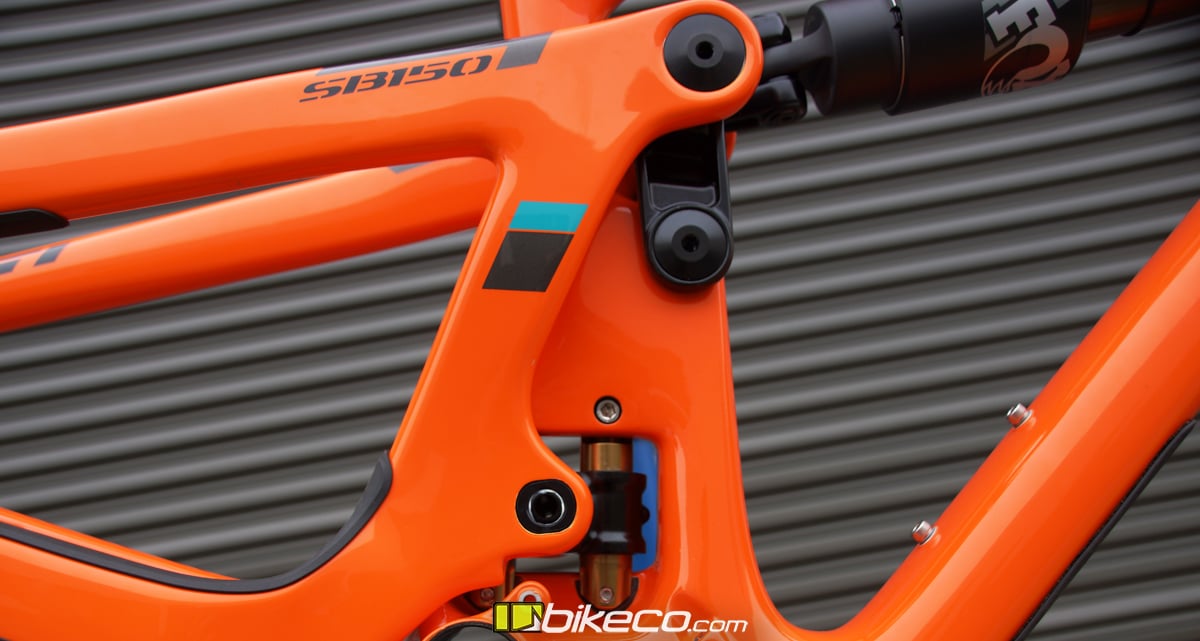 Back to the current Yeti Switch Infinity Review.

The modern Switch Infinity’s vertical columns are a huge departure from classic multi-pivot suspension. When launched these were not only visually striking but generated a lot of questions about service intervals, performance, etc. Well let’s get this out of the way quick – service is simple and I haven’t seen any unusual wear at all. We are located in Southern California, so we don’t have many water crossings, etc but I wouldn’t be deterred from the bike even if we did.

Yeti has some great info about the Switch Infinity’s design, application as well as service on their website. This review isn’t to forensically explain what the modern Switch Infinity does as much as to help readers understand how it feels. And it feels good.

The latest Switch Infinity paired with Yeti’s commitment to a specific geometry theory pays dividends. Yeti’s are long, low and slack. The tend to have notably more fork than rear travel while maintaining an incredibly balanced feel. Millimeter for millimeter Yeti bikes ride “bigger” than you would think they should without giving up pedaling efficiency.

I reached out to a long time client / buddy to get his 2 cents on Switch Infinity, particularly his SB130. Leif’s been riding for years at this point (we got old I guess, or he’ll say I did) with a lot of riding experience on VPP and DW suspension systems.

“Not sure if it’s the result of the suspension or just the bike in general, but the SB130 manages to be both poppy and plush depending on where and how you’re riding. The Ripmo is the only other bike I’ve ridden that has both of those characteristics. ”

Add Balanced and you have my initial thoughts dialed in. The more I ride Switch Infinity the greater my appreciation for these three characteristics.

Switch Infinity provides notable “pop” acceleration when you jump on the gas or pump the trail.

While admittedly I’m not much of a climber I do appreciate a bike that doesn’t make it worse! Switch Infinity bikes behave better than you would expect them to per class. My SB130 100% out-climbs my skillset. The SB150, the larger travel 29er, feels a touch slower than the 130 but much better than you would think an EWS race course smasher would pedal uphill. I have less hours on the 27.5″ SB6 and SB5 but they have similar personalities climbing – the SB6 is bigger but climbs respectably for sure while the SB5 is a bit more nimble uphill for sure.

Where I appreciate the pop much more than climbing is pumping the trail. Pump the bike into and out of the holes as well as corners for free speed. It wants you to and is well behaved when you do. Switch Infinity bikes, when setup properly, are the best balanced bikes when aggressively pumping the trail for speed without being squirrel-y. You can attack out of a corner knowing the bike will comfortably track. Unlike bikes with too much pop that might shoot you off the other side of the trail, or bikes lacking pop that don’t benefit from pumping the trail the Switch Infinity really balances comfortably.

Plush is an interesting marketing term in MTB these days, well for a lot of days now I guess. It’s really a balancing act of compliance and support. Grandpa’s old Caddy was plush, but it wasn’t efficient around corners. An F1 car has enough suspension support to rattle your guts apart but will stick in almost any corner these days. With a mountain bike we’re looking for an appropriate balanced feel riding through terrain without sitting too deep into the sag creating other issues.

When describing a bike as “plush” we typically are combining small bump compliance performance with ramp rate, or a bottomless feel. One without the other creates issues. Without basic small bump compliance tracking is a problem with the bike bouncing all over the trail. Without a proper design factoring air ramp rate, damper capabilities as well as a suspension’s mechanical advantage rate a bike doesn’t ride balanced.

The Yeti Switch Infinity is extremely balanced – they dialed in these factors. Switch Infinity bikes are comfortable to ride central in the cockpit with even weight fore and aft. They are well behaved riding further off the back end, particularly with a bit more compression in the rear shock to accommodate for the weight shift. If, like me, you prefer a bit more fork you might have to get up on the front end a bit more but it’s not extreme.

A well balanced bike allows riders to control front and rear wheel through a wide variety of riding conditions. The Switch Infinity suspension behaves in steep chutes, likely a good portion of this is Yeti’s geo, without giving up traction in the fast flowing sections.

I’ve been spoiled to work with the best in MTB for many years here at BikeCo.com. It’s been incredible to watch the development of suspension design, damper design, geo, etc. We’ve seen bikes get notably better and better. Better balance, more confident, longer lasting.

Switch Infinity Suspension is easy on bearings when setup properly. Some suspension designs nail this, others miss. Minimizing thrust load through bearings keeps them in better condition, longer. Switch Infinity bikes shouldn’t sound like pop corn makers unlike some other brands.

The newest Switch Infinity design has dramatic improvements for riders of all skills and speeds from earlier renditions. No longer do you need the racer “attack” mentality to enjoy riding a Yeti. The current lineup is incredible – fun, predictable, confident –  whether you’re racer fast, a competent expert or even a new MTB rider.

These bikes can be ridden central in the cockpit with control of both front and rear wheels comfortably. Proper Body English will improve ride characteristics – but you don’t have to feel like an acrobat leaping from front to rear to control the bike.

When put into the air the Switch Infinity has a balanced feel fore and aft. This confidence has you hitting features faster, which is pretty fun…

The Switch Infinity has a wide range of setup options based on rider personality, shock selection as well as tune. In fact, there’s a bike in the Yeti lineup for just about any rider.

Yeti’s setup lists a 32% sag for the SB100, 33% for the SB150 and SB6, as well as a 30% sag for the SB130 and SB5. Under the Support tab Yeti offers riders fairly accurate baseline settings although working with a quality resource will help you fine tune setup for your riding particulars.

One last thing to touch on. At BikeCo we offer custom suspension tune options to shift a shock’s performance window to your riding specifics.

For instance my personal SB130 has a Pro Tuned DPX2 rear shock. Riding the demo bike I found I was looking for a bit more support without compromising the excellent small bump compliance. While some of this support could be achieved from volume spacers and compression controls both of these modifications have effects on overall ramp rate, etc as well. Our suspension department was able to provide a bit more support through fluid modification as well as shim stack design. Our bleeds are better than stock as well, so I’m chalking some of the improved performance up to that as well…

I had Leif’s bike Pro Tuned as well although as a lighter rider than me our suspension team made a few different changes as well. I told him that the changes were based on my input and if he didn’t like it I’d have the guys modify it again. He told me he really didn’t have any complaints on the bike to start out – so I was feeling a bit of pressure…

At the bottom of a descent I asked him what he thought.

“I didn’t really notice much, which was good, except that I felt like I was coming out of corners faster. Now I was riding behind a faster guy and maybe part of it was mimicking his line choice but it felt like the bike had more support through the corners which was good.”

Bam. Maybe I could become a professional suspension tuner… Probably not. I’ll stick to marketing I suppose…

Are you in the market for a trail or enduro slayer? Chat with our expert staff about which bike, with which setup is right for you!