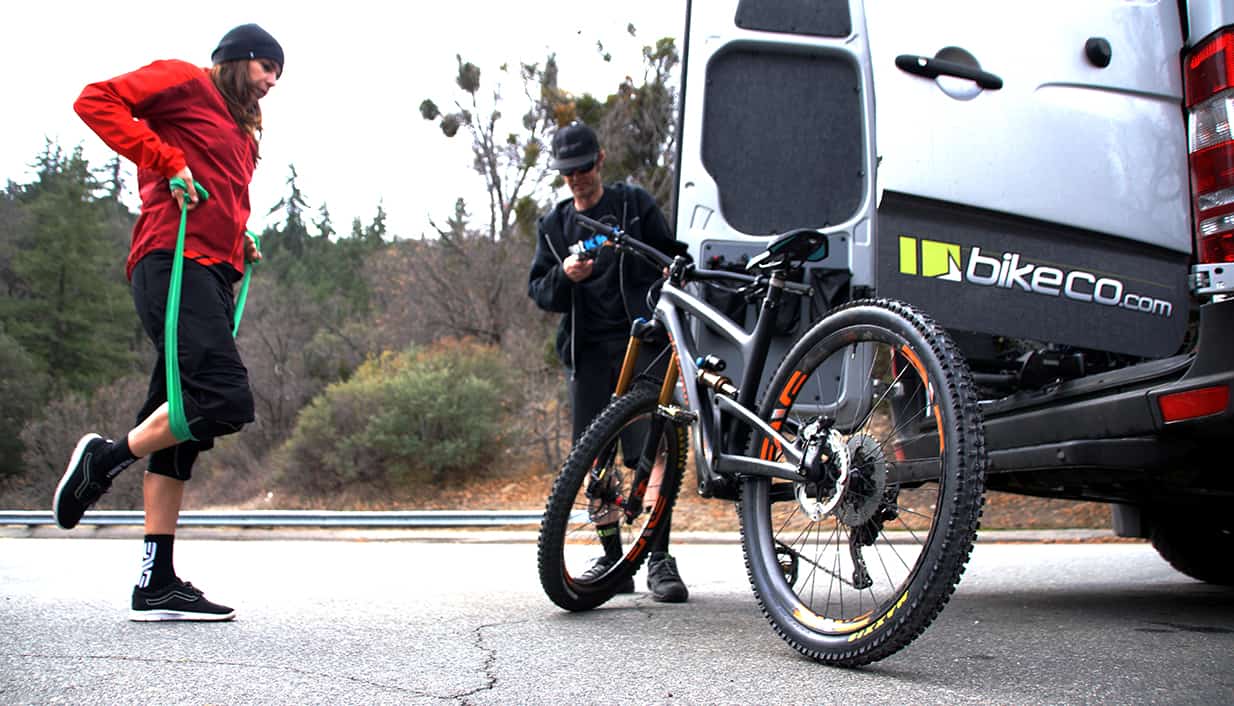 Who: Anneke Beerten & Joe Binatena What: Alchemy Arktos testing When: 2/14/18 Where: Crestline Why: Because

Shuttle laps in Crestline allow for subtle changes in suspension, tire pressure, as well as control locations to be quickly evaluated. Crestline trail features a variety of chunky rocks, drops, jumps, chutes and transitions. It’s a descent that pro riders can easily do six to eight runs in a day while staying fresh and on point. 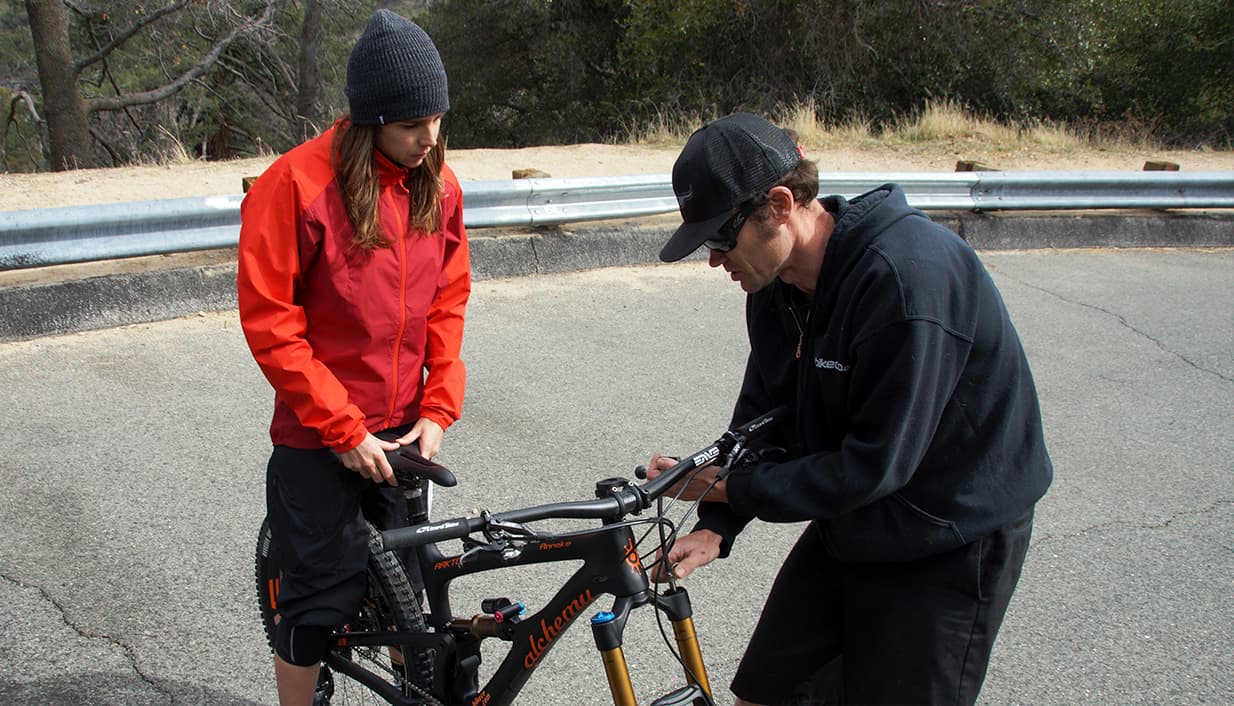 Anneke and Joe tested a handful of different shim stack and air volume damper tunes looking for the best balance of plush and pop. Once Anneke had a favorite damper she did a handful of runs to fine tune rebound and compression controls. Joe noted the setups and Anneke’s performance reports for reference during the race season.

Small change make big differences on setup – particularly for light riders like Anneke. Joe lowers the air pressure 1 psi at a time in the fork for the final dial in using the new Fox digital pump for the most accurate readings.

Testing suspension with professional riders typically involves pushing the controls just past a usable range before resetting. In order to know where the edge is you have to go past it in a controlled environment.

Anneke’s provided precise feedback noting which areas of the trail were positive or negative based on setup changes between runs. Joe helped define which situations required more or less rebound versus compression and how to balance the two damper systems with each other for the ultimate performance. 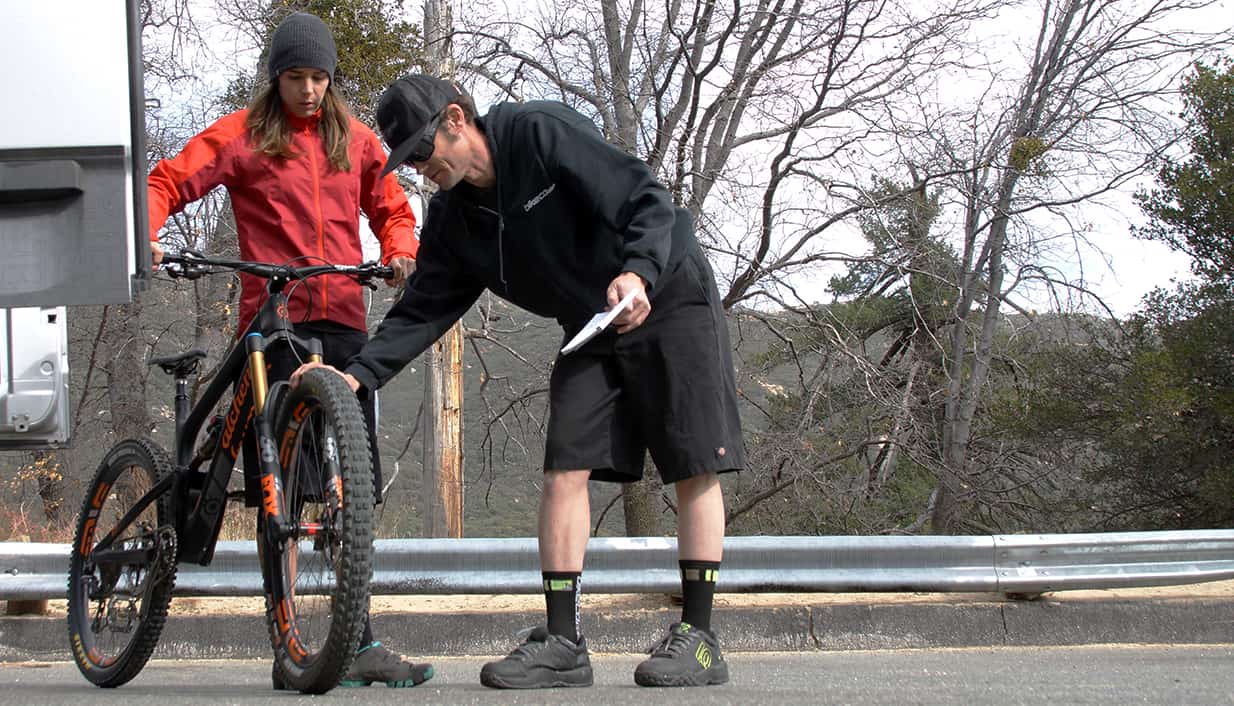 Just like suspension, tire pressure is exceptionally important to a bike’s personality.

Rider’s must balance traction with efficiency while minimizing rim strikes through gnarlier and gnarlier EWS terrain. Anneke’s smooth riding style allows her to run lower tire pressures while still keeping off her Enve carbon hoops. Front tires never broke the 20psi mark while rear tires hovered only slightly above. Weight, riding style and ground speeds are all important when fine tuning tire pressure. Maxxis Exo sidewall tires were used for this test. In more aggressive terrain Double Down casings with lower PSIs will be a go to.

Several pairs of Enve wheels were tested. Rim technologies, spoke patterns (3 cross versus 2 cross) as well as different spoke tensions were evaluated. Anneke rides with impressive ground speeds and aggressive lean angles in corners. However, as a light rider a slightly less aggressive wheel build (spokes, spoking, tensions, etc) provided the most traction and helped dampen some of the trail feedback allowing her to ride more clean, consistent lines.

Understanding how a wheel behaves allows professional riders to spec the right combo on race day. When racing at a World Cup level Joe will typically setup racer’s wheels for each specific course to help minimize flats while maximizing traction. Testing days like this help eliminate the unknown when a rider leaves the gate for an all out race run. 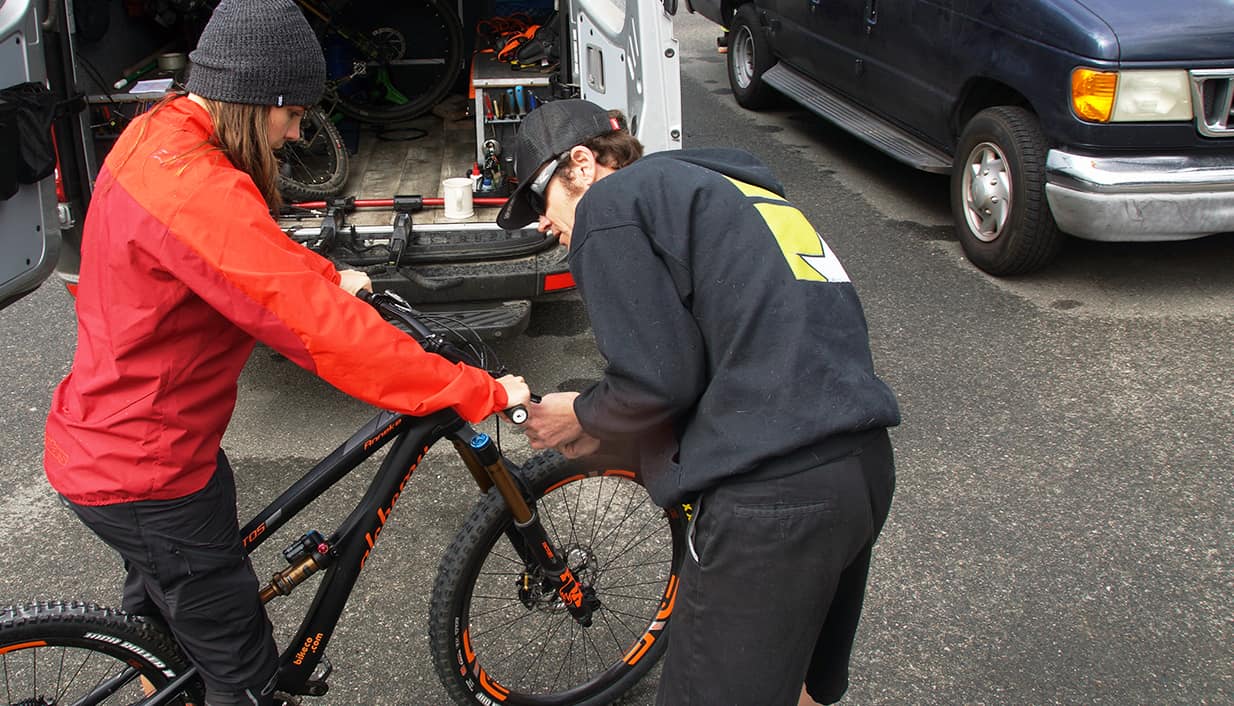 In a world where seconds count fumbling for a shift or worse yet reaching for a brake aren’t options! Stem length, bar width and the location of controls are critical to riding.

Trails like Crestline are excellent to test these adjustments as the variations of terrain and steepness mean you’re very mobile on the bike – if it’s in the wrong spot you’re going to know. 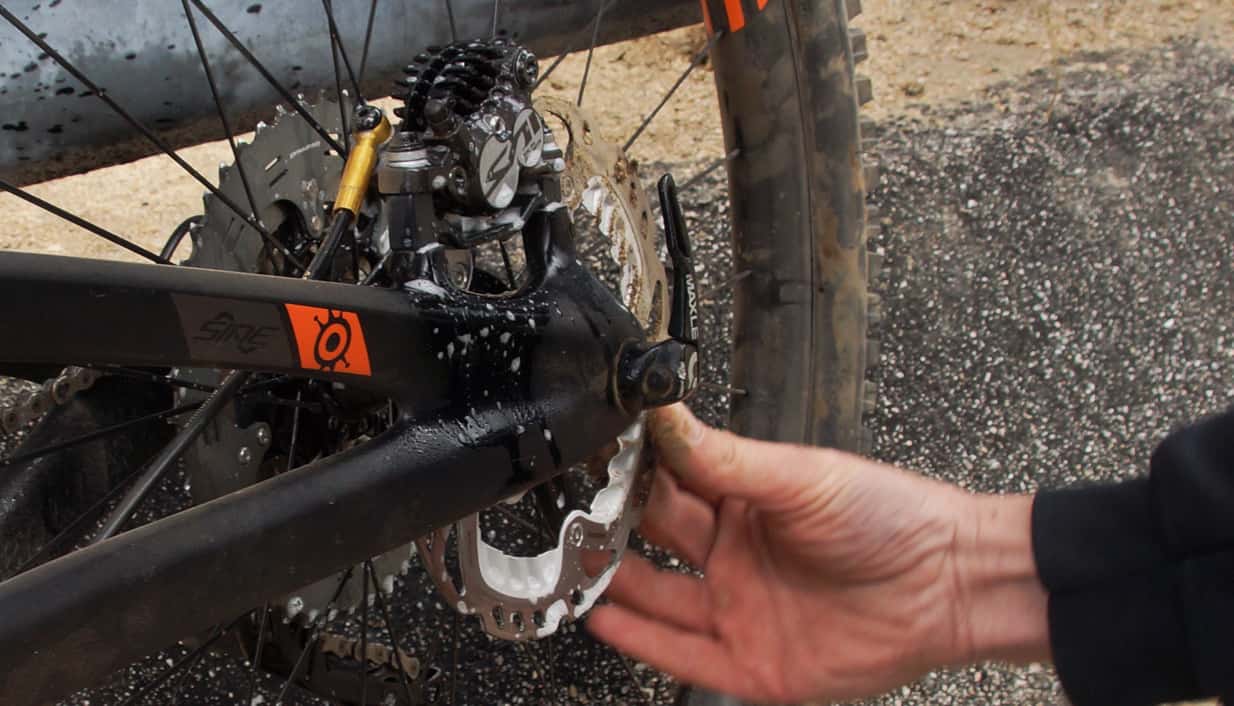 Joe showed a handful of riders some trail side tricks, since their isn’t always a giant Sprint Van around.

Here Joe adds a bit of bite to the rear brake with the dirt sandpaper trick.

Make a quick mud pile (in this case he had windex but water works as well). Avoid dirt with organic (plant) material as it likely has oils that could be an issue.
Resurface the rotor with a thin spread of mud.
Take a quick pedal with the brakes applied to displace the mud and burn off any residue. Ensure that your brake is fully functional, repeat if you need more bite.

This trick works with bedding new product as well as dealing with overheated rotors. It’s a sanity saver in the middle of your all day adventure when you are tired of the squeal and lack of power.

*disclaimer – working with critical areas of your mountain bike can be risky. If you have any trepidation about the performance of your bike and your skillset to correct it bring it to a professional for evaluation and repair. This trick is for functioning brakes low on power due to lack of friction coefficient. As with anything use your head, jamming a brake system with so much of anything that it cannot function is dangerous and ridiculous… test the power and bite before continuing your ride. All that said – I’ve done this countless times and it works.

At the end of the day bikes are super fun…

There were a lot of familiar faces testing in Crestline on Valentines day this year. 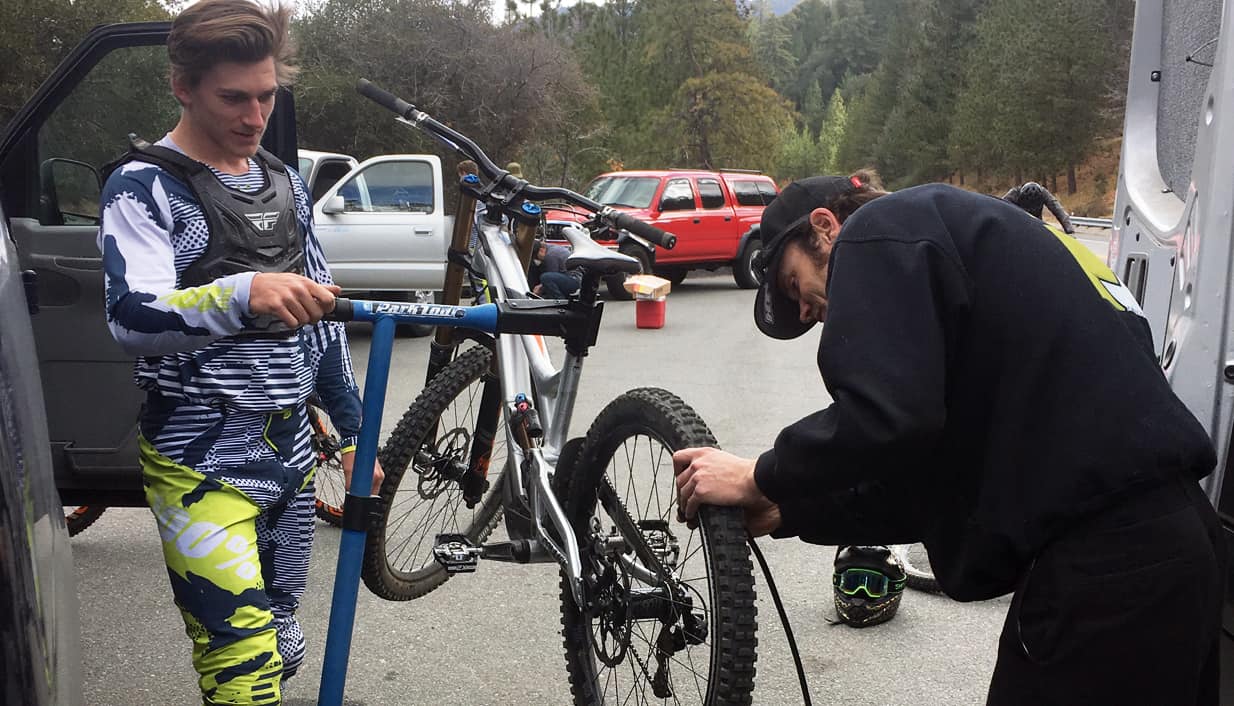 Joe changes a tire on Bruce Klein’s 2018 DH bike. Bruce is looking super fast and ready for the World Cup charge this season. 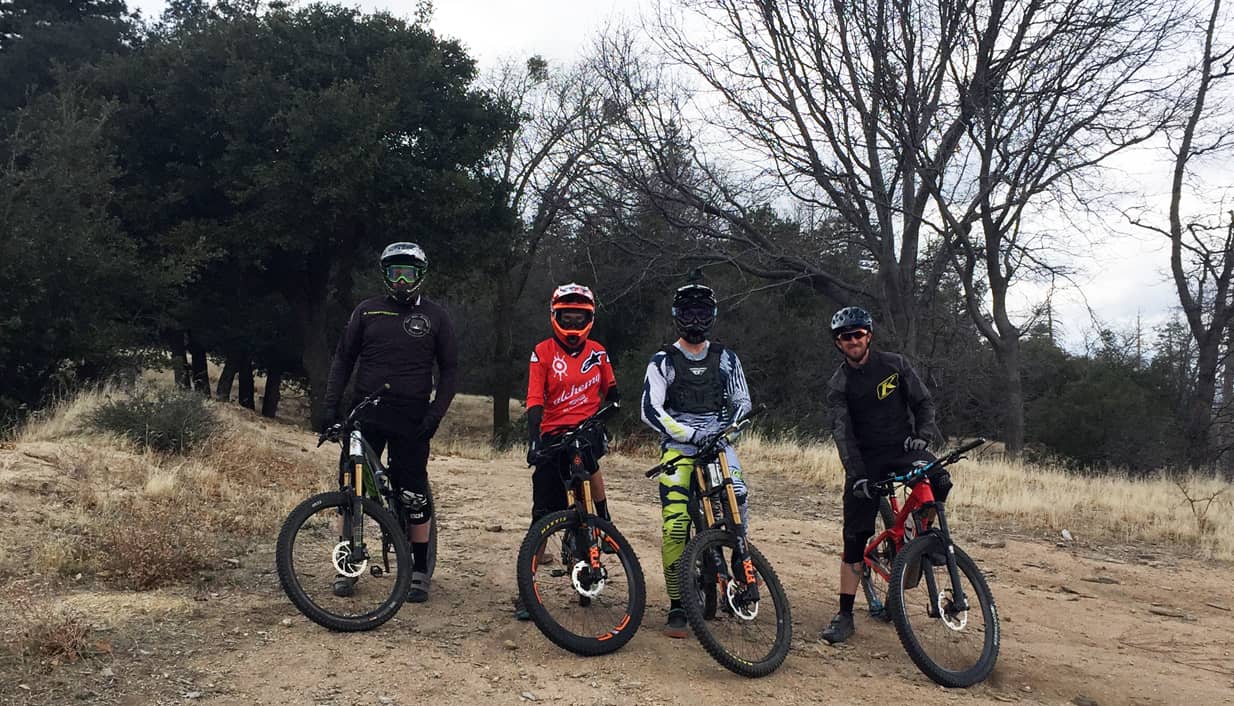 It was a blast to get in a few drops with this crew. So amazing to actually see the speed that pro riders attack the trail. You always learn something from faster riders. The smallest rut was a berm. The sketchy rock sections aren’t so sketchy if you just jump the whole thing (not my program haha). Don’t be rigid on the bike. The list goes on and on.

It’s also really interesting to listen to these pros discuss the small nuances that they are deliberately working on. Even for those who make it look so easy are definitely putting in the work.

I was available to show them, ah, alternative lines if needed… I may have had one or two off trail excursions with variable results haha… 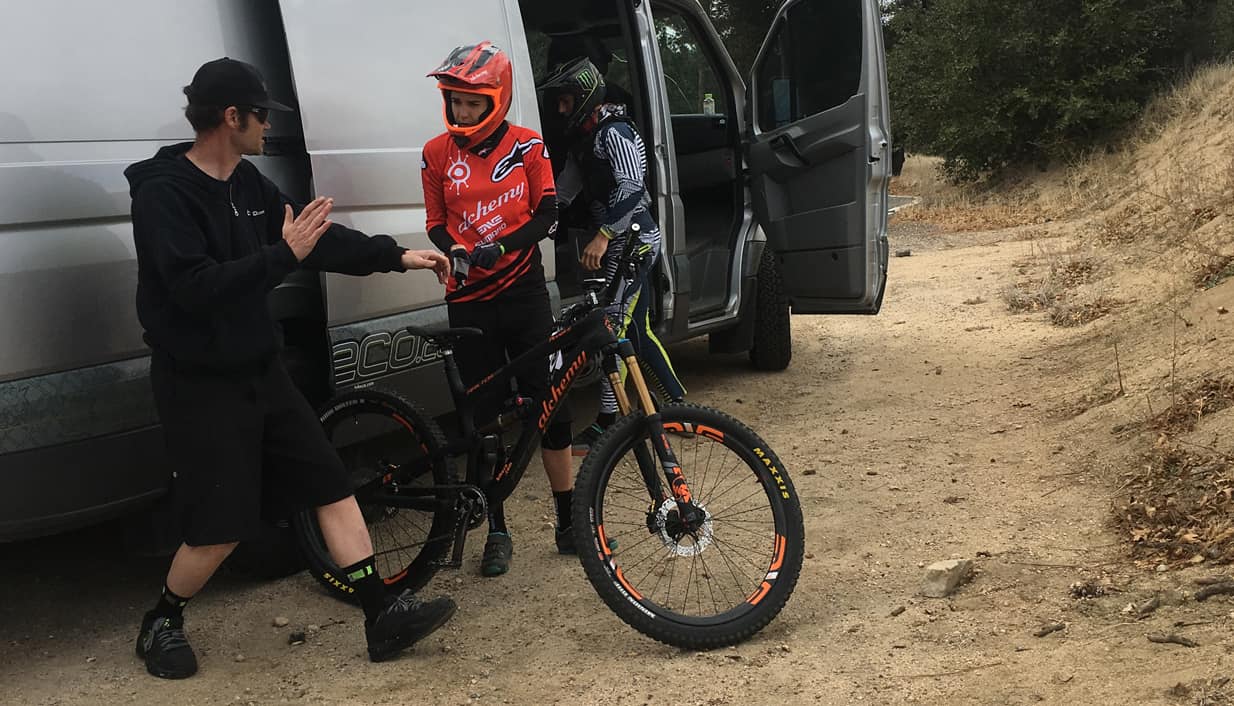 I was just a bit too far to hear what the conversation was about – based on Joe’s body position I think he’s explaining the Karate Kid. When you get out and have adventures with friends and riders there is always something to laugh about.

Thanks for the read – keep an eye on our blog for upcoming race / adventure / lifestyle write ups.