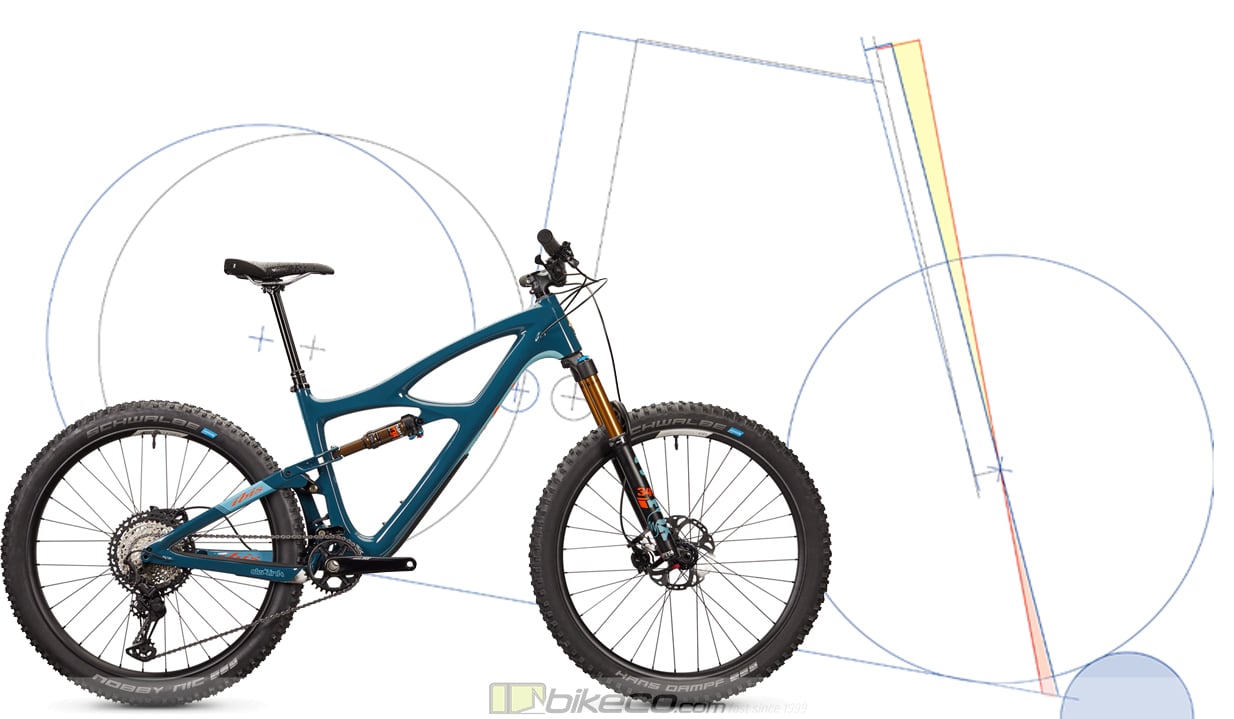 With the Ibis Mojo 4 27.5″ wheel riders have a new trail bike option on the short list for review. Why are experienced riders so excited with the new Mojo 4 and the Yeti SB140? With modern geometry updates designers have been able to shift to smaller travel options without sacrificing as much trail performance. Read: more poppy, more playful, and quicker handling without being sketchy. These bikes have longer reach numbers, but move the rider rearward in regards to center of gravity. They have increased wheel bases but are surprisingly nimble. Let’s look at some geo to explore how.

I like to simplify comparisons. We’re going to compare chainstay, bottom bracket, stack, reach, headtube and wheelbase. Oh. And trail. And a steering reference angle which I’m not sure has a name. OK, maybe it’s not super simple? But keep reading I think it will make sense.

As a reference point, which hopefully won’t create too many dramatic emails for me – sorry if I’m saying your love is a little long in the tooth, we’re going to compare the Mojo 4 to the first Ibis 27.5 the HDR 650b (remember that argument on what the wheel size was gonna be referenced? am I dating myself?)

So we overlay the geometry and see some differences. I like to use the bottom bracket’s horizontal measurement on overlays. It gives a nice “feel” for the bike sizing. 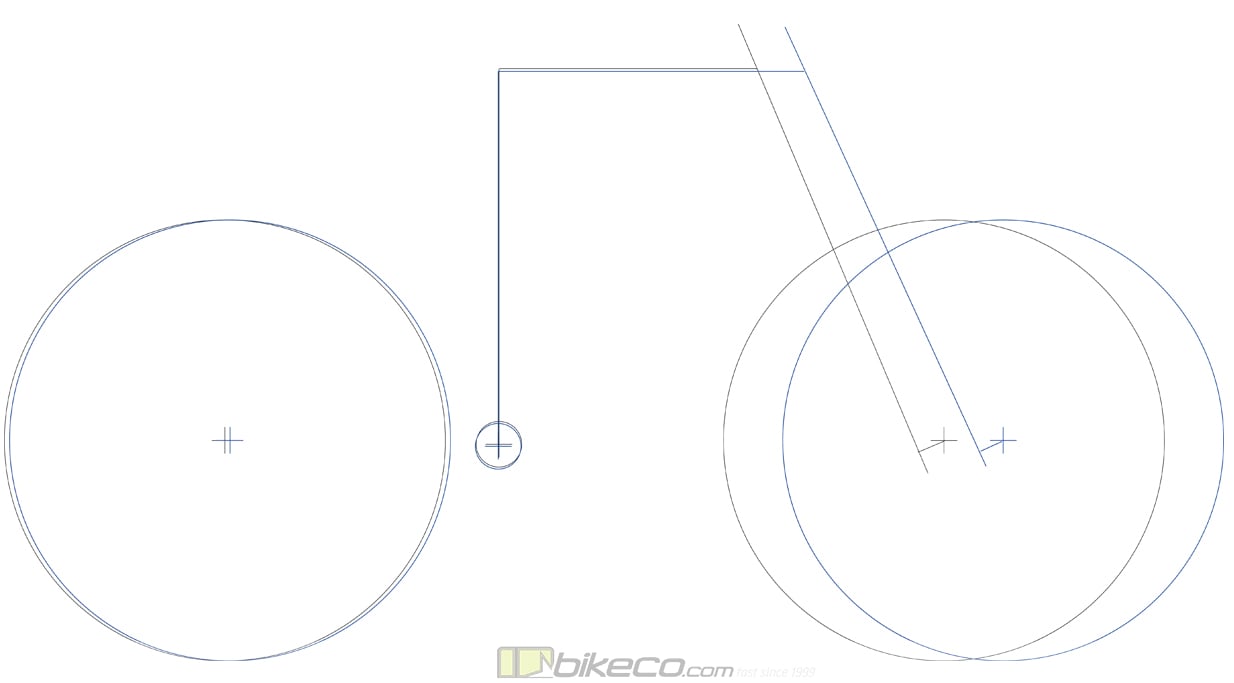 85mm longer wheel base and 76mm longer reach. So, the new Mojo 4 has you moved further forward right? Ah, well, on paper it looks this way, but when you look at it from a riding perspective its different. More on that in a bit.

Remember how sketchy bikes used to be? They’d try to lawn dart you (over the bars) much more than now. They tended to be super twitchy and nervous to steering input.

But now, according to the marketing (which is true), we have these “mid-travel” bikes that confidently ride in burly terrain!? Lets continue looking at the geometry changes over the years that provided that change.

I’m going to group a handful of things together here. Headtube angle, trail, fork offset and typical stem length. Then I want to add another variable or two.

For this I’m using a 75mm stem on the HDR (a fair-ish average. Maybe a touch long but you get the idea). The Mojo 4 is illustrated with a 45mm stem (again, maybe a touch long). Now the bike’s rider reach is closer to a 40mm difference. I’ve also showed the decrease in offset and extended trail lines from the axle centers and headtube angle. 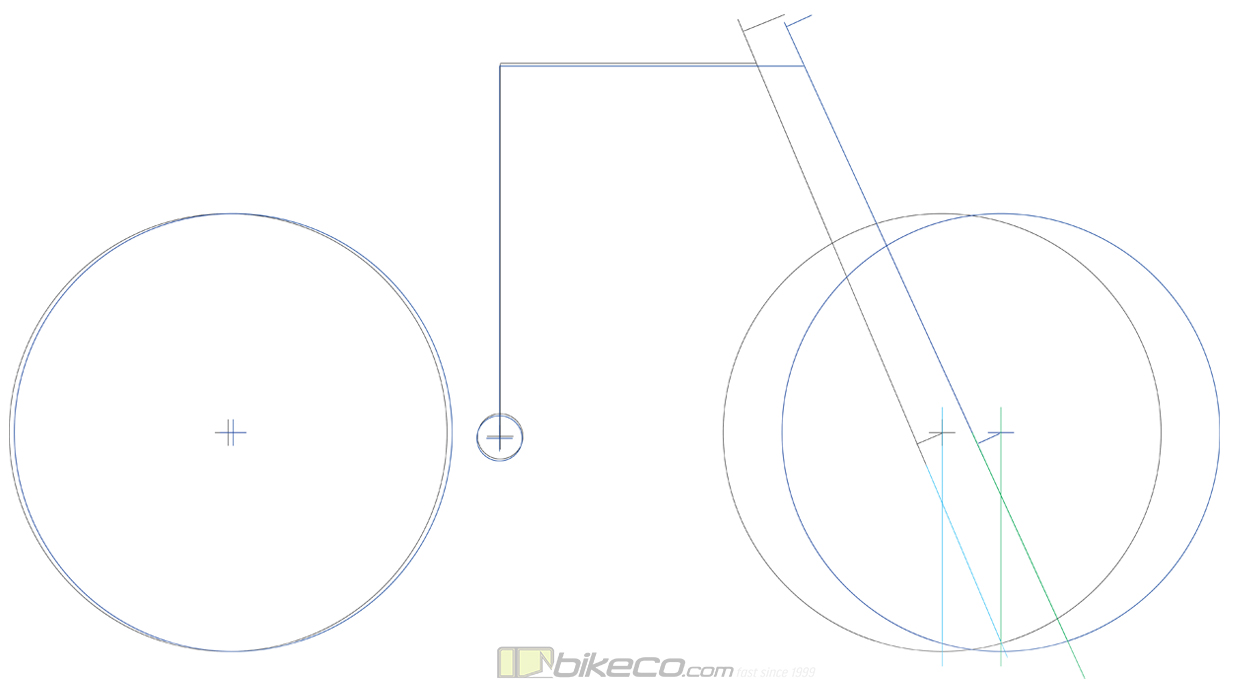 The slacker headtube angle and reduced fork offset of the Mojo 4 produce a 123mm trail measurement. The HDR measured about 100mm as a reference.

Trail effects how the bike behaves particularly in direction changes. So why the increase in trail? Bike balance and wheel flop. We’ve expanded on those a little in other blogs so we’re going to glance over it a bit – know that it’s important though. And it’s a big reason why the slacker headtube angles are happening (and work).

Moving the headtube forward allowed shorter stems to be used. Longer stems had a “tiller” effect on steering. The added length from the steer tube axis meant relatively small steering inputs had large effects on the wheel. Moving to shorter stems bikes became notably more intuitive to ride. It also changes the leverage ratio your body mass can apply to the bars in comparison to the “pivot point” of the front hub center.

Let’s look at the overlay a bit differently. We’re going to align them on the front wheel axis. Like if you were riding and headed towards a feature.

Without getting into a full thesis paper let’s assume that there are two major weight inputs on your bike. The bottom bracket takes most of the load supporting your feet. The handlebar takes the remainder. 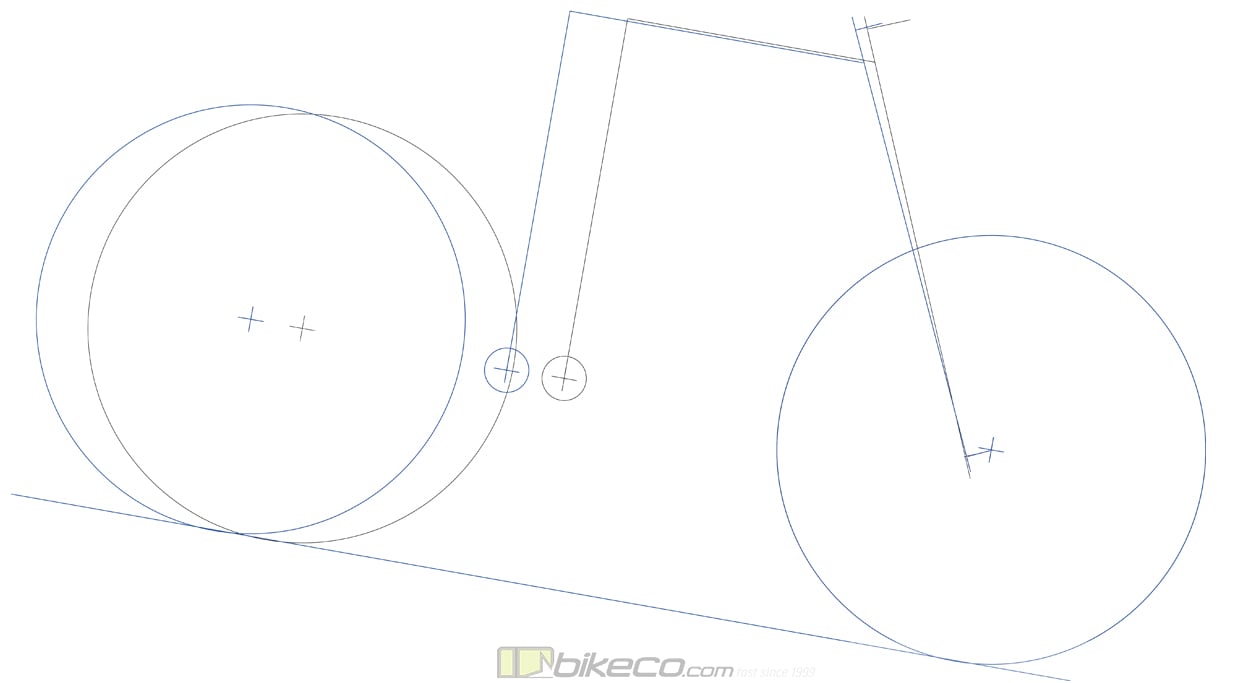 As you can see, longer, slacker bikes move both input points further back from the front hub center. This generally improves the weight balance between the wheels (meaning the bike rides more intuitively). Rides are now more “in” the bike, centered between the wheels rather than more “on” the bike with CG higher and more volatile.

It also illustrates another advantage which is to decrease the potential leverage of your weight on the handlebars. Particularly in rotation of the front wheel. ie, the bike has less mechanical advantage to throw you over the bars! 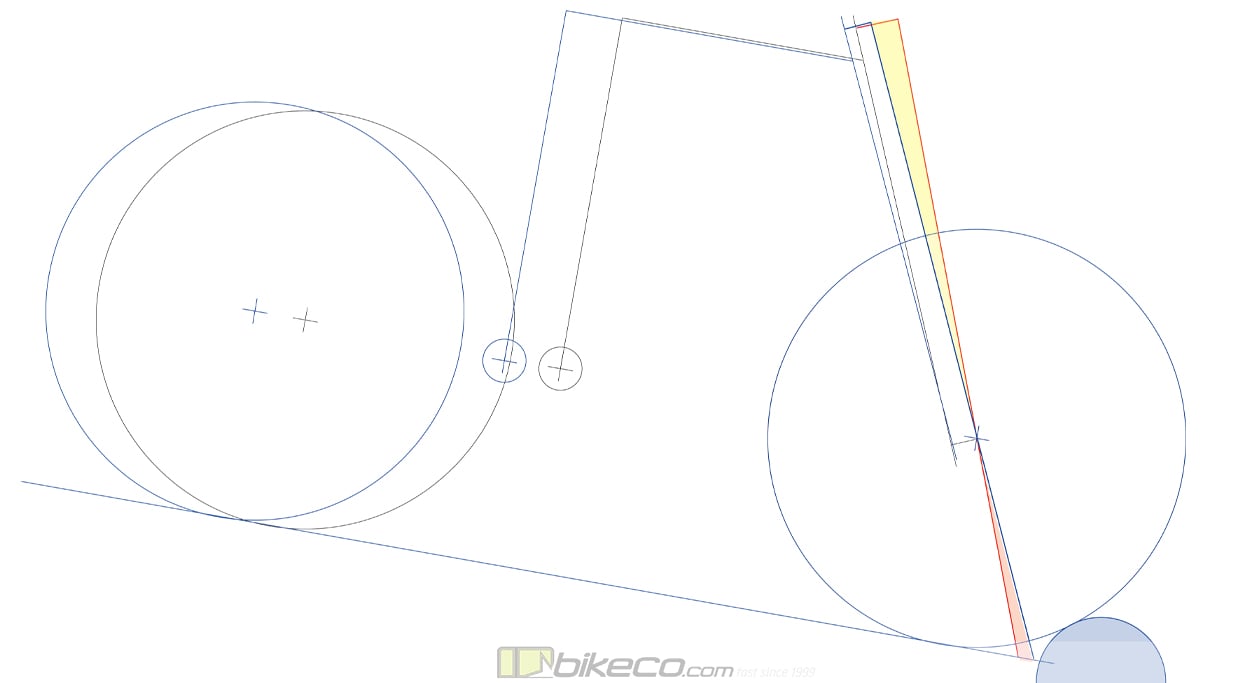 So what’s it mean right? It means lower travel bikes with quality suspension, Ibis DW Linkage or Yeti Switch Infinity, will ride better than they ever have. That “longer and slacker” actually means more balanced and surefooted.

Looking at the suspension develops in the same time period is an eye opener as well. Because, Geo is critical but so is Suspension. (I saw an ad the other day from another brand simply advertising Cutting Edge Geometry without a word to the, ah, not cutting edge suspension)

These shorter travel bikes are benefiting from suspension designers truly get more from less while balancing the modern geo.

Previous bikes in the 130 /140mm rear travel range tended to be nervous creatures at speed. Not so anymore.

Well, welcome to 2020 (errr, 2021 in Fox’s world already!). 2020 has been a bit of a dumpster fire of a year (and where are the damn flying cars?) – but if you’re shopping trail and light enduro bikes you’re in a great plateau of technology.

Bikes like the Ibis Mojo 4 and Yeti SB140 bring the flickability of the 27.5″ wheel and combine it with poppy, fun, quick accelerating mid travel setups. Without the sketchiness many of us remember from previous shorter travel rigs.

Looking for more on the personality of the Mojo 4 or SB140? Chat, email or call our expert staff to learn why your next All Mountain setup might come in at or below 150mm of travel!