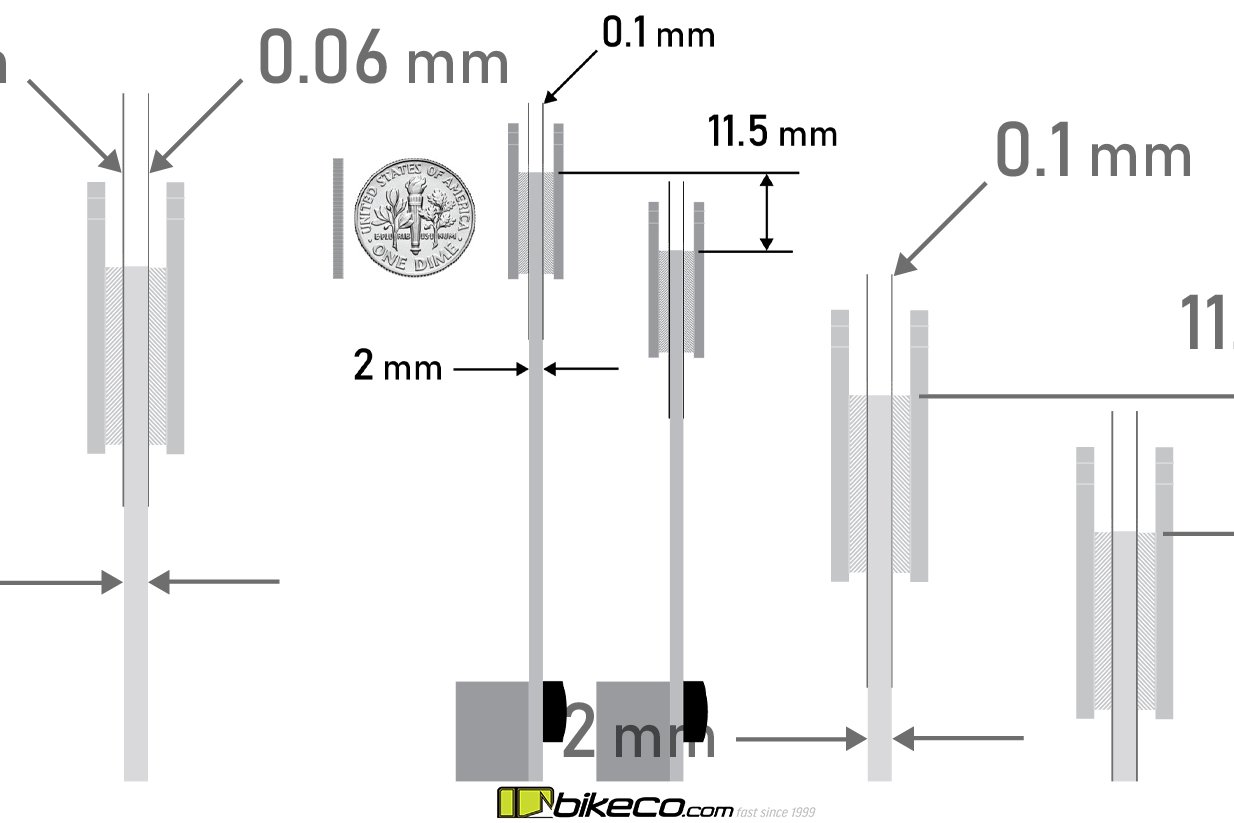 Power, Modulation, Heat Capacity and Personality. Let’s look at some differences between 180 vs 203mm rotors (7″ and 8″).

Increasing the radius of the rotor increases the brake’s leverage ratio.

This will increase the feeling of power even though the piston force as well as brake pad surface are are the same. For instance larger rotors were much more in vogue when brakes lacked power. As hydraulic disk brakes gained power and added pad surface area a similar feel was achievable with smaller diameter rotors.

If power is one side of the coin Modulation is the other. Increasing the rotor diameter decreases modulation, or how the power comes into play. Brake systems with better modulation allow more finite adjustment through the lever. If you’re riding a system known for modulation but feel that the power comes on too quickly you might look at smaller rotors.

Larger rotors provide more heat capacity. There are a couple major factors in this.

One is that the increased power often means you’re on and off the brakes quicker.

The other is the increased circumference provides greater surface area on the rotor. Because the “usable” area of the rotor retains the same height across all the rotor sizes the overall area grows less than one might think. While the circumference increases just over 13% the surface area is only slightly more than 7% larger.

I’m using personality as a bit of a catch all term here. What I want to go over is a couple other common conversation points we see often.

Most notably the “my 8″ brake comes out of adjustment while riding” or similar.

Joe and I spoke the other day about this at length. Every year some of our racers will want to go to 8″ rotors for more power. OK, no issue. BUT, the 8″ rotors will “skiff” off the pads while riding much more than 7″ options. Almost always racers will go back to the smaller rotor when at all possible for a course.

The noise bothers even some of the fastest racers out there – so don’t feel bad if you’re particular about it too! But why does it do it? Handful of reasons. Heat, twist, and MTB brakes are frankly a very precise system.

I went back to the new Magura MT7’s on my personal bike to get some measurements.

With a feeler gauge I measured the gap between brake and rotor on three different areas on my brake. Averaging the measurements came to 0.185mm. For now let’s look at if I had them exactly evenly split ( I didn’t but more on that later) spacing at 0.0925mm per side.

On another note – before you go nuts with a feeler gauge they’re typically oiled to resist rust. Unless you want to foul pads and rotors clean the thing well… 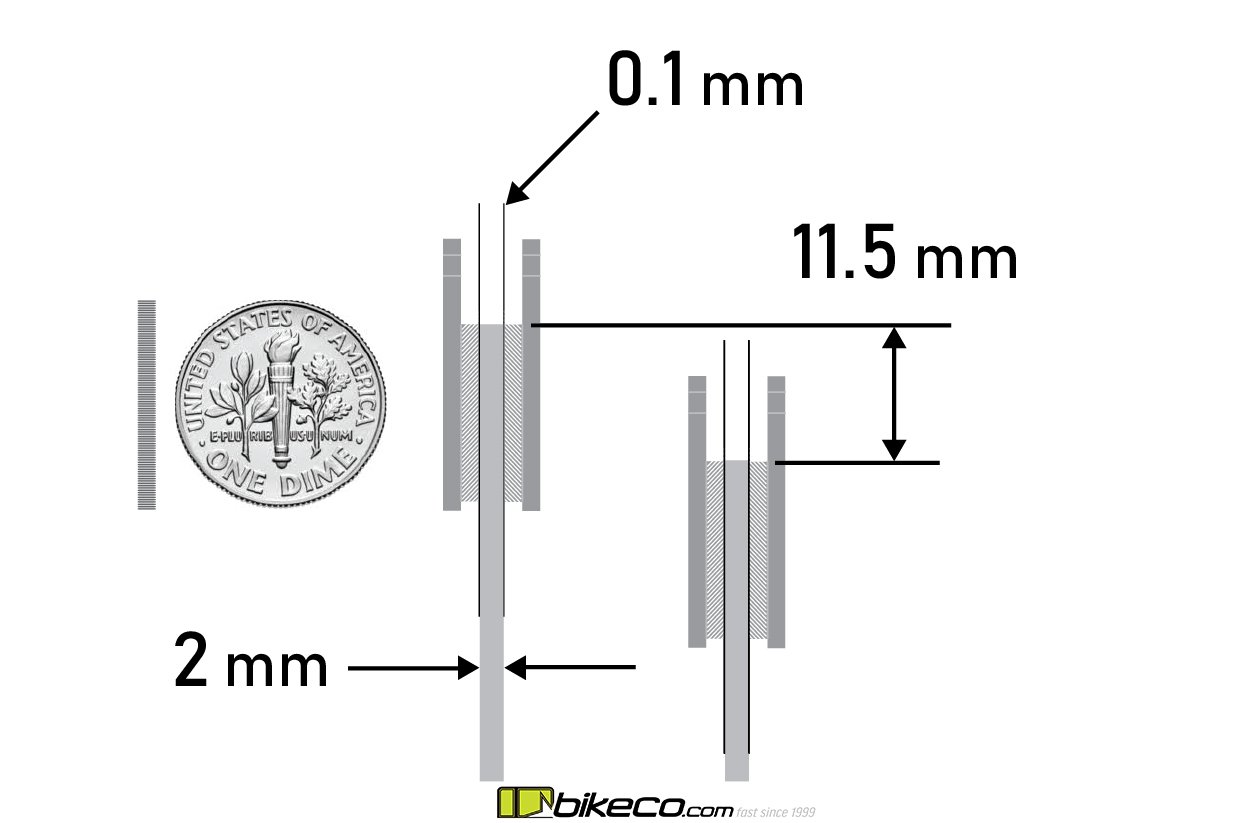 In particular I wanted to review the angular difference between the 180 and 203mm rotors contacting the pads. At 0.0925mm per side I knew it wouldn’t take much. I looked at the measurements from the edge of a 6 bolt interface (that should be quite stiff) to the edge of the rotor. 74.5mm for the larger 203mm rotor and 63mm for the 180mm.

So without getting into a whole series of “why” exactly the larger rotor “skiffs” or “tings” across the pads let’s look at how tight the tolerances really are.

I wanted to have an image for this. Imagine, 2 lines that absolutely look parallel.
But aren’t. OK?
Envision this larger || and I will tell you there’s a 0.014 degree difference…

So we have a triangle with 74.5mm and 0.1mm sides as well as another at 63mm with 0.1mm . Breaking out some trigonometry to determine the angular displacement that contacts the rotors – it’s tight! Obviously you’re talking about 0.1mm in the first place, so its tight. But check this out: for the 180mm rotor a 0.091 degree variance contacts a pad. 203mm rotor its 0.077 degrees. Doesn’t take much to start skimming off that pad…

What’s interesting to me with super small measurements is the percentage of difference. There’s just over a 15% difference in the angular forgiveness before contact. Couple that with the additional 15% more material off the clamped axis (edge of the rotor to edge of rotor bolts) that can be affected by a variety of factors and you have a much bigger possibility for rotor rub. Particularly in burly or fast conditions.

(In fact, one of the more interesting ones I’ve seen was a very strong XC rider with 8″ rotors on a trail bike who could get them to oscillate under acceleration. I almost got creamed by a car sprinting trying to recreate it in the parking lot with him. So it’s etched in my memory!)

Some other points worth pointing out

When working with your brake pad alignment it is important to open the bleed port on your brake levers. I came up with around 0.185mm of gap total between pads and rotors. A butter knife, a practical tool for brakes, measures out between 1.0mm and 2.0mm. So pushing your rotors back for alignment or to replace pads is driving the pistons 5 to 10x further than the levers drive them to pad contact… Just a reminder. Don’t pop bladders messing with pistons.

Back to my brakes. The numbers above were based on a corrected average from measuring my system.

The actual measurements with the feeler gauge were: 0.13 & 0.06, 0.13 & 0.05 as well as 0.13 & 0.06mm. So in practice compared to the white board it takes even less movement to skiff the pads. My brakes don’t make any riding noise and are definitely acceptable to me as far as alignment. Point is, we’re working with very, very small numbers here.

2 piece rotors are designed to cool more efficiently however they can cool off center time to time. I ran Hope M4s for many years with 2 piece rotors. Occasionally the carrier and rotor surface would start tinging after a steep descent or a lot of brake use. I would lightly apply the brakes on a downhill to even the heat back into them and typically they would straighten back out.

Making the best decision on 180 vs 203mm rotors will help you enjoy your bike that much more. Are you looking for maximum power and confidence? Balancing modulation? Simply won’t tolerate noise? No sweat. There’s a setup for you out there!

Still have questions comparing 180 vs 203mm rotors? No problem. Reach out to our expert sales staff to help you dial in the ultimate performance. BikeCo offers the best spec, setup, tune and pricing in MTB.

Check out the best rotors (and get some fresh pads while you’re at it, don’t mangle new rotors with old misshapen pads) or dial in the ultimate set of brakes with our Hope and Magura Visualizers available on our Interactive pages.