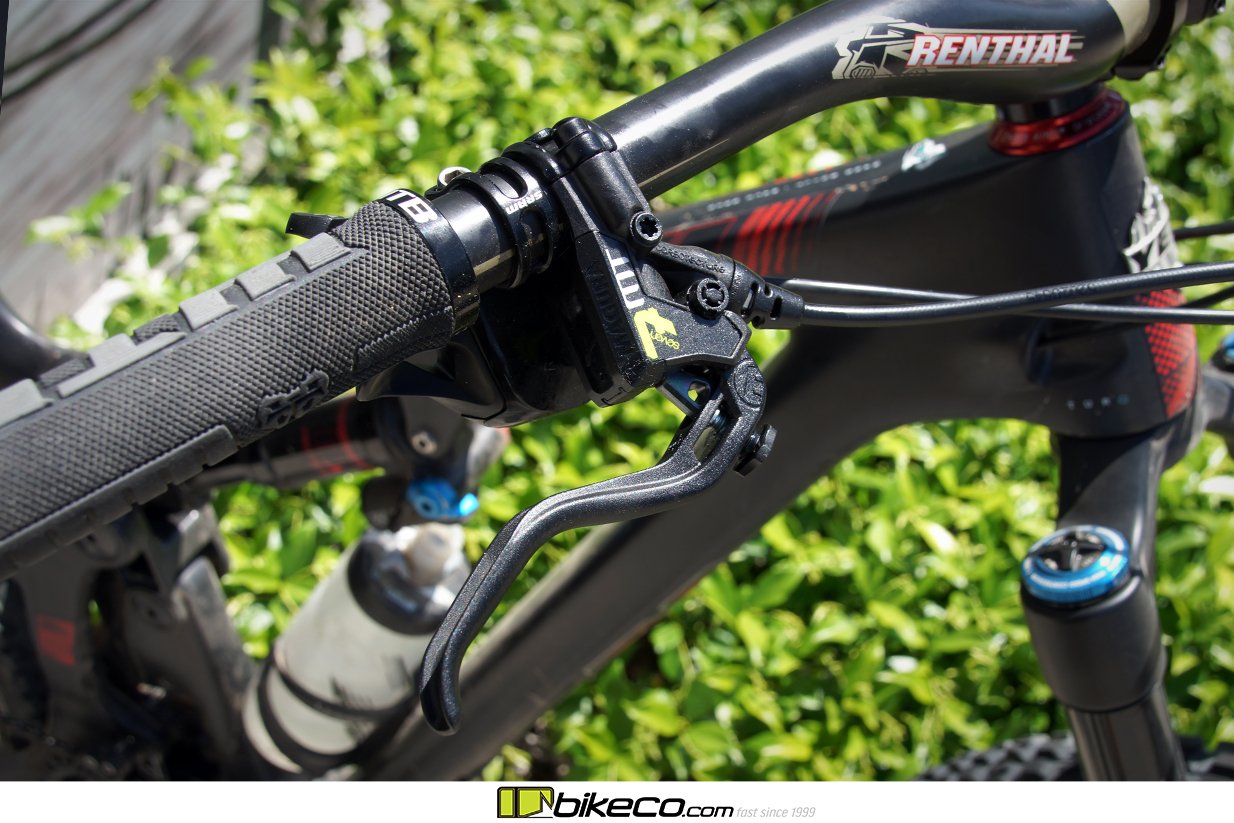 If you’ve followed our blogs you’ve seen a handful of posts on how much I love my Magura MT5 brakes. And I do. But, I had a little extra scratch and wanted to upgrade something. So after living on 5 different bikes the MT5s came off and fresh Magura MT7s went on. Here are some details in a Magura MT7 First Ride Review.

Like the MT5’s the Magura MT7 brakes can be a little finicky during the initial bleed. (Not to worry though, once you get it dialed you pretty much never have to mess with it other than lever bubble bleeds now and then.)

One of the pro tricks is to run the line, remove the pads and bleed the caliper before it’s mounted. This allows you to rotate it around while bleeding the system. The caliper can hide an annoying little pocket of air, it seems to be opposite of the bleed port. With the caliper loose you can rotate the system around letting gravity release the bubble as you syringe bleed the system.

It took me two tries on the rear brake to get the caliper bubble out. I had reinstalled the brake pads, tossed a wheel in and didn’t have good lever feel. After checking the lever for a clean bleed, it was, I knew it was the caliper. Wheel and pads out, syringe bleed, watched for the caliper bubble to draw out and bam. Done. Not a big deal, but if you don’t know what you’re looking for it can be very frustrating. (for full disclosure on why this may have happened in the rear read on – it’s later…)

In fact none of this is a knock on the product – if anything it’s to bring up “there’s a solution”. Which makes everyone happier right? I wonder about how many “issues” are really due to installation errors both by home mechanics (I get it) and shops (there’s a huge difference in shops that work with product at this level. Magura brakes are a top tier product and some shops simply don’t see it often). If BikeCo’s marketing guy can do it (and our mechanics can do it in their sleep) it’s not bad.

Once I had the lever feel I expected I burned in the brakes. I used fresh rotors as well so burning in took a few stops. Continue until you have bite. I burn them in until I can lock each wheel up in the parking lot. 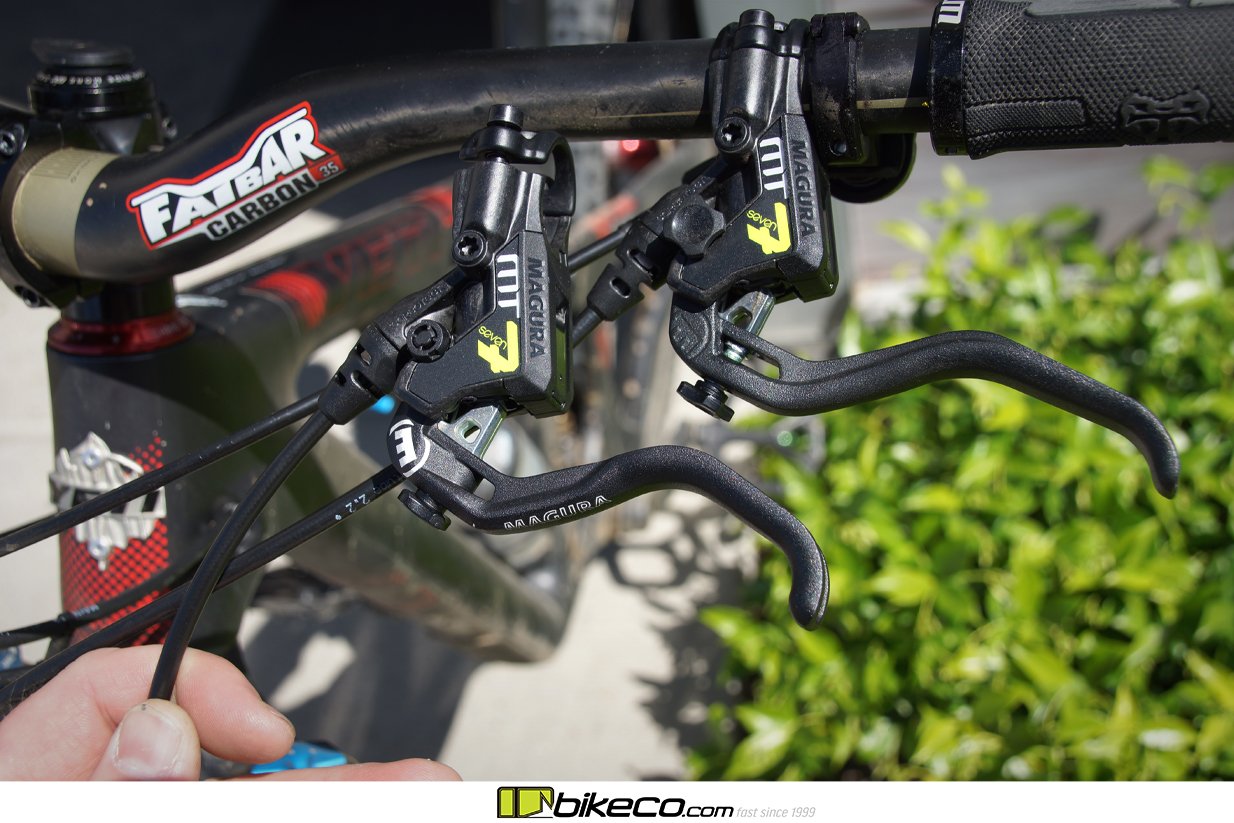 I setup my MT7s with the longer brake lever. While called a two finger lever, for me it’s simply a one finger lever mounted further inboard. I prefer the longer lever as it increases the amount of “throw” as the brakes engage. This creates an even greater feeling of modulation, which is one of the best characteristics of the Magura lineup.

Lever feel is quite personal. The shorter one finger lever tends to be more popular, particularly with riders coming off Shimano brakes. It allows more power to come on quicker. Riders also like the one finger shape for finger retention.

On the lever to the right you see the BAT adjuster on the body. I’ve kept this in the middle of its adjustability as a starting point. Moving the bite point doesn’t change full power, just where the brake begins to bite in the lever throw.

You will also note the tool-less adjuster for lever throw. This is a nice feature to quickly dial in position. They’re not there to adjust per drop. Nor are they there to spin when you’re nervous. On my first ride I had the left lever coming in during the descent. I’ve ridden / sold / setup tons of MT7 brakes. A small minority have slightly loose tolerances and might rotate a bit. A solid suggestion from Kent at Magura’s service was to use window silicone to add some friction to the thread interface.

Being me, I set the levers where I wanted and used green loctite… Green loctite is a bearing retainer fluid meaning it’s slippery enough to get into crevices but it’s aggressive. I don’t plan on spinning it – because I might not be able to haha… Not saying I would go this route off the bat if you’re not sure – but it’s an option! 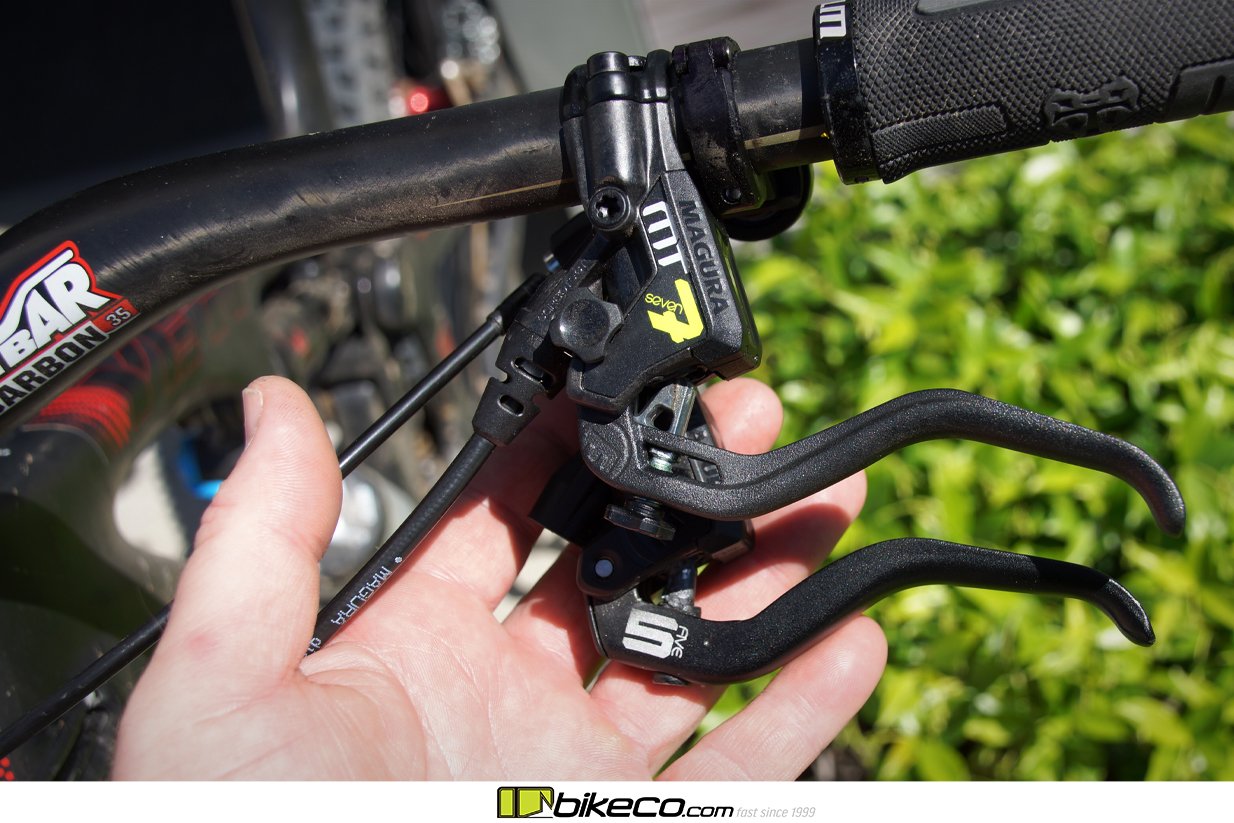 Back to the lever feel.

Here are my previous MT5 levers. You see the small additional angle at the end of the lever on the MT7? That is super noticeable on trail. In the parking lot I could kind of notice it. Once bouncing down trail I was blown away at the small change making such a big difference. I feel like my hands are locked into position. Not that I EVER ONCE had an issue with the MT5 levers, but I do feel like the MT7 levers are nicer.

I went with Magura HC 180mm rotors front and rear. Which, on the Yeti SB130 with a Fox 36 fork means for the first time in ages I don’t have any brake adapters. No real advantage there I just thought it was funny.

The Magura brakes operate best with the slightly thicker Magura rotors. I used to run the Hayes V7 rotors with good results, but with the launch of the HC series I’ve gone back to Magura.

HC rotors are slightly heavier with better heat tolerance than the lighter SL offering. I never noticed a real performance issue with the SL rotors but the greater number of cutouts created a harmonic I didn’t like. I’m not sure if this is because I’m a heavier rider or finicky or both. If you know what I mean about the harmonic with your rotors (almost all SRAM rotors do it too) check out the HC option.

The MT7s are advertised as having more power than the 4 piston MT5s. So far I would agree 100%. Not so much power to be overwhelming, which is how I personally feel Shimano brakes feel, but more power longer.

I haven’t had them in super steep situations yet but I’m sure they’re up to the challenge. The MT7s power comes on predictably and smoothly entering corners. The additional power compared to the MT5s allows you to get on and off the brakes quicker. How this is done without compromising Magura’s unbeatable modulation is beyond me.

I’m struggling to put down more awesome characteristics of the MT7s that I haven’t already said about the MT5s frankly. That, and I have an SEO word max to consider I guess…

Plenty of power. Few situations have me grabbing full brake for any length of time. The fact that I’m not throwing levers to my bars constantly also improves my riding confidence.

Long and Short – if you’re looking for a bit more power head towards the MT7s. If you’re on a budget you’re never going wrong with the Magura MT5s.

Some Vanity and Explanation… 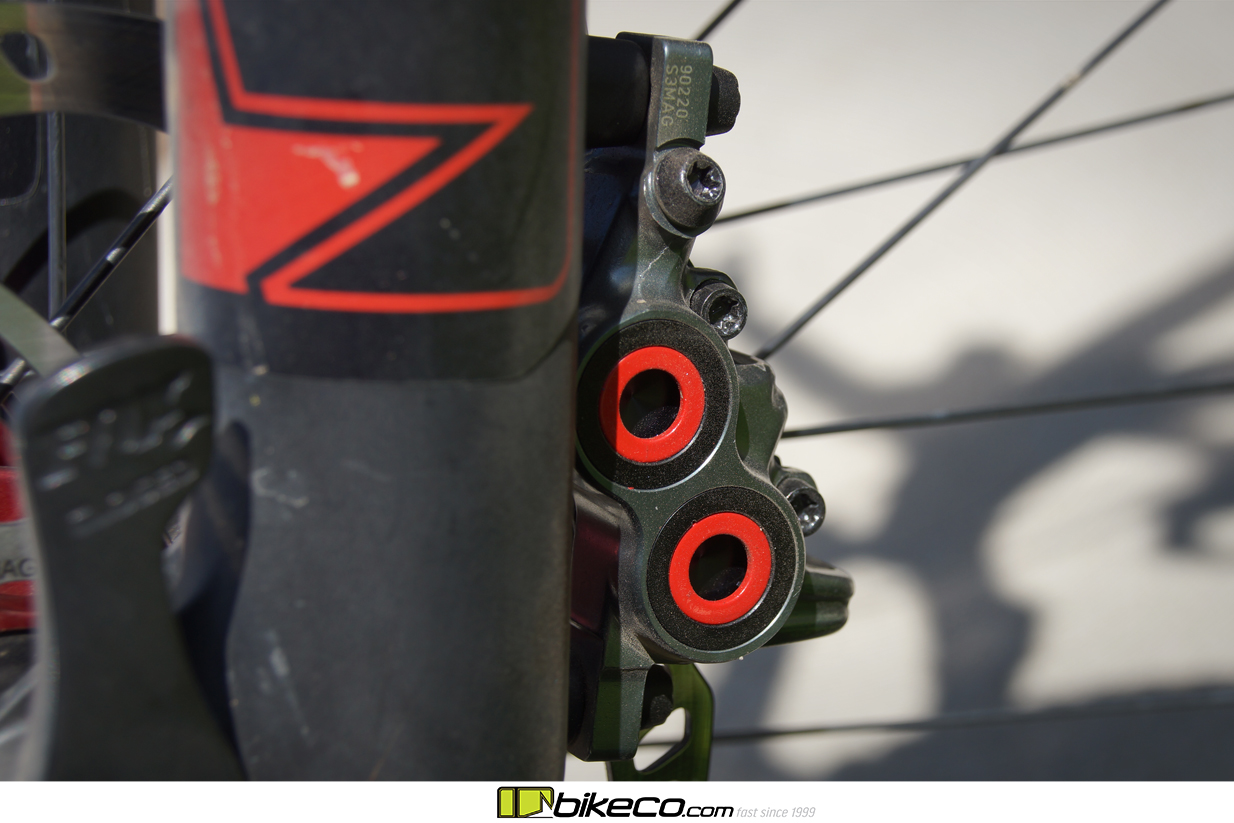 The last step when I installed the new MT7 brakes was moving over the red caliper “pucks” (can’t think of a better word here). You can purchase extra of these pucks. Joe and I busted out the rattle can to get a red to match the custom graphics. I’ll admit to some vanity here – but can’t argue the look… Plus red makes everything faster right?

My SB130 was longer than the last bike that the MT5s were on. So I installed a new line when I built it. It’s an internal route, and I didn’t feel like making a “mess”, so I took the lever (in the previous photo) and the caliper off the line to replace them. Good chance this is where I ended up with my bubble… But the technique described is good to bleed brakes.

On a final note: my Magura experience has been amazing since 2015. The MT5s really didn’t come off the bike due to performance I just wanted to treat myself. (and based on how many bikes I’ve seen in here for brakes lately maybe something is in the air?) In fact the MT5s are going onto a good friend’s bike to replace his 2 piston XTs that came on his X01 build…

So end of the line on the MT5’s – A couple sets of brake pads, a rotor or two kept me dialed in. Consistent lever bubble bleeds create a good feel and I never had to full flush the Magura Royal Blood.

Looking forward to the same, and even a little bit more from the upgraded MT7s.

Wondering about cockpit and brake setup? Check out our Setting Up MTB Cockpit Controls or take a look at all of our Tips & Tricks: Setup Tips Articles

Contact our sales team for more details and for special pricing to get you on the best brake setup for your riding. Check out the Magura Brake Lineup Here