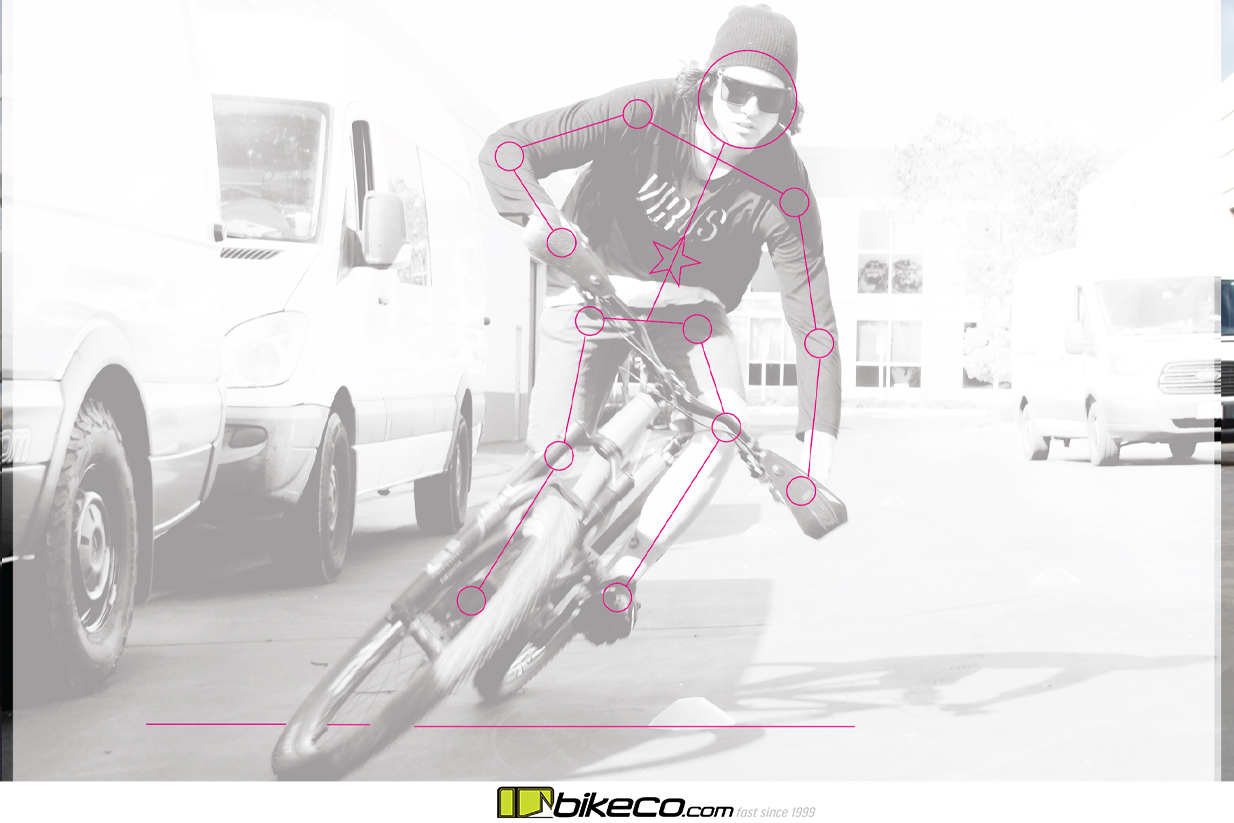 Some quick backstory – Kevin came by a few days ago to help with a cockpit setup article for our friends at [R]evolution Magazine. To emphasize his points he gave me a cornering lesson. (Kevin coaches racers as well as average riders these days) Understanding the cornering concept really unlocked the bike setup points – which you can check out here.

First Kevin illustrated some poor technique through a cone drill leaning his body far beyond the bike’s lean angle. 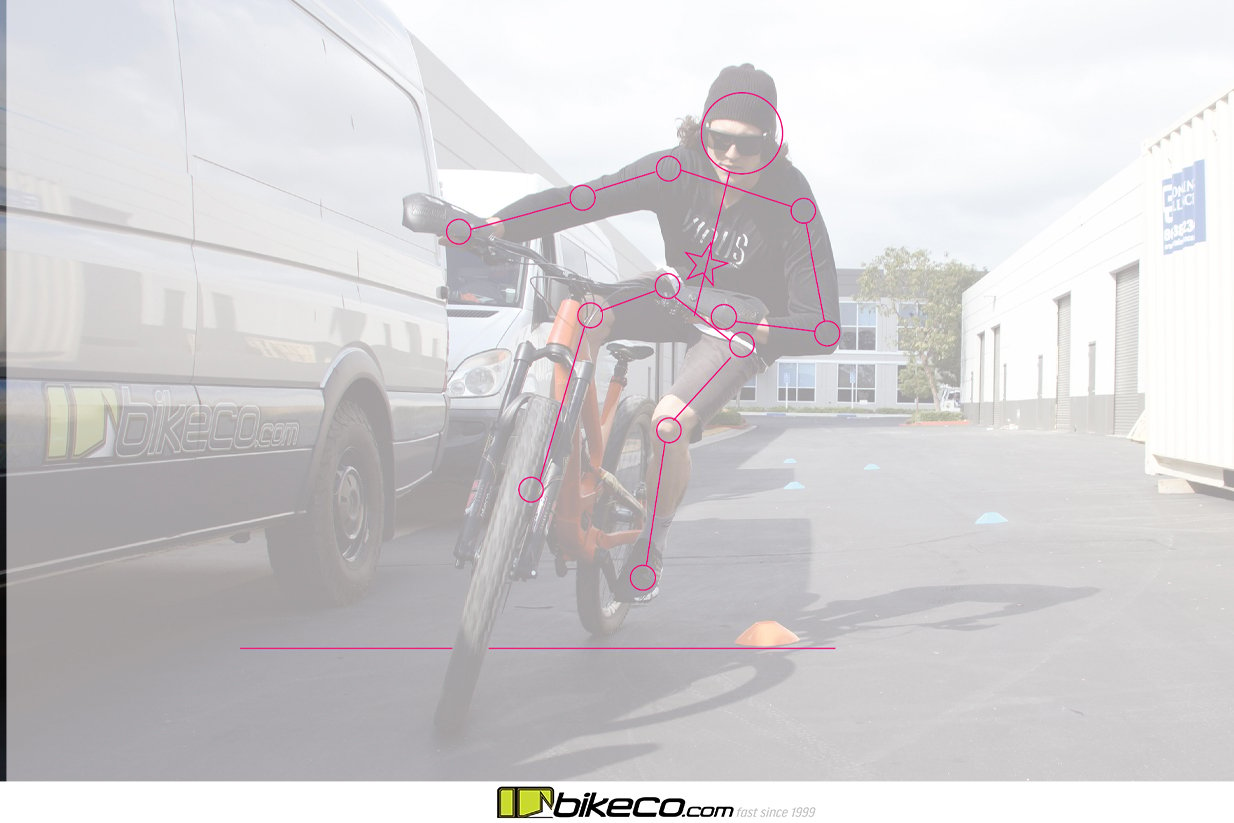 “I see this a lot. Riders who have adopted too much lean angle getting way off the bike. The problem is this makes you a passenger, not a pilot. You’re way out of position to use your contact points.”

OK – contact points are your pedals and grips. In theory, and we’re going to get into how much “theory” there is in this stuff – but in theory you three contact points in a corner. Each hand and your outside, or weighted, foot.

For really new riders it is the best technique to drop your outside pedal in a turn and weight the bike through it. Dropping the outside pedal allows more lean angle as the inside pedal is out of the way while providing the best weight control. This is opposite to motorcycle theory where you weight the inside peg. In fact I often find myself going back to MTB cornering on my dual sport and it doesn’t work so well!

Kevin went back and took a couple clean runs through the cone drill and came back to review the pics.

“You see here how I’ve got the bike angled into the turn? The bike is leaning more than my body. That’s important.

“First, setup wise I have to be able to get into this position. If my bars are too long I’m forced to lean too much into the turn. But the real advantage is keeping my weight, and power, close to perpendicular with the ground.

“Staying close to perpendicular gives me the most control of the bike. If the bike loses traction and slides I’m on top of it and I slide with it. If I lean more, say equal with the bike, my weight starts wanting to ‘help’ the bike push further out if it loses traction. That’s no good. When you lean way off your weight wants to launch the bike up and out if it slides. And we ride in dirt, which slides.

“So think about the corner, is it flat, is it a berm – you want to have your body pushing perpendicular. If I’m riding on the side of a steep berm my body will be nearly horizontal to the “ground” but perpendicular to the face the bike is riding.”

Could It Be That Easy?

I thought back to my riding. I tend to ride a handful of different “styles”, er style might be the wrong word but you know what I mean. When I ride the fastest though I’m definitely using that technique. And when I say “fastest” I do mean the quickest I ride but since I avoid crashing at nearly any cost “fastest” really equates to “the most in control”. Diving the bike in and staying on top of it has a tremendous feeling of control.

Kevin continued, “One of the deals is it’s hard to see exactly how you corner. I work on that a lot when coaching. Helping riders understand what they’re doing and when so they can improve. Setting up a cone drill on your street with an iPhone helps – having someone watch how you apply it on trail is important. Another thing to remember ,the setup goal is 50-50 weight distribution on your wheels. These techniques and setup all work together to have you comfortable ripping down trail.”

Well I focused on these techniques over the past few rides. Definitely quicker. Certainly more in control. They also allow you to dive into a turn later and at a higher speed. Fun stuff. Which isn’t what I have to say about a handful of test rides before that…

It would surprise you how many 20 year clients we have. That’s way longer than even I’ve been around BikeCo! Recently a pair of BikeCo lifers decided to upgrade their rides. During the spec conversations I started hearing that Kathy wasn’t very comfortable leaning a bike over. We spoke about some setup options to help with this confidence but it really stuck with me. Can you ride without leaning very much?

Kind of. If you like being terrified. All the time.

I did one descent for three rides trying not to lean into turns. (I couldn’t bring myself to blow up an entire ride doing it…) Well, my scientific conclusion was it’s horrifying. And hard to do.

So the physics of a bike turning are pretty complex. OK, super complex. Like complex enough that many, many bikes are designed without the rider entered in the equation. Makes being a pro test rider emphasis on the test eh?

Now I’ve been going down the bike turning rabbit hole for two full evenings after work. Partly to explain why not leaning is so horrifying and why Kevin’s “less lean” is better than more. Let’s start with why you lean a bike in a turn – abridged and simplified.

Friction keeps your tires sticking to the ground. Newton’s first law of motion says things go straight until something pushes them not straight. When you turn the wheel the front wheel’s motion is no longer going “straight” (it’s motion is now split between forward and to the side) and therefor has “slowed” down in the former “straight” line compared to your body, bike, rear wheel, etc. That leads to your weight wanting to pass the front tire, fold the steering and launch you high side over the bike. To hell with that. I work to avoid going over the bars at all costs. It hurts, it adds height to a fall, and did I mention it hurts…

So initiating a lean with your steering input helps counter the weight location and eliminates that “fling you past your bike” feeling. Now Kevin has shown we can get that lean from the bike without hanging off of it like a MotoGP rider while maximizing control in the dirt. How can that be?

I Gave Up On The Math

Typically I love doing the math on these types of things. Because you can argue a lot of strange stuff – but math when applied correctly is pretty much binding. But on this one I finally gave up on the math.

Let’s look at some of the concepts and why I think the math would make sense – if – I had nothing but time or needed to write a PHd thesis or something.

Most of the “why a bicycle or motorcycle turns” stuff online is a bit soft on the actual applicable physics of a moment. Meaning my motorcycle, my mountain bike, and my beach cruiser don’t have the same applications.

Friction. The calculations factor in friction of the tires to the ground. Well in MTB we have extremely variable friction. Whether over riding the corner into a drift (awesome) or simply riding into sand that pushes you wide there are variables.

And pushing you wide? Oh well that changes the corner radius. Which is the denominator, or divisor in math, in Mass* Velocity squared/Radius. Oh, and velocity? It’s tough to change that in MTB. Hitting your brakes mid corner will stand a bike up and do strange things. And there’s no throttle.

OK no more math. But over the years I’ve found some things just have to pass an eye test.

So I laid out a couple concepts to stare at. Now I would need a grant to try to expand this into a formal “this is why”, and I doubt that’s happening this week. 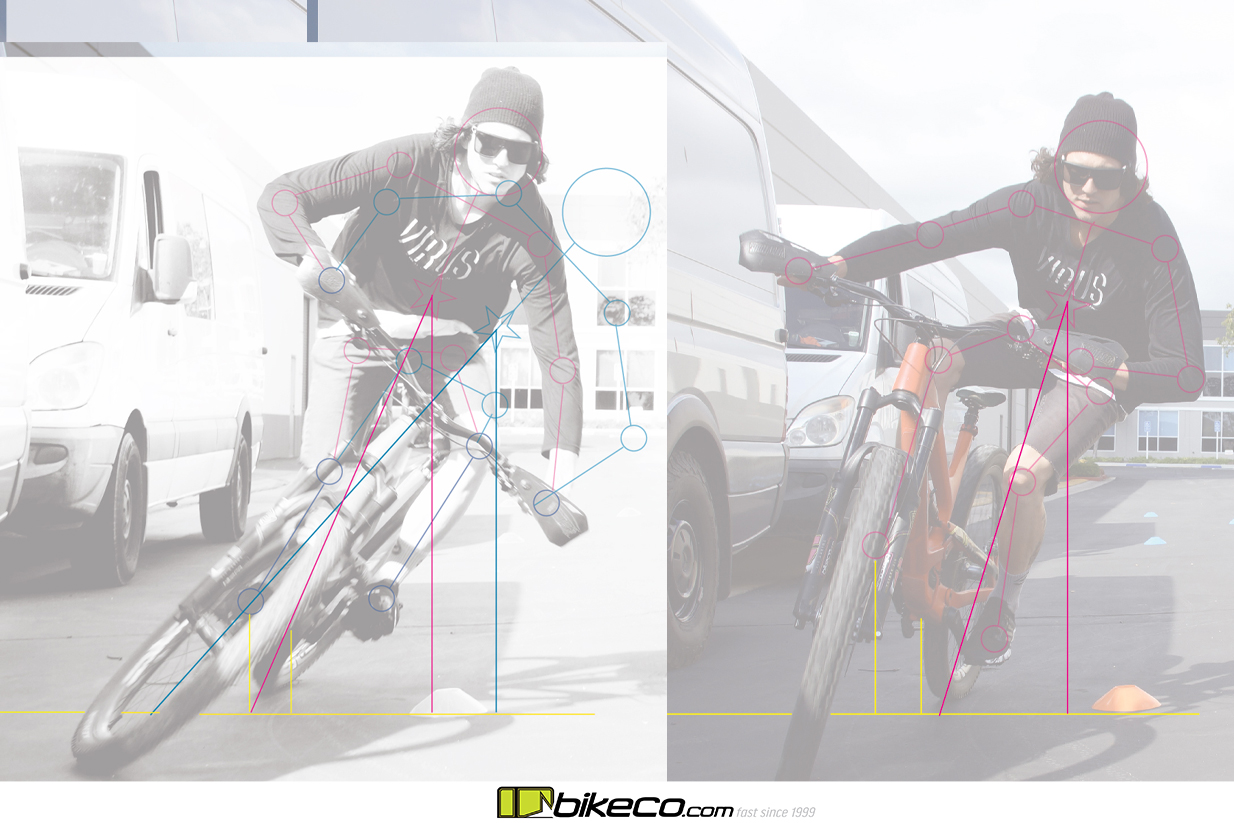 So in the left photo Kevin’s at an ideal position. The blue shows leaning equal with the bike and the right leaning more than the bike.

Now I keep being drawn back to the extension from the chest angle to the horizontal. In the ideal position it intersects very close to the pedal vertical. Maybe happenstance – but I feel like there’s definitely something going on between that correlation and the ability to power and control your bike.

Kevin’s method of maintaining nearly a 90 degree angle with the ground provides great control of your contact points. It’s much more fun to drift a bike at speed when you’re along for an even ride rather than having to desperately correct to stay upright.

Leaning the bike counters the centripetal forces trying to launch you past the front wheel if you simply turn your bars.

Most importantly – having more confidence in your cornering is more fun. More fun is important. There are plenty of people in your life that think you don’t need any more fun. But BikeCo and Kevin Aiello think you deserve more fun…

See you on the trails.

Back to Tips & Tricks