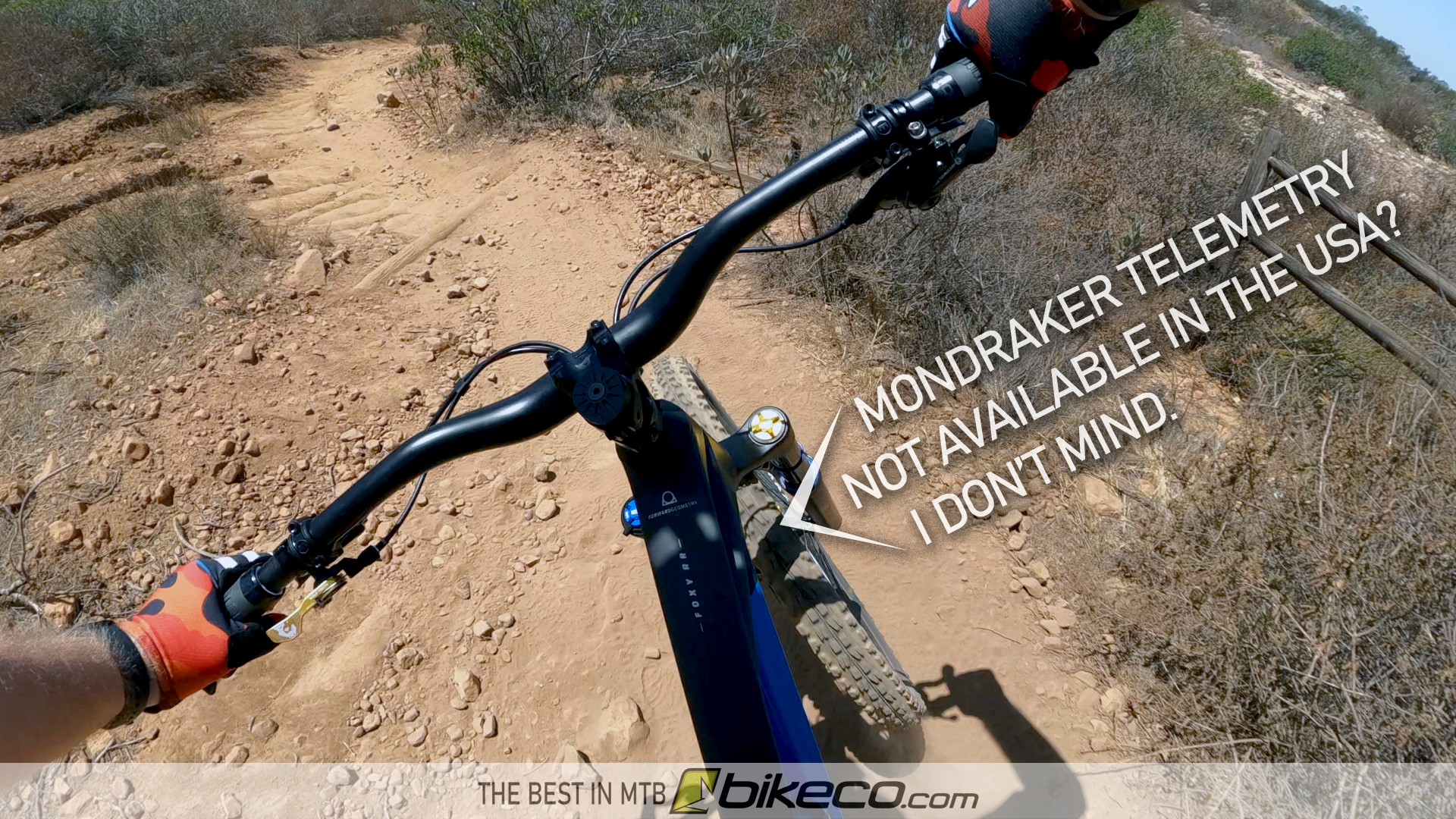 Mondraker MIND Telemetry Unavailable in the US

A question my, rather small, set in our ways, group of riding friends asked was what I thought about the Mondraker MIND Telemetry.
Well, for whatever reason: App licensing? Patent limitations? Something else I don’t know about? I dunno. But, however you cut it: MIND telemetry is not available on the US bikes.
And it doesn’t bother me.
Don’t get me wrong, I enjoy data. It’s interesting and you can look at it a lot of ways. But, like an old boss of mine was apt to say: figures don’t lie, but liars can figure…

So, app driven suspension suggestions (turn this dial put in this PSI) even based on a good deal of telemetry input, well it’s just not 100% credible to me. (funniest one was a GPS setting that rated like smoothness – What? How? Why?)
Telemetry sheets are graphs with spurts of data points. Usually spikes or arcs and all kinds of shapes. Any app that’s telling you “twist this 2 clicks and that 1 click and do this with the PSI” is using an algorithm of what it sees to make those suggestions.
Does data help a pro racer with a competent suspension tech? Yup. But a large part of that relationship is talking about “this is what I felt when I was riding best”, “this might have led me to be in the wrong position during ‘x’” and “ya, I just fluffed the lines there and the data is outlier.”
Working with a person who can chat about all the minutia has huge dividends and that’s one of the focal points of our bike suspension setup, delivery, and follow up process here at BikeCo.com
(which is SUPER important on the heavier eMTB rigs – if your eMTB isn’t setup right, well, sorry. You’re gonna chase that for a while and it’s going to compromise your ride quality)

CAN YOU SEE THE INPUT?

Riding footage adds an interesting dynamic to fine tune setup (notice the racers tend to practice with them?).
Being able to watch and see: “ya, that’s a proper line within my skill set and I think the fork should have rode taller” versus, “whoops, ya, I smashed through the travel because of rider error there – glad the bike was there at all!”

On my Mondraker FOXY demo I came across an example I think would have confused an app and led down the wrong rabbit hole.
The demo (which lacked the low and high speed compression controls on the FOXY Carbon RR Ohlins or the RAZE Fox Factory suspension) was quick to turn down, or dive into corner entry.
However, it felt like it would “stall” for lack of a better term when I tried to drive it to full lean angle around the apex.
So what was going on? What were my options? And, getting to the point of this blurb – does an app have any chance at this or did I need a certain amount of data and review with a competent person? (bet you know which way I’m going)
Joe and I chatted about it over lunch after the ride. (I have access to Joe Binatena one of the most sought after suspension people in MTB – and you know, if you buy a bike, suspension or a Pro Tune from The Bike Company so do you through our team…)
Mid to fast Bermed corners. Suspension PSI setup properly. Tire pressure OK, possibly a little high (I hate flats, and I hate flats more on test rides…)
I generally don’t trail brake through corners (in fact the demo bike had brakes I hated so I was braking super early to insure it would slow down…) so the bike was sitting at a proper attitude going into the turns.
If you brake too late or into a corner it creates a “nose down” attitude. This creates issues as the bike runs deeper into travel giving up some traction and having a more “harsh” feel – maybe harsh isn’t the right word, but a faster or more aggressive push back since it’s running at a deeper PSI?
Not to toot my own horn, but it might take a bit of experience to feel the bike “hang” during the lean. Of course, now that you know it can be a thing you’re ahead of where I was then right??
It might be more likely that a rider would note the bike felt slow rotating around the corner and wanted to push (understeer) to the outside of the corner.
Those complaints are probably going to lead to softer tires and possibly a softer suspension right? Help keep more grip to get around the corner?
Except, in my case that’s not what was happening. Those changes would just make the bike squirmy (too low of tire pressure) and slow out of pocketed corners as the suspension would use too much travel compromising momentum and steer input.
Would it have killed me to go the wrong direction with those setup mods? Probably not.
BUT! If I came back after the ride with lower pressures and still had the complaint and went well, if SOME was a good idea MORE must be better… I’m quickly off into the weeds of suspension setup and probably frustrated with my purchase.
Here’s where a live, thinking person with access to a team (am I describing BikeCo? Of course I am) has a huge advantage. If I had lowered the pressure and spoke with my contact and was like “WHOA, didn’t help” we’re probably looking at other setup options.
Because what was the fix? More ramp, more compression. The bike wasn’t exactly “pushing” or over-steering as much as it was unable to maintain the tighter early apex cornering line which then set me wider at exit.
Going frame by frame with the riding footage it seemed like the fork was setting in a touch deep into the travel into the corner apex / pocket, but then kind of slowly settling down a touch deeper as well. Probably the split second of the bike compressing (and slowing) drove my body slightly ahead in the bike which then added to more of front end settling in.
Watching the video the trail showed the bike SHOULD have load through the suspension at that point, but it was setting in (as you would expect) then kind of slowly continuing to load.
It made sense to have the suspension loaded into the corners, so I wouldn’t want to increase rebound as that would decrease overall grip and ride quality bouncing me around.
Air pressure was an option – however the bike wasn’t sitting super deep on the first section of the lean or cornering. So again, increasing air pressure would decrease grip and could induce skip.
So where were the answers?
Increasing Ramp Rate: make each MM of the suspension past sag take a little bit more load to compress it.
Increasing Low Speed Compression: similar to the ramp rate adjustment increasing compression slows the forks progression through the travel giving it more support.
Perhaps a small increase to High Speed Compression: Adding high speed compression in small increments can be helpful too.
Back to my point on having my phone send me a post ride SMS (not sure if that’s a function any have but it seems funny to say) to make all those ideal changes?
Yaaaa, I don’t think that’s gonna happen? So, no telemetry? I don’t MIND.
Want to read more about my first ride on the Mondraker FOXY? Check out this review of the demo and how an imperfect demo ride (not uncommon) showed me what I loved in my next bike!
Shop #thebestinMTB from Mondraker, Ibis and Yeti!