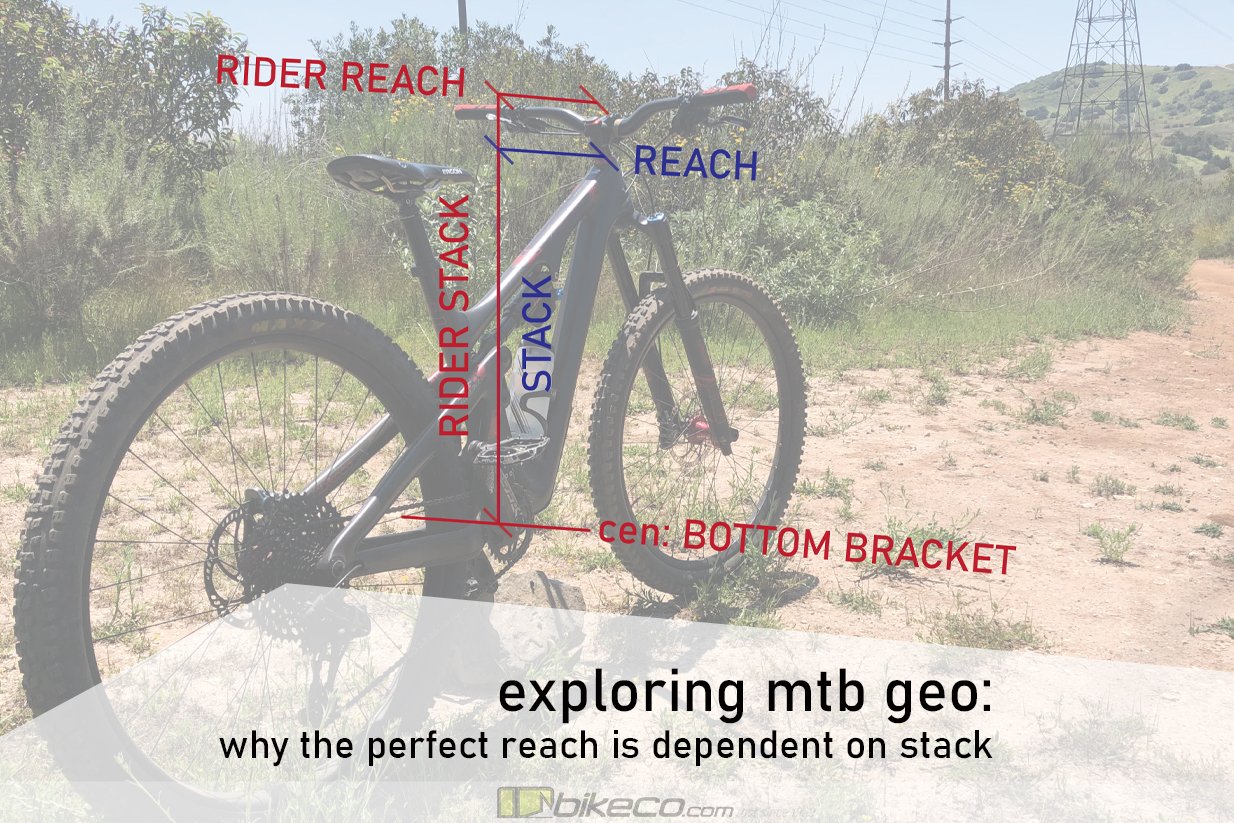 We often talk about a bike’s cutting edge geometry. But what makes an ideal MTB geo? Well, if you’re listening to some of the “influencers” it’s reach, reach and reach… Except it’s not nearly that simple. Exploring MTB Geometry you’ll see that reach is far more malleable than you might have thought. I’d like to take a few posts and explore some of the various balancing acts that go on to produce a great fitting MTB geo.

Teaser: As we examine how variable some geo numbers can become I believe it will shed light on how critical suspension design and application really are.

In order to keep things readable, and the SEO robots happy we’re going to break this up. To understand why reach isn’t the “be all and end all” let’s examine variables that muddy the waters.

When you look at an MTB geo chart you’re going to see a lot of data. Most of it is exceptionally dependent on each other in order to “make sense”. 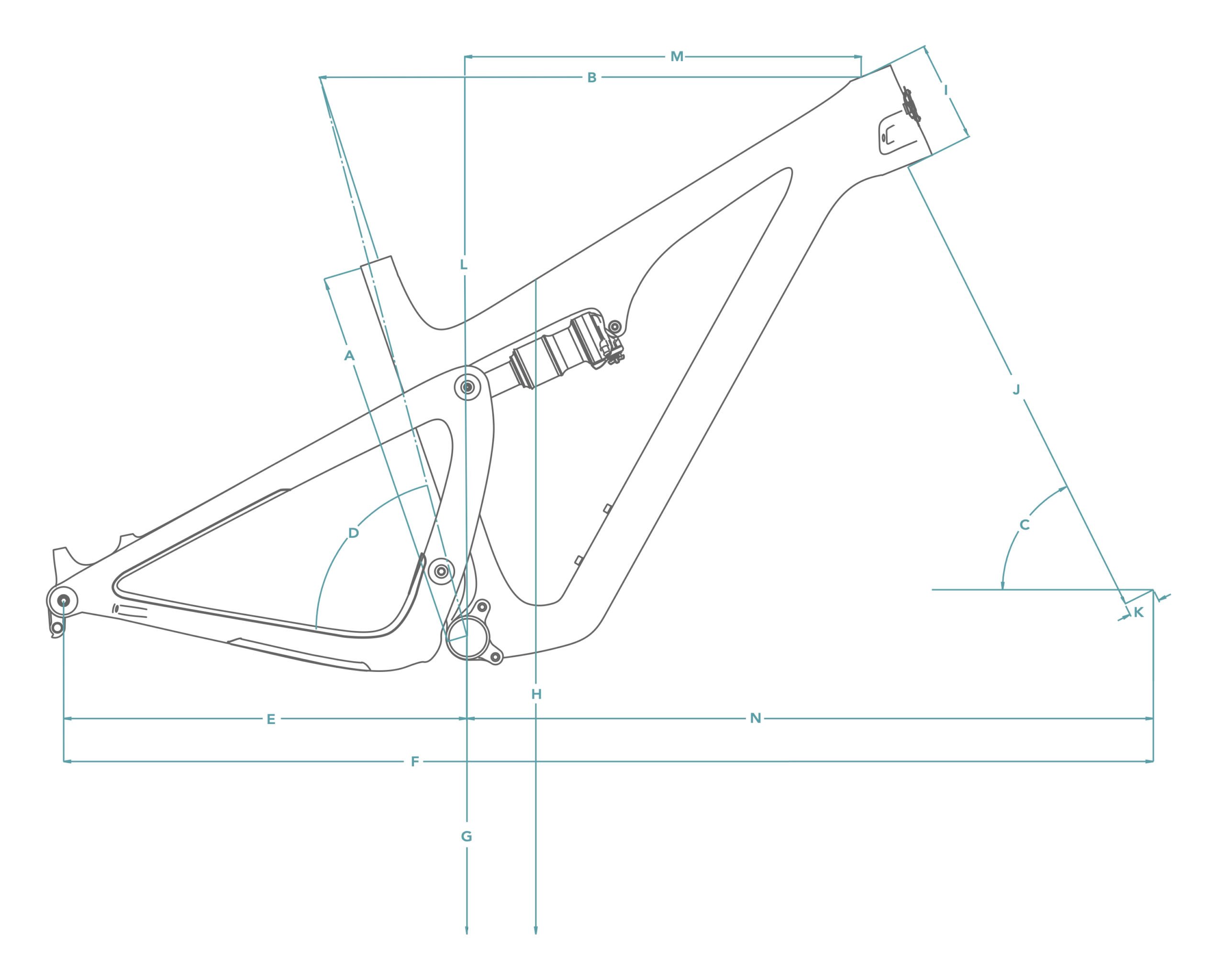 That’s where Reach (M) and Stack (L) came into play several years ago. They were designed to simplify the concept a bit.

Reach is the distance horizontally between center of bottom bracket and the center point of the headtube.

Stack is the vertical measurement between center of BB and center point of headtube.

Somehow lost along the way: these aren’t “independent” dimensions.

Take a look at your cockpit. It’s likely that you’re running 5-20mm of stem spacers. And 20-40mm rise bars. The taller cockpit gives a rider greater support and leverage particularly in steep terrain. If you’re like me, the taller cockpit keeps you in a position you can pedal the bike too (back issues).

Due to the headtube angle the taller you make the cockpit the further rearward it moves the controls. This shortens the reach.

I’m going to use my Large SB130 Lunch Ride’s listed geo for an example (partly as I’m really interested in why this, the “longest” bike I’ve owned handles more nimbly than anything I’ve had in my quiver… much more to come on that).

Using the headtube angle 65.5, every 10mm spacer or bar rise increase raises stack 9.1mm. You also shorten the reach 4.15mm for every 10mm increase. (link to Calculator.net’s Triangle Calculation for this opens in new window)

Well I run my cockpit pretty tall on this bike. 9.5mm of headset height, 20mm of stem spacer, then add half of the height of the stem 20.6mm, finally the 40mm bar rise (let’s leave out sweep for this). 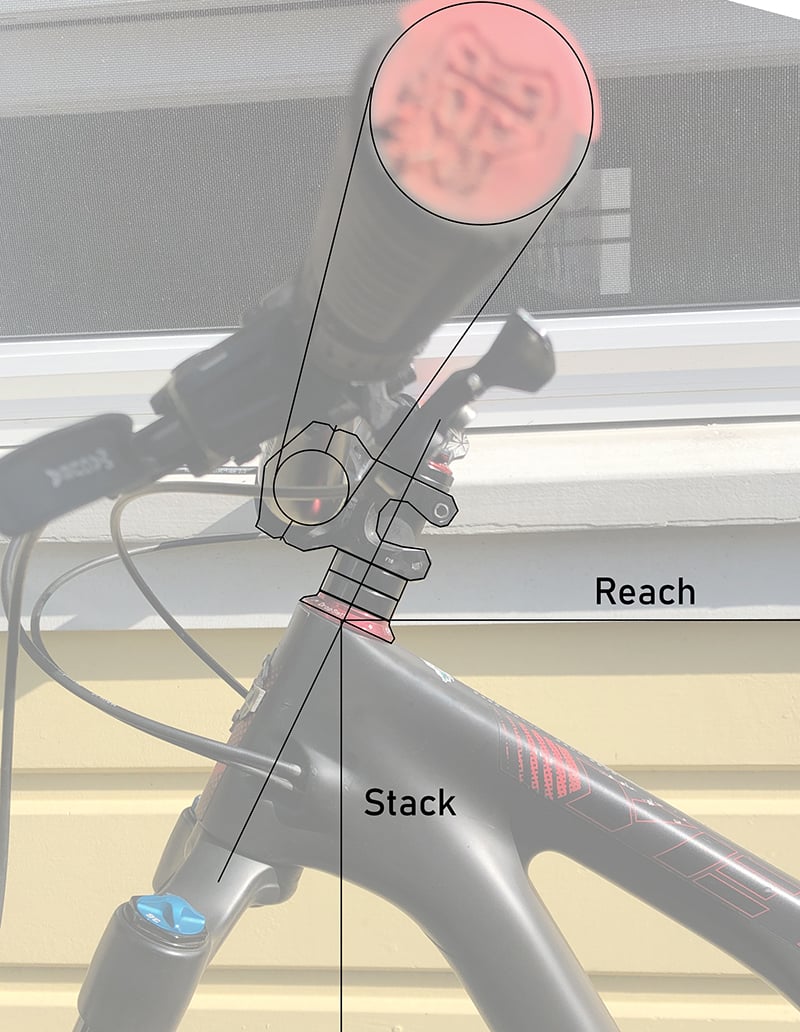 But, so what? Well, what it means is I (we’re going to come back to seat tube angle later so hang on for now) could fit on a bike with notably shorter reach if it had a taller stack.

I run a 40mm stem on the SB130. I’m comfortable riding 35-55mm stems, beyond that I think they start to change personality too much. Adjusting the measurements for the headtube angle we can look at the longest and shortest Frame Reach I could run (at this headtube angle and saddle position).

Longest, lowest bike I could setup

Shortest, tallest bike I could setup

Looking at the numbers in the opposite direction – if the stack was increased (taller headtube, etc) and I went to a 55mm stem how “short” of a bike could I setup? Well, I like to run at least 5mm of stem spacer and 20mm rise bars (vanity’s a bitch right?). So I’m dropping 35mm between the bar and stem spacers.

The 55mm stem allows me to further reduce the reach by 13.6mm. The longer stem increases stack height by 6.2mm.

So, combining the modifications from the spacers, bar and stem I can decrease the reach by 28.1mm if I increase the stack 25.65mm.

That’s a 32.7mm swing from the longest frame to the shortest that I could setup with the same Rider Reach. Right around a 7% difference. Kind of surprising right?

Let’s toss some additional factors in and tease the next write-up! Stay tuned, to be continued, et al right?

All of that messing about with the reach has directly modified the wheelbase if we keep a static headtube angle. We’ll get into that down the line – I’m still penciling out my opinions on how these modern bikes out handle previous shorter wheelbase offerings. I’m leaning towards some balance ratio between the position of the axles and the points of contact (pedals and grips). Bikes like the Yeti, Ibis and Alchemy all allow the rider to really ride “in” the bike controlling both wheels. If I ride central on my SB130 the bike rotates exceptionally well. If I ride way off the back you have to steer off the rear wheel. But more on that later.

Because, well because the next thing I want to look at is how steeper seat tube angles even further muddy the water on reach and stack. You like the word “effective” in geo descriptions? Such as Effective Seattube Angle? Well that means it’s a dimension based on an intersection – but where that intersection “is” shifts the measured angle. Longer legs than average? Well because the actual seatube angle is projecting the saddle further and further back your effective angle is slacker. Shorter legs than the average rider of that size? Your effective seattube is steeper.

One of our pro riders had a prototype bike delivered to test during the off-season. The seattube was SO steep even with a really long “reach” number for a Large you’d jump on the bike and SWEAR it was a Medium.

Update 5-6-20: Check out Effective Seattube Angles Explained – a post that helps riders understand how moving forward in the cockpit has provided more balanced bikes, although upsizing has become more of a conversation again.