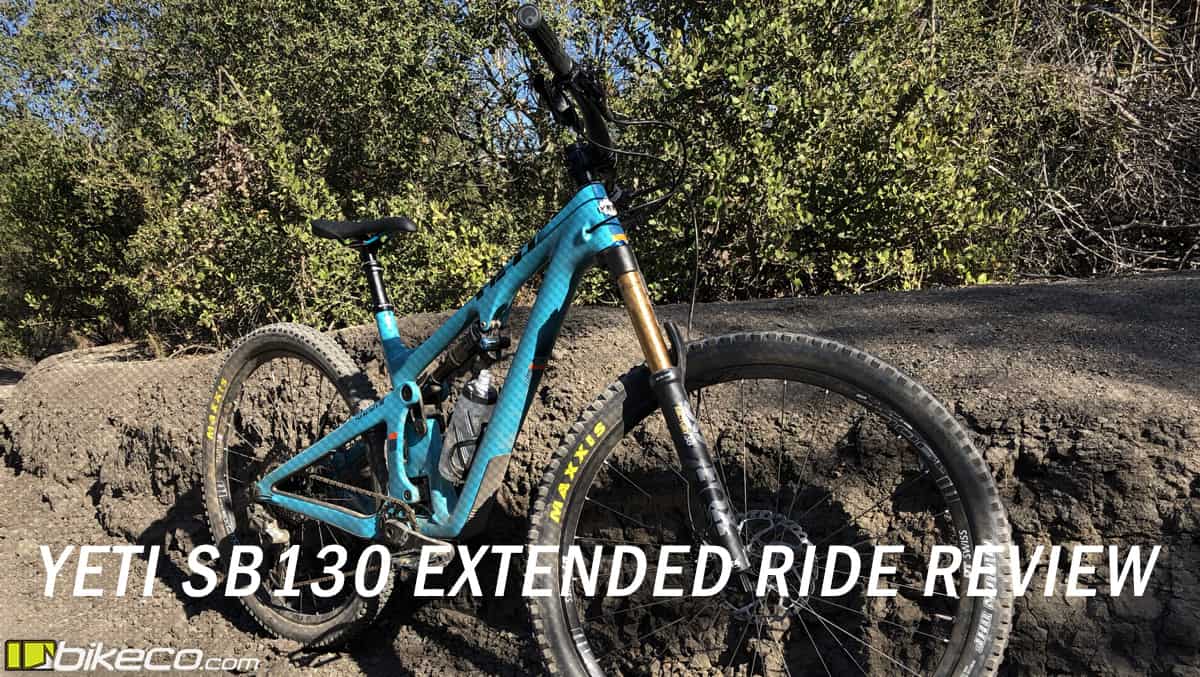 Ok, Ok, Ok. It’s a BikeCo demo so I need to let clients ride it I suppose… Here is my Yeti SB130 Extended Ride Review. (I’m still going to have to check in with it now and then though…)

Let’s go over the SB130’s Personality, Fit/Geo, Build as well as Disposition.

Yeti’s magic has been in the evolution of their race proven geometry paired with Switch Infinity suspension. The SB130 rides confidently in terrain that seems like it would eat up 130mm bikes without losing the “all day” feel you expect in a 130 rig.

If you haven’t seen it here are my initial thoughts on the SB130 – I was blown away with how fun the bike was. Well, I’m still blown away.

On the first ride I had noted a couple pedal strikes, not unusual for me on a new bike. Sidenote: A couple rides later I figured out what I think this is from, lack of lean angle in the first few corners familiarizing to a new bike (more here on bottom bracket and crank arm length). Once I had the confidence to properly lean in I didn’t have any more issues.

The SB130 climbs better than I climb – which it should, I’m not a hell of a climber!

I test efficiency by jumping on the gas out of corners and feeling how a bike comes back to speed. The SB130 is awesome under power. It blasts up to speed without being, ah, shall we say unnecessarily dramatic? Have you ridden the bike that you can’t pedal until its straight and upright or the back end will do whatever it wants? I have. Inefficient and often ends up off trail… The SB130’s traction is good giving it a confident feel shooting into the next straight.

While the SB130 is confident in chop it doesn’t feel like a downhill bike, which is nice. I still enjoy the pilot rather than passenger feel on a mountain bike. I felt confident that the SB130 would run any trail that I would without giving up very much along the way.

At 6’1″ the Large was an easy choice. The bike is outfit with a 40mm stem which was comfortable. There was no chance that I was going to be able to ride an XL. It took a mile or so to familiarize myself to the steeper seat tube, which I see clients in the parking lot review as well. Trust the steeper seat tube – it’s good! Way less sitting on the front of the saddle in steep climbs.

If you have questions on fit & setup our team is unmatched on spec and setup. We also work with clients after the initial sale to dial in their bikes.

I’ve often written about how you’re unlikely to fall in love with a demo bike – just a lot of factors. Here are my personal notes on key factors of the build and how it affected my ride feel (and opinions).

Fox Fit4 – great fork for a wide range of riders. Pro Tune it. The small bump compliance gains are notable.

Fox DPX2 – works really, really well on this bike. If I bought one I might try a small volume spacer or mess with the low speed compression for a touch more support. Probably would work with compression first as the bike has great “pop” and I’m not sure I would want additional ramp on that pop.

Wheels – we mounted last year’s spec wheels from the Yeti 5.5. They are narrower than this year’s rim. They also don’t have the 36t star ratchet. Buying a factory X01 build this year? Stoked. You get the 30mm internal rims AND the 36 tooth star ratchet with the M1700 wheels. I hated the 18 star ratchet. Sure I could learn to pedal better and not have as much “thump” through it. But, I’m probably not going to. It’s funny cause this small thing was frustrating me pretty heavily!

X01 Eagle – compared to my personal 11sp bike it was nice having the 50t cassette. If you jump into that bail out before you’re totally blown it gives you some extra life for the climbs.

Shimano XT Brakes – ok, this is my opinion, we all know what can be said about opinions… I can’t ride Shimano brakes. Just. Can’t. The power on power off feel is too much for me. I find myself slowing down more than I need to – or – not using them out of frustration and riding faster than I would… I can’t imagine how these brakes work in an area with consistent moisture. Magura’s for me.

As a 2019 release the SB130 has the latest long, slow, slack (headtube) & steep (seat tube) geo. This geometry gives it a more “enduro” feel than the Ripley LS even though it only has about 8% more travel. The Ripley LS has a notably steeper headtube angle which provides a light, nimble personality while changing directions. Yeti’s SB130 has a bit of a “heavier” front end climbing however the slacker headtube and longer wheel base make it really comfortable at speeds that could make the Ripley LS a bit nervous.

Perhaps a more “apples to apples” comparison is with the Ibis Ripmo. Designed in parallel time frames the SB130 and Ripmo have the steeper seat tubes to improve climbing personality and position. The Yeti SB130 has a slightly slacker head tube angle. It’s listed as a .4 degree difference, which I don’t think I could come anywhere close to defining on trail if you modified them… The SB130 has a 10.2mm longer wheel base (large to large) which again, I don’t think I could pin down in real world riding. I don’t feel like .4″ is keeping me from even the tightest switchbacks on a trail like San Juan, etc.

That leaves us with a couple differences: Ripmo with a bit more travel and DW Suspension compared to the SB130’s Switch Infinity Suspension.

I have a handful of miles on the Ibis Ripmo so I’m not the one to speak to it’s disposition in totality (ask for Chris here – he owns one and can tell you how good it is!!) but I’ve got enough hours on it and my personal Ibis HD4 to help deduce the DW vs Switch Infinity differences.

DW and Switch Infinity bikes are exceptionally balanced fore and aft. Exceptionally – like “to a greater degree than normal”. It is relatively easy to control both wheels on both Ibis and Yeti chassis. This makes riding at speed or in steeps much more confident. Lesser suspension designs which require tons of body english driving weight from bar to rear wheel. DW & Switch give you plenty of confidence in a standard attack riding position. Riding actively will improve performance, but it’s not a requirement to have the bike stay on trail in normal conditions…

Both the DW & Switch Infinity suspension provide excellent traction under power. Each are extremely confident in descents. I feel the Switch Infinity has just a bit more “pop” to it when I’m pumping the trail and really pushing the pace. Now, whether you like that or not – it’s up to you!

Glass half full – you could define “pop” as being free speed as you pump the trail. “Pop” could be quicker handling in and out of corners. Glass half empty – pop can send you off the trail if you’re not ready for it. It can feel a bit nervous in direction changes.

Sooooo, if you were looking for me to vote between the Ripmo and SB130 – can’t do it. Both are legitimately so good. Both have incredible tune windows to dial in the bike’s personality. Chat with our sales staff to help define whether you prefer Switch Infinity or DW.

4/10/19 Update – Yeti released their Lunch Ride SB130, well it turns out I’ve been running this suspension setup for a few months. Check out a Lunch Ride Suspension Review.

Ready to go on your SB130? Check out Yeti Factory Completes then chat with our sales staff for the best spec, setup, tune and pricing in MTB.