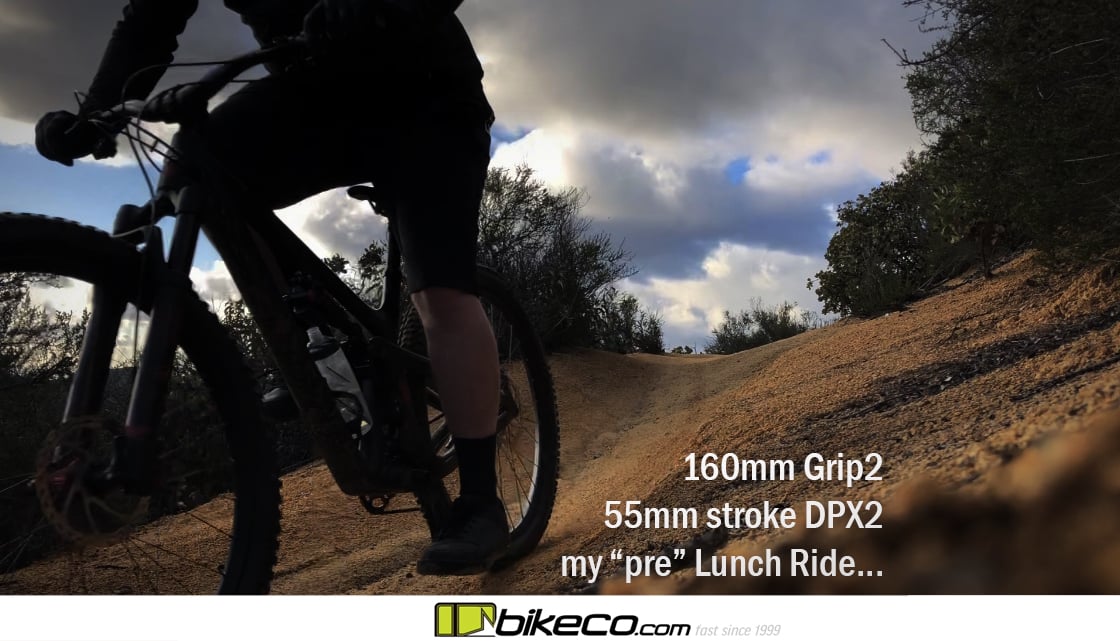 Yeti launched the new SB130 Lunch Ride kit yesterday. But it turns out I’ve been on one for several months now! So now that the cat is out of the bag on the 55mm shock stroke lets take a quick look. Here’s my Yeti SB130 Lunch Ride Review (based on the Lunch Ride Suspension Setup)

Starting at the fork – the 160mm Grip2 option is something we’ve put a lot of clients on already. In fact we have some extended reviews on that aspect of the bike already.

For a quick review on those.

Both are great dampers frankly.

The updated Fit4 has a low speed compression control that is useful in the steeps to dial in a bit more support. The Fit4 comes alive a bit quicker than the more burly Grip2 making it a great option for more conservative riding styles. The Fit4 also offers a 3 way pedal platform great for long adventure days.

Grip2 offers high and low speed compression as well as high and low speed rebound. The Grip2 is less likely to feel overwhelmed in the giant chunk – although I do mean giant chunk at that point. Unless you’re riding at hero speeds all the time the high speed rebound feature isn’t really utilized. I ride the Grip2. Partly because its what I wanted to see on the bike and partly because I feel like it has a more sophisticated compression control feel.

Again for more details check out the previous blogs. Really abridged here: The 150 gives the bike more scalpel like performance. The 160 allows a more smash mouth personality particularly if you’re willing to give the bike some slide. If you chalked a line onto a turn the 150 would more likely track both wheels on it, perhaps a little slower. The 160 allows you to come in a lot hotter, and I think exit faster in most conditions, but might not have the laser like precision. It’s a personality game really.

The beauty of the modern Fox lineup is that the air shafts and dampers can be changed. Have a 150 Fit4? You can have a 160mm Grip2 without a whole new fork. 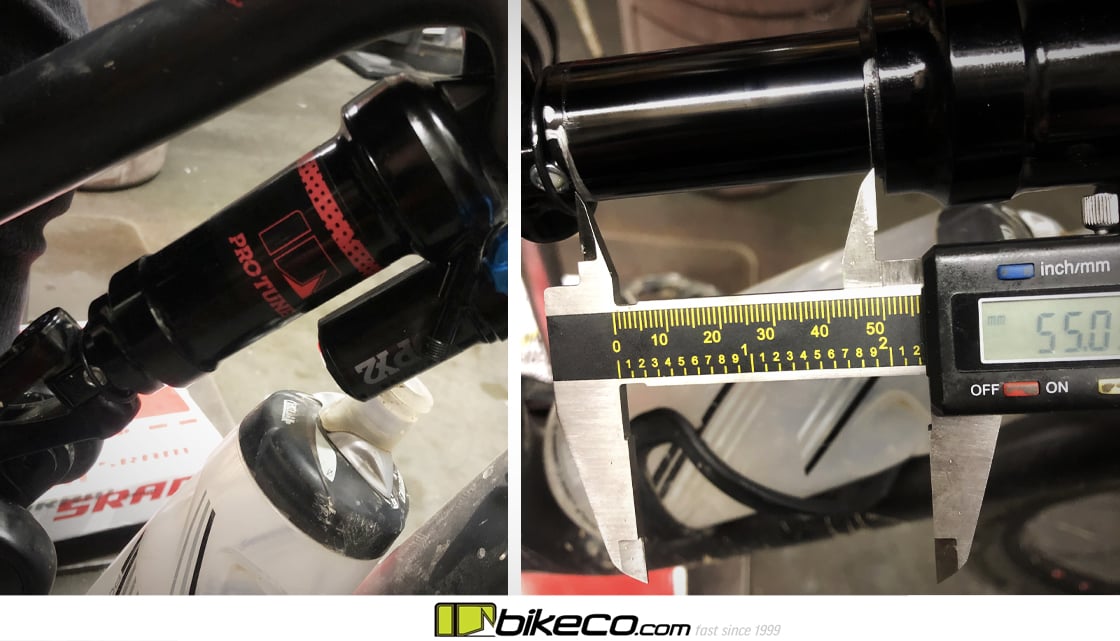 So onto the 55mm stroke rear shock

Typically Fox produces a basic eye to eye shock and will utilize stroke spacers to limit the travel. It’s unlikely to be economically viable to be building 52.5 and 55mm individual chassis.

SOOOOO, when Joe changed my Factory Kashima DPX2 into the Performance Elite DPX2 (100% for vanity because I wanted all black) we noticed the spacer. And because we are BikeCo we pulled it out.

After cycling the shock to bottom a few times we decided it was worth a go.

We kept this under our hat so to speak for a handful of reasons. Mainly the average rider is going to have a hell of a time removing it, bleeding the shock etc. Also – until Yeti acknowledged their Lunch Ride we didn’t think it was worth potential warranty concerns.

So how does the extra travel ride? Honestly except in my bigger “whoops” moments I doubt I noticed it. I can see where pro riders might enjoy that extra bit – but I don’t ride at that aggression level. If I’m hard bottoming this bike I probably made a mistake and am trying to ride it out! haha…

We had done some basic algebra and estimated 4-5% more travel was added by extending the stroke. It’s tough to fully know without a cad model as the input angle can change slightly as well as the rear wheel arc, etc. I believe I read that Yeti says its 6mm more – which falls into our numbers.

The thing is – with a well spec’d shock like the DPX2 on a good suspension design it’s going to be hard to feel that last few mm. The bike won’t be there but for milliseconds as the air pressure ramps hard at the end. But, again, if you’re pushing that hard it’s nice to have it.

In theory the 55mm stroke opens the doors to some other dampers. Again though, the Fox DPX2 really is a magic offering for the SB130. The personality meshes so well with what I see the SB130 as: a bike equally at home on all day adventures or a quick enduro rip. I had lined up a test Fox X2 but never mounted it to the bike. (Note: I believe it would mount but I never even test fit it so I can’t say for certain) I decided that the X2 would be too linear for the SB130 in my opinion and kept the DPX2 on there.

You’re going to feel the fork more than the rear shock. I’ve got a lot of hours on both shocks and extending the bottom out, for my riding, didn’t make too much of a difference. There are certainly riders who live deeper in the bottom out and they will appreciate it more…

You could do either suspension mod individually if you wanted. Chat with us about the “why’s” for that.

I’m stoked that Yeti did come out with the “over-stroked” rear shock so we can offer the option to clients. (I remember years ago when we were building 650b conversions having quite the conversation with an ex-vendor who was saying what our suspension department was doing couldn’t work and we shouldn’t and blah blah blah. Then like a month later they had the SAME BIKE… Adventures in the bike industry. ) Anyhow I was feeling pretty SkunkWorks with the tricky shock. Then we started hearing grumblings about it and now, factory acknowledgement. Cool stuff.

Do you need it? Wrong way to look at it! Do you WANT IT? At some level these bikes are mechanical artwork. What do you want to know is in your garage? While I’m not sure I feel it all the time I do dig having the “special” setup.

Questions? Reach out to our team to discuss the options to update your existing SB130 or to spec the perfect one for your riding today!

See you on the trails.